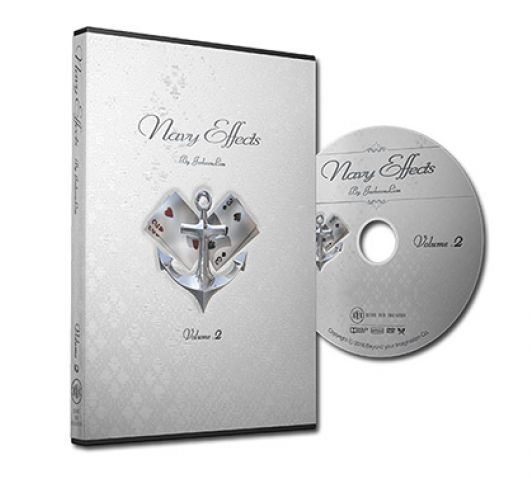 If I’m completely honest, and I do try to be in these reviews, I wasn’t particularly looking forward to writing this Navy Effects Volume 2 review. In the end, this card magic DVD was better than I was expecting, but I think will appeal to a very particular kind of audience. As I will try to explain…

You’re supplied with a DVD and a small selection of gaff cards which will be useful in a couple of the effects. The DVD is in three sections which we’ll look at in turn.

This is the shortest section lasting only about 13 minutes. It covers around 8 moves – most of them fairly common (side steal and palm, classic and riffle pass, spread pass, snap change, slip force, and spread force cull) and a couple of more unusual ones (‘multiplying cards’ – which essentially a way of handling 4 cards as 1 and Pinky Shot – method for flipping out a card using your little finger – both of which were taught on his earlier 2-DVD-set Challenge).

As you can tell from the maths – there isn’t time for a great deal of detail in these explanations. Moves are shown from a couple of different angles, but the explanations are pretty minimal. My assumption is that this DVD is aimed at someone who already has some proficiency in card magic and manipulation.

That being said, the use of some very visual elements and of transparent cards do help to make clear what is happening. Apart from the 2 moves mentioned, these are not new versions/techniques – so if you’re fairly familiar with card magic you can probably skip this section without too much risk.

The second section is the longest section at 31 minutes and teaches (as its name suggests) 8 different colour changes. Or color changes if you insist on the American spelling.

If I’m honest – before I watched this I couldn’t imagine how 8 colour changes could possibly be different and worthwhile. Whilst in all likelihood I won’t use any of these, I was in the end impressed by the diversity of styles! Maybe one will grab you in particular. Briefly, the changes are:

Scanner change – a ‘classic’ style change as the hand is passed in front of it; well covered. Very visual. 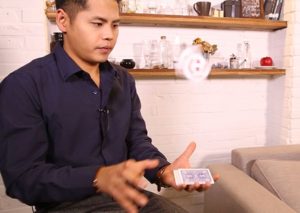 Stunt change – the card appears to change as it is tossed into the air and caught again.
VB Change – card appears to change instantly with minimal cover. If you’re wondering, the VB stands for “venetian blind” – since your ‘cover’ hand looks a bit like that!
Rising Change – a card changes while outjogged from the deck with the slightest shake.
Spit change – card is dropped/spat from your mouth and changes on the way. Amazing!
Boom change – four cards changed at once with a wave. Surprisingly one of the easier changes to my mind.
Panorama change – allows multiple changes in the hand. I thought this was the weakest change of the lot.
Navy change – this change takes place in the middle of the deck. A card is turned face up in the middle of a culling type action and changes instantly.

For me, the best bit of this section was the groovy background music during the explanations.

Navy Effects Vol 2 finishes with Jaehoon Lim teaching 4 routines over the course of around 28 minutes.

Rising Card – a card is chosen and returned to the deck. One card rises out of the deck – not the chosen one. It then visibly changes into the chosen one. As you will gather all the routines are really opportunities to showcase the moves taught earlier. If you’ve master the rising change this is going to be pretty straightforward for you. Some things are assumed in the explanation – e.g. controlling a card to the top. But as I mentioned earlier, this isn’t really a DVD pitched at beginners.

Three Seconds – a card is chosen then returned to the deck. You locate the wrong card – it’s value changes 3 times and on the final change into the selected card. The card then splits into four cards – and the indifferent 3 turn into 3 of a kind matching the chosen card. The final phase requires the use of some gimmicked cards (supplied) and as mentioned, this is mainly a vehicle for the moves taught already.

Navy Aces – a card is selected – it then changes into an ace – then the other 3 instantaneously appear; a moment later those 4 cards change back into the single chosen card. The deck is shuffled – and spread to show that the 4 aces are reversed in the deck and trapping a single card – the chosen one of course. I thought this was the only one of the 4 routines that actually had an interesting/engaging plot.

Weirdo – a card is selected and lost. Performer finds the ‘wrong’ card which instantly turns into the right card. This card continues to change back and forth – then all the other cards lose their faces (a la nudist deck) and then they return to normal – but somehow the spectator’s card has lost it’s back.

As you will gather, I didn’t find the routines particularly engaging. I love card magic but found some of the routines a bit dull. They all seem to involve the premise of a mistaken location – which you might expect on a DVD really pushing various ‘colour changes’. This goes down to personal taste and opinions on the construction of routines. For me a colour change is a nice extra bit of magic in a bigger routine, but doesn’t quite cut the mustard as a routine in itself.

If I was going to be really critical I would add that for me, some of the handling looked a bit awkward/contrived. You will certainly need to put some work in to the move to get smooth. But if you persist you will have some very visual and unusual magic at your fingertips.

This would be a great DVD for someone who loves their card magic and wants to impress their friends at the local club with some new moves. I’d certainly watch it if I was stuck on a boat during national service…

Navy Effects Volume 2 is available from magicshop.co.uk for £24.50