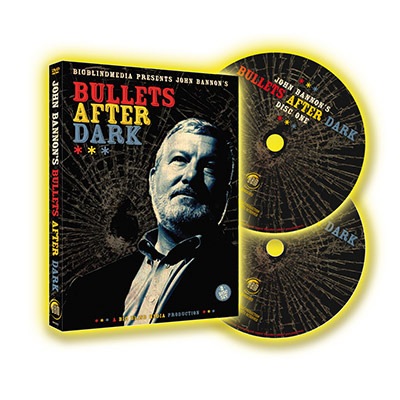 I need to start with a confession. I love John Bannon. There. It’s out in the open. So as you read this review bear that in mind. And I will do my best to be objective. And since this review is written for Bicycle-Cards.co.uk I should mention that Bannon uses an interesting Bicycle deck throughout the DVDs – not with the standard Rider back. Bonus points if you can identify them! 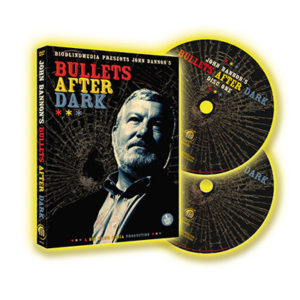 I was delighted when a review copy of this Bannon two-disc set landed on my desk (well, technically it landed on my floor having come through the letter box). One of the reasons it has taken me so long to write this review is because I have been busy. The other, is because I didn’t want anyone else to know how good it is.

At the outset it is worth saying that the discs are produced to the usual high BBM standards, though I detect that Bannon’s influence may have toned down the overall design. The title menu picks up the DVD title with words appearing to the sound of gunshots.

The introduction is miss-able, unless you have a liking for quotes, so I will get straight on to the effects.

Dead Reckoning
This is a spelling card location after a very fair looking selection and mix. You will love or hate Bannon’s presentational style, but he certainly thinks carefully about his plots and patter. The very clever ‘layering’ of different techniques produces an almost self-working miracle. Brilliant! (originally published in Dear Mister Fantasy)

Dawn Patrol
This is a card sandwich effect that looks unbelievably fair. It does require a perfect faro (on which he has some comments) – which makes it one of the more technically demanding effects on the set. (originally published in Dear Mister Fantasy)

Doctored Daley
This isn’t a new trick, simply Bannon’s presentational premise for The Last Trick of Dr Daley. I can’t really say more than that without spoiling it. But I like it and it works!

Power of Poker
A brilliant self-working effect where in spite of 10 free choices of the spectator, the performer’s poker hand always wins. Again, clever construction removes the need for complicated sleights.

Counterpunch/Four Faces North
This routine starts with a nice little in the hands variation of the cross cut force which then gets you into a clever 4 ace location where they appear reversed in the deck. That sets you up for a second phase where 3 of the aces disappear leaving only their ‘selected’ one. This immediately leads into a Triumph type finish where again the aces appear reversed in the deck. A little more handling is required for this routine than some, but it is still within the reach of all but the terminally incompetent cardician. During the explanation, some helpful subtleties on handling are described.

Watching the Detectives/New Jax/Full Circle
This is another sandwich type effect where the spectator is led up the garden path before the magic happens. An ace is selected and lost in the deck, and then located between a pair of Jacks. It incorporates a very clever little switch which is dead easy to do. The lead into the next part of the routine does require a multiple shift which may put some off. If you can perform the multiple shift then the routine cleverly moves straight into a further sandwich effect which has some relationship to the One Eyed Jack sandwich of Harry Lorayne (I first saw this in My Favourite Card Tricks – now reprinted with several other books in Classic Collection). The whole thing is then ‘cleaned up’ by locating all four aces again.

Origami Prediction
This is a prediction effect where the spectator makes lots of choices and shuffles, including an ingenious ‘folding procedure’(hence the name) yet the magician predicts the final outcome. Some set up is required. It is more or less self-working though, as with any effect, you need to remember the order of handling. He explains a nice little false cut to start with. This is a streamlined ‘final’ (?) version of a principle explored in the excellent Dear Mister Fantasy. At the end of the trick Bannon briefly defends the use of maths in magic – though I think the trick actually speaks for itself in this regard.

The Einstein Overkill
I first encountered this principle in the Koran Jackpoint Coins presentation (which I first saw on an old Paul Daniels show in the 80s/90s – sorry – end of nostalgia trip). I hadn’t realised this was itself based on a principle that was old even at the time of the classic Greater Magic. This is a clever prediction effect with an extra kicker at the end, though for some people the ‘mathematical’ nature of the presentation may not appeal. I do think the principle has more appeal in a money-based presentation, though the use of cards does mean it can be performed anywhere.

Bullet Train – Iconoclastic Aces/Syncopated Aces/Interrobang Aces
The ‘title track’ and for me one of the strongest sequences in the set. Essentially 3 versions of the ‘4 Ace Trick’ but with all the magic happening before you expect it. Extremely direct, classic Bannon routineing, and not even that difficult to perform. Wonderful. (These also appeared first in Dear Mister Fantasy)

J.B. Flytrap False Cut
As its name suggests, this is a false cut. This one is entirely in the hands, doesn’t look too showy, and maintains whole deck order. It is very clearly and carefully explained in Bannon’s usual succinct way.

Bannon Triumph
Do we need another version? In a sense, this isn’t another version, but a 20-year-old version first published under a different name in Impossibilia. It requires some set-up and Bannon gives some discussion of suitable false shuffles to use at the start of the effect. Instead of ‘righting’ a face-up and face-down deck (with the exception of the spectator’s card) as in the classic Triumph routine, this effect ‘rights’ all but one suit of the deck – which then reveals the spectator’s choice as the only missing card in the sequence. Because of the slightly different plot, it enables the ‘Triumph’ part of the routine to look particularly fair.

Bannon’s style wont be to everyone’s taste. Nothing ever is. He has a very ‘measured’ performance approach – perhaps something to do with his legal background? – but it suits him. His cleverness often lies in very careful routineing to eliminate difficult sleights, but there is an occasional payoff as routines sometimes feel slightly ‘procedurally’ heavy. On the other hand, if you are interested in developing your own routines (and I hope you are) then his comments on the thinking behind the construction of several of the routines is very stimulating and helpful.

I very much appreciate his honesty in attributing influences and sources from which particular routines have been developed. If I had one criticism, it would be that (as you will see above) quite a lot of the material has been released before, in print. So if you are familiar with his books you may crave some more new material. On the other hand, it is always good to see how the originator performs his effects, and some of the effects have ‘matured’ since publication.

The bottom line is that there is some really excellent magic on these DVDs. For me, I think I will always slightly prefer the books – especially his quirky way of often describing effects as a kind of dialogue between himself and another magician. But the clarity which is a major strength of the books is demonstrated in spades on the DVDs.

Buy it. Learn from it. You will certainly use some of the routines. But please think carefully about your own personality and how you might shape the routines. I don’t want to start meeting a series of poor Bannon clones…

Available from Merchant of Magic for £25.99.