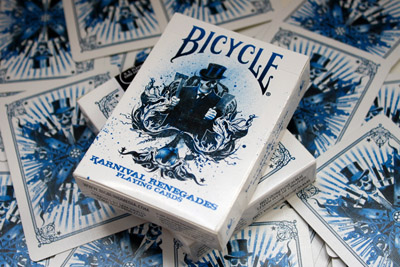 I had to get the words ‘New Baby’ into the title since we’ve just had our first child! I mention this partly as a proud dad, and partly because that is the reason I have only just got round to posting my impressions of the new Renegades deck which BBM kindly supplied to review. Since the cards are officially released on Monday 8th March, and pre-orders are possible now, now seems a good time to say more… 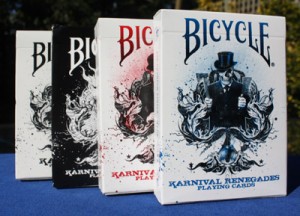 This is now the 4th Generation of the Karnival Deck – which all feature the striking artwork of Sam Hayles. 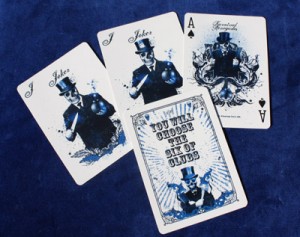 The trademark skeleton, who first obtained ‘gangster’ clothes in the ‘Assassin’ editions, has now been given some new weapons – a knife and a bomb on the Jokers, and a cleaver and an axe on the Ace of Spades.

The pack comes complete with the ‘usual’ extra card which has a reveal (6C) on one side.  There is also a reveal on one of the Jokers (who has a 4S in his hat) and an extra double backed card which is useful for many routines.  There is no barcode reveal on the tuck case as we have seen in all the earlier editions.

Like the previous designs, this one incorporates a subtle 1-way feature in the back design.  I think this is an under-used device in magic – it is often discounted because it is found in so many elementary magic books, but with the right handling can be a powerful tool. 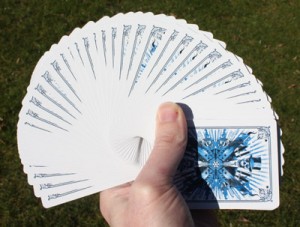 The cards are printed on the usual USPCC  ‘Air Flow Finish’ stock and handle extremely well straight out of the pack.  If you are used to Bicycle Cards there will be no surprises here.  Like all packs they benefit from a little ‘breaking in’ and they won’t last forever, but they perform well and are ideal for all the usual moves and routines. 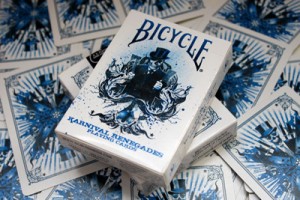 As usual, the appeal of these cards will depend on the kind of magic you do.  Now we have Assasins and Renegades there are effectively a red-backed and a blue-backed Karnival deck – and I can see all sorts of interesting effects involving colour-changes and the 4 different packs.  I wouldn’t use them for children’s magic or the vicar’s tea party, but for the right audience they will go down well.

And if you’re just one of those people that loves collecting playing cards, you’ll have to have one of these limited edition packs.  So get right on over to BBM and order yours now!