The 52 vs Joker Project – review 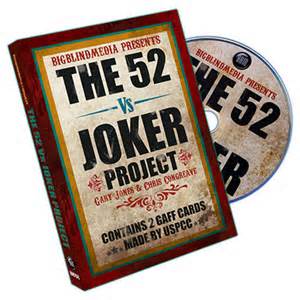 This is in many ways the second volume in the series with Gary Jones and Chris Congreave which started with Dupes. The most annoying thing about that is that it uses the same background audio loop as Dupes – which will drive you mad if you are a reviewer! On the positive side I rather liking their work. As you will probably work out from my review of the rather more technical Card Constructions, I am a fan of stuff which is easy to do so I can concentrate on the performance. These tricks all use either a double-faced joker or the 52 cards on one gaff card – both of which are provided on Bicycle stock. Enough of the preamble. Let’s get to the tricks…

A thought of card appears between 2 jokers after cheesy gag (let’s face it – there are likely to be lots of them given the title gaff and the performers involved). This is easy and effective – though for me the set up (which happens at the start of the trick) feels a bit obvious/without motivation – so I prefer the ‘signed’ version later on the disc (Sign This).

Signed card appears under card box after a cheesy gag. This seems very strong and dead easy to do. It requires basic card control but one of the strengths of the routine is the nice strong misdirection for the actual load of the card.

The J in B Trick

A neat transposition where a spectator’s signed card changes place with another card inside the card box. This made a nice change to the routines so far and is a pleasing effect. It doesn’t use the 52on1 gaff.

This is another interesting transposition effect where the chosen card ultimately ends up between the jokers after leading the spectator up the garden path. In some ways a similar routine to the J in B one, but uses your wallet.

An old trick providing a clean vanish of a spot card amongst 3 jokers. The spot card can reappear wherever you have a duplicate 🙂 Not much new here, but an easy to do effect.

I can’t decide what I think about this one. 4 cards are signed and travel to the performer’s pocket one at a time. The final card disappears from the spectator’s hand leaving an impossible object… The salami from ‘Dupes’ (or at least a duplicate salami!) makes a brief appearance here too. For me this all feels a bit too involved/contrived, which I find surprising because its near cousin from Dupes (Predicto Pocket) I love and use. It requires a bit of palming and an Elmsley count.

Extras
The Sharpie Doctor – a tip to get some extra life out of the magician’s favourite pen.
Top Con Control – an explanation of a move which is used (unexplained) in an earlier routine. A neat way of controlling a selected card to the top.
There are also trailers for my current top 3 BBM DVDs – Dupes, Annihilation Deck and Bullets after Dark.

I think I preferred the variety of effects in the Dupes DVD. I suppose given the title/premise of this DVD we would expect there to be less variety, but I think it is perhaps slightly overpriced for what you get. On the other hand, I really like several of the effects – especially the underbox effect and the J in B effect – and the gaffs are included. So it is well worth a punt.