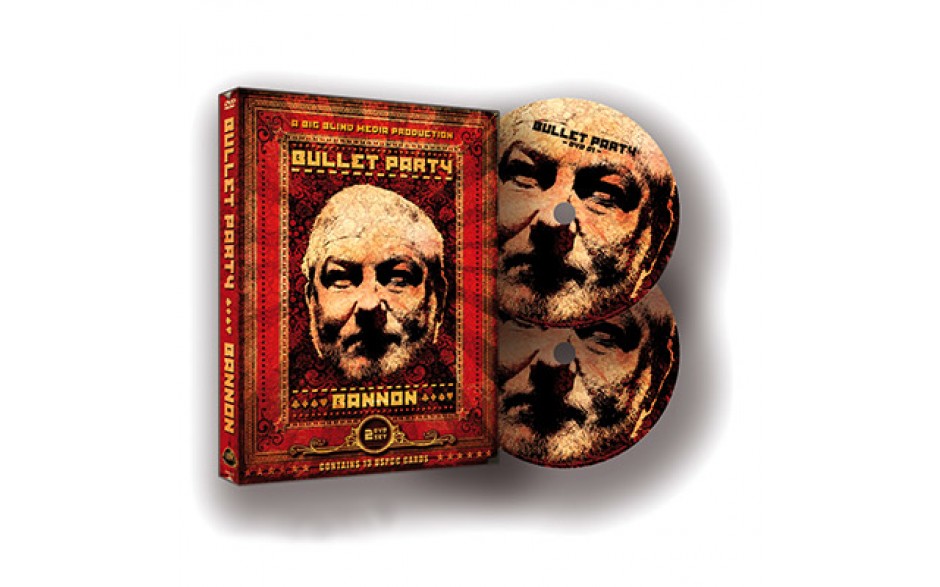 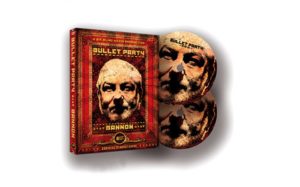 Well we have been excited about the party ever since we received our earliest invites. Official release date is February 25th, but we were fortunate enough to get our hands on an early review copy. But was it a triumph or did it disappoint? Let’s get straight to the effects.

Bullet Party is the name of Volume 1 (and the first effect)
This is a ‘gambling’ themed effect – the original Elmsley 4 card trick was the starting point for this. It ends up somewhere between Twisting the Aces and Rainbow Cascade with a puntastic climax in the form of a cod explanation and all 4 cards change! If you can do an Elmsley count you can perform this trick. Great routine. Loads of nice subtleties (the display of 3 jokers early on is sweet). Classic Bannon!

Final Verdict
Spectator cuts to the Aces. The result of 20 years playing with this particular effect. Once you’ve got into the setup, the trick almost works itself. But you will need a medium proficiency with cards to get into the setup.

Box Jumper
This is a version of a Simon Aronson trick. Chosen card lost in the deck swaps places with a card in the card box. No real setup. A simple Marlo control does the hard work for you Good clean lines if I can use that phrase to apply to the routining of a trick. A great little effect.

Riverboat Poker
An unusual 2-phase gambling routine. In the first part you apparently teach the spectator how to stack a deck for a poker deal. This sets you up for a (to my mind) slightly involved poker deal. It is largely ‘self-working’ though does require a set up. In the right context I’m sure this would be a winner, but I’m not sure I’d ever be in that context…

Poker Pairadox Redux
Based on the classic Nick Trost routine. We saw this when it appeared in the Mega ‘Wave booklet, but it has been improved to allow an instant reset for walkaround. In spite of the name it would work for non-Poker players, and it is self-working. Lovely.

Fractal Re-Call (Revised)
Call of the Wild re-revisited (it was revisited in Mega ‘Wave and this is a further refinement) and now with regular cards. This is not impromptu since there is a stack required. The whole thing starts with a fairly bold switch though Bannon assures us it isn’t actually too hard! An entertaining story accompanies this routine which packs a lot of magic into it. Requires reasonable card-handling skills but worth this bit of effort.

Crocodile False Cut
In the hands false cut based on a Gary Oullet move. No explanation, just a video of Liam Montier repeating it several times. It looks neat, but would have preferred a bit more description here to help [NB this is apparently explained in the Bullet Party book in more detail].
UPDATE – apparently there was an error on the review disc and this is explained in full on the final version. Will confirm when I have seen it…

Mega ‘Wave is the name of Volume 2 (and its first effect)
This is an awesome-looking trick with some great thinking. Related to Stephen Tucker’s Omega effect and a bit like extreme Twisted Sisters. I love the psychology going on here and the real sneaky moves. And it’s all examinable at the end! But you already knew all that if you read my review of the Mega ‘Wave booklet…

Return to Fat City
A sandwich routine with a surprising second phase where every card except the chosen one ends up in the sandwich. Perhaps best of all there is no ATFUS involved! This is one of the cleanest looking sandwich effects I have seen (and I have seen quite a few!) and the structure allows an extra ‘revelation’ in the first phase. I love the way it builds logically to the second phase. This second stage is slightly bold, but it is a great routine.

Wicked
A selected card transposes between two pairs of queens during a nice Wizard of Oz themed effect. The plot helps make sure no one forgets where the cards are. For me this is a real worker. It’s ‘fractal’ and doesn’t require much finger-flinging, and a story always makes a card trick more interesting. It really is wicked!
I need to add a personal footnote here. I was slightly embarrassed to spot that this routine was in the Mega ‘Wave book, and I didn’t take to it so much in print. So I will grudgingly admit that there are sometimes advantages to DVDs!

Bulletcatcher
This is a neat 4-Ace production. It was first seen in a slightly different form in Smoke and Mirrors. It looks neat and is easy to do.

Drop Target Aces
4 aces are buried in the pack but somehow end up in your hand. This will take a bit of practise to get it looking really good, but if you can do an ambitious card routine this should be no problem for you.

Four Shadow Aces
A quick and clean 4-ace assembly. Uses a delightfully simple Marlo switch combined with a really sneaky Paul Wilson subtlety. A nice warm up to a more unusual variation on the theme.

Big Fat Bluff Aces
This starts off looking like another 4-ace assembly, but after the ‘follower’ aces disappear, the ‘leader’ pile is shown to contain 4 kings. Then all the aces return to their original piles again. Follows nicely from the previous routine. A slightly illogical display sequence is required, but this routine is really growing on me.

General Observations
Rather in keeping with Bannon’s slightly cerebral style, each effect is given a brief introduction before being presented. There are a mixture of live and studio performances, but all are well recorded and production values are high.

In the explanations, Bannon is variously assisted by his old pal David Solomon (who mainly sits there without moving), Andi Gladwin, Colin Miller, Jamie Badman and James Went. And it comes with 13 Bicycle Cards so you can get going straight away.

As ever, Bannon is very good at attributing sources and inspirations, and many of these effects have a long pedigree. Whilst this is one of the reasons I love Bannon’s work – because I am fascinated by the process involved in the evolution and routining of an effect – there is a little bit of me that would like to have seen a few more completely new effects. As it is, we have a number of variations of things seen in earlier works (e.g. Dear Mr Fantasy, Smoke and Mirrors, Mega ‘Wave).

On the subject of books he has also published a booklet containing many (though not all) of the routines on this DVD set – though I don’t think that is available in the UK yet.

Conclusion
Well I was always going to like it wasn’t I? I think that everyone would find one or two effects that will suit them, and some people will find lots more. And (at the risk of sounding like a stuck record) there is much to be learned from the way Bannon routines his magic – principles you can apply to all your own magic.
What are you waiting for? Join the party…

(If you prefer a good book, some of the routines are available in the Bullet Party Book.)