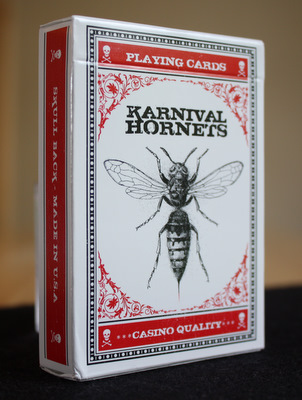 Have your ears been buzzing (and many similar puns)? We’ve been having a look at the latest Bicycle Karnival Cards from BBM – they’re Hornets – and we like them a lot. Let’s see what all the fuss is about. 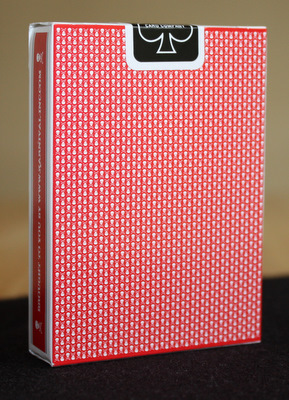 Here’s the back and front of the tuck case. First impressions are good.

In case you haven’t worked it out yet – Hornets look a lot like Bees. And I’m not just talking about insects here! I’ve always like the understated class of the borderless Bee design, and that immediately inclines me towards these Hornets. 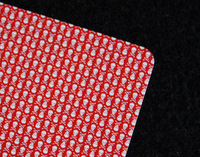 But as we know, Sam Hayles and the BBM folk are obsessed with skulls. So if you take a closer look at the ‘pleasing geometrical back design’ you see that it actually consists of skulls (and crossbones). Lots of them. All over…

The skull and crossbones and the hornets themselves also feature on the Ace of Spades and the Jokers (which bring in the inevitable skeleton too! and a 3S reveal). But all rather tastefully done. 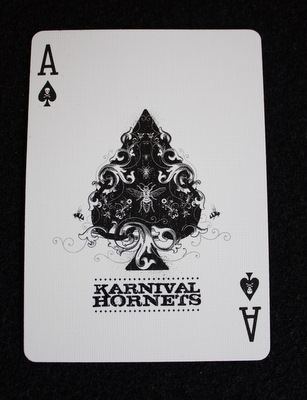 If I’m honest, what I like most about the deck is that you don’t really notice the skulls at all. Now I know that a lot of the BBM faithful won’t understand that – but skulls don’t do it for me that much – which was why until now my favourite Karnival deck was the Karnival Ryujin.
But I think the Hornets may have taken that crown. And I love the slightly mesmerising effect of spreading or fanning the borderless deck (see pictures below). 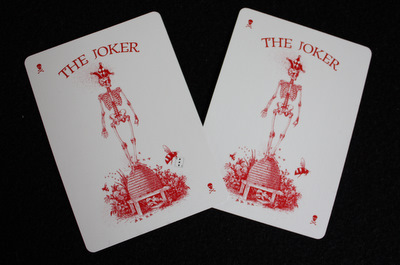 Before we leave the appearance of the cards, the faces (apart from the AS and the Jokers) are classic Bicycle faces and easy to read. You are also provided with a rather odd extra card (not pictured here, sorry) – which has a Hornet back, and most of the front of a Karnival Dose but with a ‘torn away’ effect in the corner revealing the pip of a 6H. Don’t really know what that is useful for apart from advertising…

I should also just mention there is the almost obligatory barcode reveal on the tuckcase.

We need to say a word about card quality and handling. A new deck is incredibly smooth and slippy – handles like a dream. It is apparently printed on Bee stock – and I still don’t know if I’m imagining it but it feels slightly thinner. But there are few sleights that will be hindered by this – and many will actually be helped.

Feast your eyes on what I consider to be the attractive geometric effects of a stacked, spread and fanned deck before you read our conclusion… 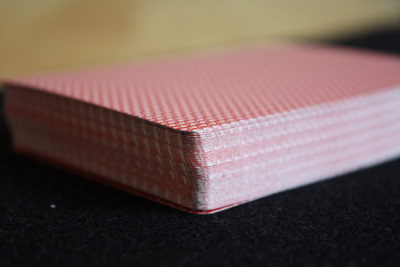 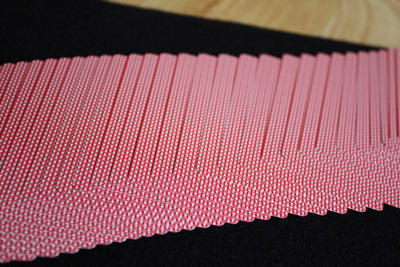 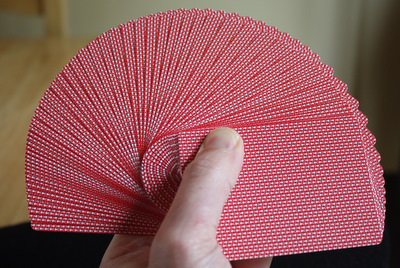 All in all we’re a big fan of the Hornets. In Karnival terms it feels to be an understated design which is very pleasing on the eye and handles beautifully. Available right now direct from BBM for £4.99 + p&p.

And watch this space for our Christmas competition and the chance to win yourself a deck!