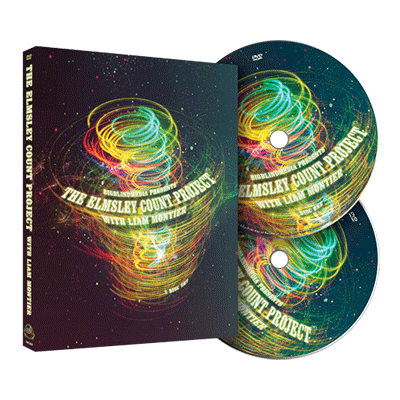 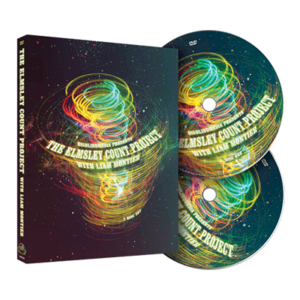 We’ve been sitting on this 2 disk DVD set for a while – but it was well worth waiting for. Though it hurts us to say this on bicycle-cards.co.uk, I should warn you at the outset, that Liam uses Aviator cards all the way through! And whilst we’re on full disclosure he has a slightly unsightly plaster on his left hand thumb nail which I found slightly distracting as I watched. But don’t let these things put you off!

The Elmsley Count is undoubtedly an important move in card magic. But Liam argues that as a group, we magicians have often done it without thinking carefully about it. So he has researched lots of the literature on the move, and tried to bring together lots of tips and his own experiences to explain the move exhaustively.

So after a short history of the move, he moves on to teach it. The count is taught in painstaking detail – with each tiny step explained and analysed. Every beat of the count has its own menu entry so it is easy to come back to the details. There is a helpful discussion of the movement of your hands, rhythm (which is usually the ONLY thing talked about), and the use of the count with larger and smaller packets.

The next section looks at a number of variations on the count. Each one is first demonstrated, and then explained carefully.

Ed Marlo’s Opec Count is a kind of ‘out of position’ Elmsely.

Jack Parker’s Outjogged Elmsley – I’d not seen this one before and it is a very fair looking variation.

Pinch Grip – this is the version I first learned in my first trick with the count – Walton’s classic Rainbow Cascade. On a slightly geeky magic note, Liam says this was originally a Jack Avis handling with jumbo cards – but I first saw it in Ed Victor’s EYE trick – which I think might have predated, and possibly been part of the inspiration for the Elmsley count. But either way, Liam clearly doesn’t like it!

Snap Count – this is an Elmsley with sound effects! Particularly useful when you are emphasising the number of cards.

Dai Vernon’s Twist Grip – to avoid some of the problems of repositioning cards between different count grips. [If you listen carefully on this explanation you can hear someone’s kids in the background!]

Vertical Elmsley – a variation for use when seated at a table – I’ve also used it with jumbo cards when standing up.

The next section includes some Other Counts

Jordan – this classic goes with the Elmsley like horse and carriage.

Spirit – this is more related to the Jordan count and shows 2 as 4.

Discrepancy City Display (Bannon) is used in one of my favourite impromptu tricks (which is explained later on the disk).

Siva Count (Jack Avis) sort of a combination of the Elmsley and Jordan counts.

In all this is a really useful set of counts and variations. Time for a quick bit of nostalgia by way of approving of this disc. One of my earliest and most treasured books was the classic counts, cuts, moves & subtleties. It was about 20 years ago I first laid my hands on that and it was a fantastic way to learn some of the most useful moves in card magic. If I was starting all over again, this section of the DVD would be a really serious alternative – especially for those that don’t like books so much.

After a brief tutorial on making multiple lifts in a small packet (using a Bro John Hammon technique) we get into some really strong tricks which utilise the count.

Four Card Trick – Alex Elmsley’s classic. If I am honest, I didn’t really enjoy Liam’s presentation of this. But it remains a great trick with a kicker ending and ends clean. You can also enjoy the sound of sheep bleating in the background of this and many of the following effects!

Twisting the Aces – Dai Vernon’s classic. A wonderful economical effect. Hard to know what to say, except everyone should know this routine.

The Odd Man Out – Liam Montier – I’d not seen this before. But it is a nice engaging presentation with lots of magic. And it ends clean. Great stuff.

One Too Many – George McBride – close up version of classic 6 card repeat. This is a whole pack trick not a packet one and can therefore be performed anywhere. It’s a great routine – and in Liam’s version has no need for palming. A real worker.

Que Sera Sera – John Bannon – this is one of my favourite impromptu effects. A really cheeky (in method!) prediction effect which is strong in performance and easy to do. I can’t remember where or when I learnt this – but the presentation on this disk works better than the one I had remembered from before!

Jacks in the Box – David Solomon – here’s a clever sandwich and transposition effect which all takes place in the card box! Some clever routining enables a lot of magic to take place with very little work on your part.

Whisperstition – Liam Montier – this is another clever bit of routining, which shows you the power of the Elmsley count in the context of a whole deck routine. You get 2 revelations of selected cards plus a clever transposition in this conjoining of a number of different effects.

I have always loved packet tricks. This set has got me to revisit the wonderful world. Although I often think of the Elmsley count as something to use with a special set of gaff cards, some of these really strong and impromptu effects show how versatile this count is.

The explanations are very clear, and a pdf is supplied with all the credits for the routines (though it does reference one trick ‘The Montinator’ which does seem to have made it to the final cut of the DVD!).

Whilst this would be a brilliant set for someone just starting out in card magic and wanting to learn the move, I think even experienced magicians would pick up some useful tips, or learn a couple of strong routines from this. So it comes highly recommended.

Available from MagicShop.co.uk for £22.99 (at the time of writing). Many thanks to BBM who suppplied the review copy.