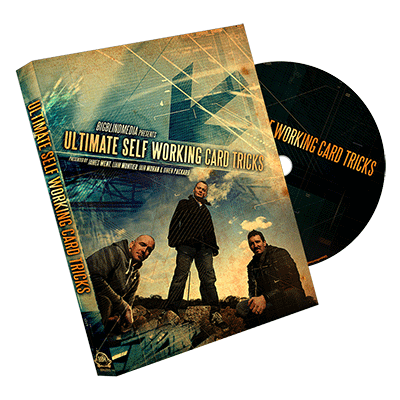 There is no shortage of magic books and DVDs on self-working card tricks – so do we need another one? Well I have to admit I’ve been looking forward to this one. The boys at BBM have been saying it’s their best yet, and to be honest aren’t we all looking for material that’s easy to do so we can concentrate on presenting it with punch? Does it stand out from the rest? Let’s stop waffling and look at what’s on the disc…

This is apparently one of Iain Moran’s favourites. A pack is shuffled, then a chosen card is found in the fairest way, and is compounded by a 4 ace discovery and a separation of the pack into the colours. Needs a table, some set up and a bit of drawn out dealing, but a nice and impressive looking effect.

A ridiculously fair looking card location where the spectator seems to do all the work. Quite likely to fool any magicians that haven’t watched this DVD too! A really neat, also genuinely impromptu effect. 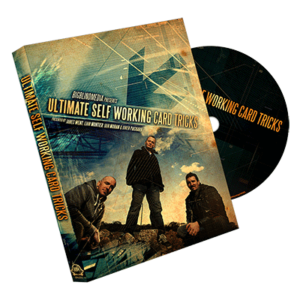 Unfortunately the explanation button for this one takes you to the explantaion for Shuffleboard! The boys at BBM have been informed and I believe they may re-issue it.[UPDATE 12/07 – BBM tell me these have now been replaced] But you can actually get to it by using ‘play all’ and skipping through the chapters. This is a really cool effect (previously published in the classic Art of Astonishment Vol 3). Under a story of explaining how to handle cards and loads of fair mixing, the spectator manages to locate the 4 aces. And they won’t have a clue how they have done it. A small set up is required (and a table needed) – but the payoff is massive! Love it.

This is one of the newer tricks on the collection! It has a nice hook/story and an impressive feat of ‘seeing without seeing’ – all looking very fair. Well constructed routine with a big finish – and essentially moveless. A bit of set up required, but again a very strong effect which is worth it.

Spectator finds 4 of a kind from a borrowed shuffled deck. I particularly love the cheeky (and highly efficient) way the set up is done before their eyes. It does need a table but I just love this. In fact by this point on the DVD I am struggling to decide which is my favourite routine!

Your Aces are Marked (Terry Lagerould)

This is a triumph-esque effect with a 4 ace finish. It is very visual and really convincing. The routine easily lends itself to a patter line and is easy to set-up. A table is needed but this is very strong and ridiculously easy to do.

Shufflebored is one of the most well known effects on the disk (originally published in a booklet of its own, then re-published in Bound To Please). An amazing effect where in spite of very fair shuffling and mixing you have predicted the final state of a deck of cards. Needs a bit of space to perform, but will leave them floored.

This is a clever little prediction effect where the spectator does all the work. For me it is a little ‘procedural’, but it is the sort of trick that you will fool yourself with. Easily set up on the fly. In the right place and with a lively presentation this could be a winner.

Impossible (Larry Jennings)
As Iain Morain says – Larry Jennings is not a name you usually associate with self-workers – but this is a blinder! Like the previous effect, it is slightly procedural. However, for my money the impact is much greater than 716 Club. (You can see this in print in The Classic Magic of Larry Jennings)

This is a really fair looking card reveal. A spectator freely cuts to a card which is lost in the pack. Cards are dealt into some playing card hands and you can then locate their selection. It uses a borrowed, shuffled deck – with no set up. But there’s a lot of dealing going on, so you will need some good audience management to keep the interest going. You won’t really understand how it works even when you know how it works!

An intution testing effect. A shuffled deck is separated into two sections by suit which are then dealt out and end up in pairs. Takes a lot of space, requires a lot of setup, there is a lot of dealing and a time-consuming separation of the pack.. This is really the only trick on the DVD that doesn’t tick any boxes for me. I may be guilty of not reating like a lay-person here, but this one isn’t for me. Liam and Owen keep telling me it’s a killer but…

Extras
Some false cuts and shuffles are taught so you can add conviction to any routines which require a setup. There is also an interview/tip sections which address some of the concerns folks might have about ‘self-working’ tricks. There is a good emphasis on the need to put in thought and practise on the presentation in order to sell them. Don’t ignore this section – there is some key information here – especially if you are new to performing magic. Lots of valuable tips from a variety of performers.

Anything else to say?…
I really like the titles on the disk, but the nit-picker in me spotted that there are some variations in the way names are spelled etc. [UPDATE – I double checked this and in fact there is only one name which is spelled differently between the menu and titles] It doesn’t really matter, but combined with the wrong link on the menu for Shuffling Lesson this just makes me feel like there wasn’t quite enough attention to detail. But these are really very small niggles, and the quality of the magic more than makes up for it. I also appreciate the way that most of the effects have a brief introduction about their inventor. There is also a tantalising credit at the end about returning (volume 2?) with a Bannon!

For me this is one of the stand-out releases of 2012. Loads of good magic that is within the reach of magicians of all standards. But please take the time to come up with a decent presentation so that you don’t squander the goods…

Available direct from the Merchant of Magic (£19.99) or all your favourite dealers…