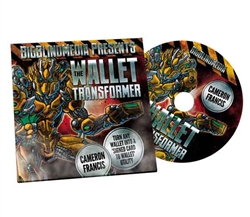 There’s lots of new magic being produced all the time – sometimes, it seems just for the sake of the magic companies to make a pound or two. What immediately grabbed our attention about Cameron Francis’ latest clever idea is that it tries to solve what we perceive to be a genuine problem. If you’ve been in card magic for any length of time, you’ve probably got some version of card to wallet. And more often to not, a wallet which works well for this effect isn’t suitable as an ‘everyday’ wallet. Enter the Wallet Transformer.

If, like so many other magicians, you love collecting wallets, you won’t get one with this effect! Instead you are provided with the materials to assemble a gimmick which, as the name suggests, you can use with pretty much any wallet.

The gimmick is simple – both in working and in assembly – which always a bonus. Some construction is required – but it doesn’t require you to be a craft guru. The simplicity means there is little to break, and the gimmick should last a decent amount of time. But it would be easy to repair/replace if needed.

As ever with BBM produced items, the explanation is clear and complete. Every detail of constructing and using the gimmick is covered and a basic routine (though you can add it to the conclusion of pretty much any ACR or whatever it is you do).

This is a very clever solution and the effect is extremely convincing. Can’t say too much more without risk of exposure. The demo video is accurate. The effect calls for basic card handling skills but no palming which makes it accessible to most performers. It really can be used with pretty much any wallet, and a couple of common types are shown.

The ‘basic’ routine provided is very usable. The first phase is a sandwich effect very similar to a routine I first saw in Karl Fulves’ Self-working card magic – but none the worse for that. Then comes the card to wallet. We liked the routine, but as we’ve said you could add the card to wallet as the last phase of any favourite routine.

A bonus effect is on the DVD called ‘3 Card Money’. This is a very clean card to pocket climax to a short monte routine with a signed card. It’s not the most remarkable effect you will ever see, but a nice extra. The DVD also contains a sample episode of BBM tv and some trailers for other BBM effects.

If you have a favourite ‘non-magic’ wallet which you would like to use for CTW then this is a realistic and effective solution. It would also work with some ‘peek’ or multiple out wallets to add that feature if you are already using a different kind of gaff wallet. A great addition to this whole area of magic.

You can pre-order direct from BBM. Release date is 21st February. It will be £19.99 – but if you pre-order now you can use the code ‘TODAYiamrich’ to get 15% off anything.  Sorry – we don’t know how long this voucher code will last.