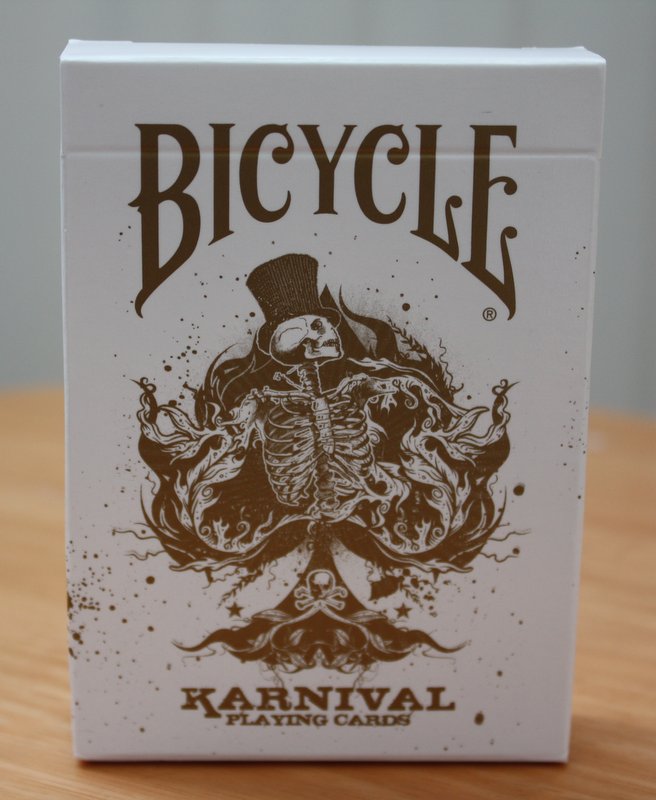 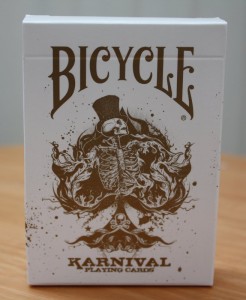 Here are our thoughts about the Karnival Gold Edition deck from BBM.  I’m going to start with a pause for thought – because this new deck looks back to the very first Karnival Deck – which was released back in 2008.  Which make us feel like we’ve been in this game for a long time!

In fact, for the sake of nostalgia, here’s all the Karnival Decks we’ve seen since then (I’ve omitted a couple of BBM releases that don’t quite fall into the Karnival category) – you can click on it to see it in all its glory… 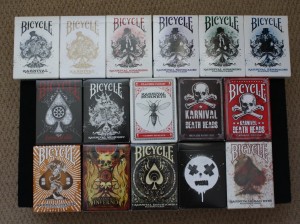 So, cutting back to the chase, what is the Gold Edition Deck?  Well the original Karnival Deck has long been out of print and so this is a limited edition re-run, but (you’d never have guessed this) with GOLD ink for the back design and tuck case. 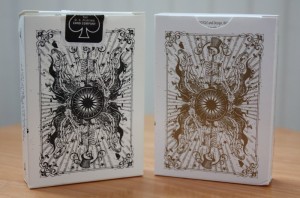 Unlike some other Karnival releases (e.g. the Karnival Ryujin for example, it is only the back (and the case) which use the gold ink.  The faces of the cards are almost exclusively your standard Bicycle Faces (the Ryujin used gold ink for the red pips you may remember).  The only custom faces are on the Jokers and the Ace of spades – and again these are the same as the original Karnival Deck (apologies for the background on this pic – I should have used a close up mat). 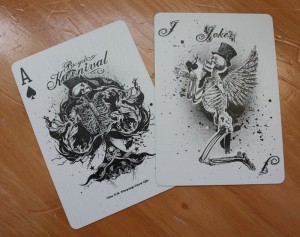 Compared to all the custom faces you see on so many new decks these days, you may think this is rather under-stated.  But more positively, if you are actually using these for performing, they are much easier to read and much less ‘suspicious’ for spectators than all the custom stuff.

Other unusual points to note are the absence of a deck seal and the inclusion of a useful blank card to match the deck (plus the obligatory advertising card).  There is a nice subtle card reveal on the Joker (as pictured above) and also a barcode reveal on the tuck case.

The cards feel just ever so slightly thin to me – so I don’t know if USPCC used a different stock.  But as ever the air-flow finish makes fans and spreads and the like very easy.  This is likely to become quite collectable since the print run is only 4000.  So head on over and buy one now before they run out.

(PS watch this space for a chance to win one in our summer competition!)