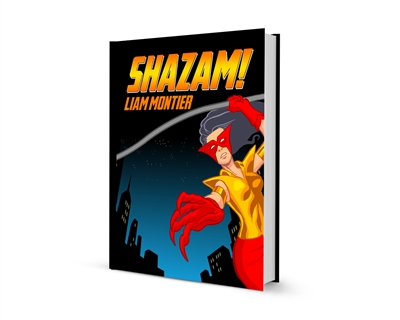 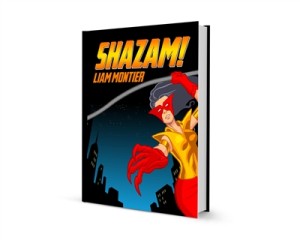 Liam Montier and I are a dying breed in that we still treasure magic books over the more common DVDs and downloads. So the only thing that would have made me happier than receiving Liam’s new ebook in my inbox was if he had sent me a hard copy (hint hint – Liam – are you going to put all these ebooks together one day and bind them nicely?!). Shazam is a collection of 12 new effects from this man’s inventive mind. Let’s walk you through them…

Is a nice little opener for a 4 ace routine. In it the spectator cuts to the Ace of Spades, which repeatedly jumps to the top of further packets the spectator has cut, and then all the other aces are discovered on the top of the piles. This is a pleasing little routine which makes a change from just going straight in to a 4 ace effect. The main move required is clearly explained and illustrated (though a few other moves – like getting breaks etc. aren’t described). If I had a criticism it is that you use the same procedure 3 times on the trot (although to be fair he does suggest, though not explain a different move which could be used last time).

After a ‘twisting the aces’ type sequence two of the aces swap places with two selections which have been put aside later. This is a good example of something Liam does very well – combining bits of different routines to produce a pleasing overall effect. There’s a lot of magic in this one and it requires only moderate card handling skills (and could be done impromptu). Nice.

This is an ace assembly type effect combined with the idea of an invisible palm routine. It is well constructed – building nicely to its climax – but is one of the more technically demanding routines in the booklet.

This is a sort of thought of cards across routine – where only a single chosen card travels. It disappears from a group of cards in the card box and reappears between two face up jokers in the main deck – appearing there before the thought of card has actually been named. There are some lovely subtleties in the way this has been put together. Although it requires a little memory work and some intermediate card-handling the strength of the effect is out of proportion to its difficulty.

This is a nice little twist on the classic ‘cannibal cards’ plot. 3 cards are ‘eaten’ by the four Kings, and then the Kings turn into 10s at the unexpected conclusion. This is not too movey and can be done more or less impromptu. From a non-magical point of view, this one would have benefited from some slightly more careful editing – since the instructions/patter suggestions overlap a little.

This is a variation on an Aldo Columbini routine. The spectator chooses a card, then you offer to find it with the help of the four Jacks. These turn into Jokers one at a time, and then into the three aces – which match the spectator’s initial selection. There are a number of different counts and displayed used here, but all are clearly explained. It assumes you know how to force a card. But you do, don’t you?!

This is a sandwich effect where both the ‘bread’ and the ‘filling’ are isolated in separate sections of the pack – but still come together to make that sandwich! I can’t quite make my mind up on this one. Liam suggests it might fit as part of a longer routine but I’m just not sure it does much for me. The separation of the elements of the sandwich ought to make this effect more impressive, but for my money I think something of the simplicity of many alternatives is lost in this handling.

A kind of ‘reverse collectors’ effect – three chosen cards, sandwiched between 4 of a kind, vanish and return to the deck face up and spread throughout the pack. Requiring only basic sleight of hand and a bit of careful choreography this is a direct (if not earth-shattering) little effect.

I don’t know the original Bob King effect (Rematch) on which this is based, but the effect, briefly, is as follows. 2 sets of cards are removed from a (can be borrowed) deck – 4 red, 4 black and a joker with each packet. These are mixed up in a spelling procedure where the spectator makes the choices, and surprisingly a pair of jokers turns up. As an extra kicker the other pairs of cards now match (even though originally there were no other matching pairs at all).

In this effect the spectator deals cards based on their birthday and then creates a playing card based on two cards dealt to. You have predicted the card, and have also discovered their birthday along the way (without them telling you) providing an additional kicker to the prediction.

This is Liam’s take on an Alex Elmsley plot. All the cards of one suit are mixed according to the spectator’s instructions, then they choose one of them and a joker is waved over the packet. In a flash, the cards sort themselves into the right order and a card is seen to be reversed in the centre of the spread. This turns out to be the joker and the original selection is now in your hand! It’s a neat little effect which is probably harder to explain than to do. Worth a look.

This is a really nice variation on John Scarne’s stapled card. There are some clever subtleties in the routine which you could incorporate into other ideas even if you don’t use the routine. In brief, a pair of jokers which have been stapled together locate a selected card which then swaps places with one of the jokers and ends up stabled to the other one – everything is clean at the end. This requires some preparation but the very strong effect more than makes up for that!

There’s lots to like about this ebook. Credits are always clearly given and it is well illustrated throughout. Explanations are clear – and patter is even suggested – though to be honest it may well suit Liam’s style but not mine at all! It felt to me like a couple of the effects were ‘filler’ – but there’s still lots of good magic here. The only thing I would have liked to see is a fully hyperlinked index to the book so it is easier to navigate.

Available direct from TrickTastic.com (who kindly provided the review copy) – and currently on sale making it even better value at £8 (instead of £10).

You can get a taste of the contents in this video: