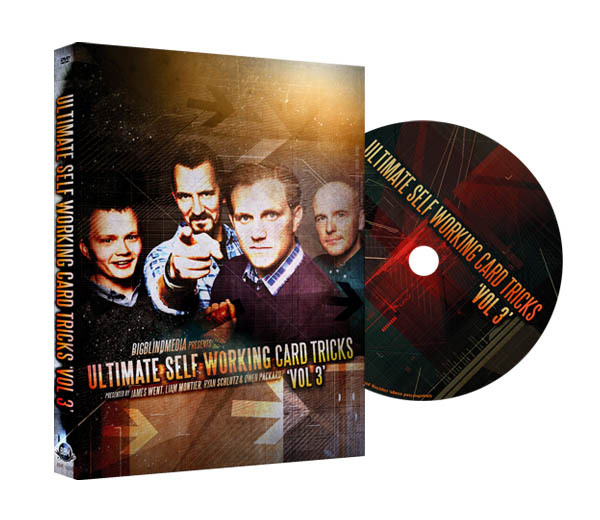 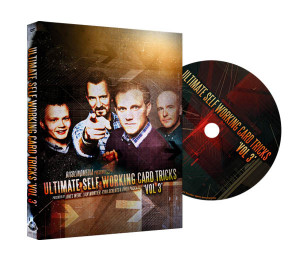 So there’s an ongoing debate about the use of the word ‘ultimate’ in the title of something with more than one volume. Is it the ultimate or are they amongst the ultimate? But ultimately, who cares – this is nit-picking and if I’m honest I’ve been impressed by the consistently high standard of the magic on these 3 volumes (you can read our reviews of volume 1 and volume 2). The line-up of creators on volume 3 is enough to make any magician salivate. But let’s get straight on to the tricks…

I recently picked up a copy of Caleb’s High Spots book so was pleased to see first item on disk was his. Spectator freely cuts to a card in the deck then shuffles their cards (and puts the rest of the deck out of sight in the card box). You then successfully read your spectator’s mind and reveal their card. Some set up required but a really sneaky method which you will love to perform.

It’s quite rare for me to be completely fooled by a magic trick – but I didn’t have a clue what was going on here. Encouragingly neither, apparently, did James Went or Liam Montier when they explained it! There is a mathematical principle at work but it is not as ‘procedural’ as this kind of effect sometimes is. It looks very fair and is a real fooler.

This is a really visual rising card effect which pretty much works itself. It looks great and is very easy to work. As Liam comments on the introduction, it is rare for a self-worker to be so visually impressive. You have to try this one out.

A pseudo-memorised deck routine – nicely constructed with three phases. I feel like Ryan Schultz overplays this in performance but it is a great effect. There is a set up required, but it would (as its name implies) make a great opener because of that.

Solomon’s twist on the classic ‘Clock Trick’ (you can find it in The Wisdom of Solomon) with a slight gambling theme. It brings it out of the ‘puzzle’ category and gives it a bit more justification. If you can deal cards you can do this one and there’s a nice (and very cheeky!) extra ‘prediction’ which makes the effect even stronger.

A brilliant example of Trost’s cunning – the spectator has a very free selection and yet manages to locate 3 cards which form a set with your prediction set down earlier. You can work it from a borrowed shuffled deck. Love it. (Well worth checking out his books if you like this).

This is a really clever routine where a chosen card swaps places with a joker and ends up stapled to another joker. There’s a lot of magic going on here – far more than seems possible for a self-worker. We liked it last week when we read it in Liam’s Shazam and it is still good!

This really does look completely fair – the spectator seems to make all the decisions to choose and lose a card (with a borrowed and shuffled deck) and you can still locate it. Uses a principle you probably read about in your first magic book, but so well disguised this is a genuine killer! This goes straight in to my impromptu set.

A classic from Jennings 67 – this is almost entirely hands off, and yet you manage to locate a card selected by the spectator from a borrowed shuffled deck. It shares many of the strengths of Devestation, but feels slightly more procedural to me.

The Red and The Blue – Alex Elmsley

In this clever effect from Alex Elmsley a card chosen by you and the spectator swap places by magic – or rather the decks containing them do! And the set up is accomplished by performing the venerable ‘Do as I do’ effect. Not only does the ‘Do as I do’ set you up it creates a routine which builds together nicely.

It is hard to make absolute comparisons, but I felt the material on here was slightly stronger than the material in volume 2. There are some cracking effects which require nothing in the way of sleight of hand allowing you to concentrate on the presentation. As the quote from the legendary Dai Vernon (which appears on the cover) says: “In magic, today as always, the effect is what counts. The methods used are always purely secondary.” Well you get some GREAT effects which require very little technical effort. If you’ve got an ounce of performing skill you will be getting some brilliant reactions from this material.

Highly recommended and available from MagicShop.co.uk (with thanks to BBM who kindly supplied our review copy).

And as our summer competition we’re offering you the chance to win all 3 volumes of the Ultimate Self-Working Card Tricks series – so what are you waiting for?