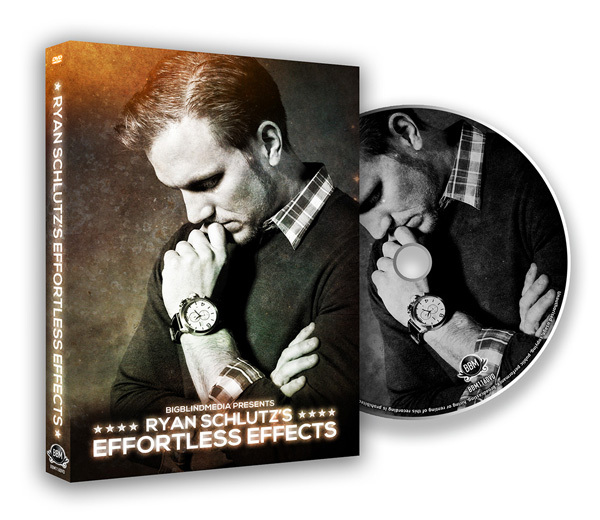 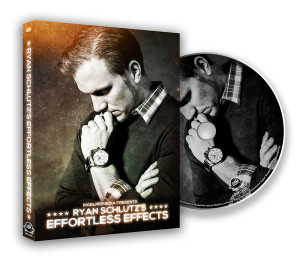 A year or two ago I had never heard of Ryan Shlutz, but thanks to his debut DVD Miracles Without Moves and contributions to USWCT3 I was eager to get watching Effortless Effects when it dropped through the door. Let’s talk about the tricks…

A card the spectator merely peeks at (from a shuffled deck) disappears (becomes ‘invisible’!) and then instantly reappears face-up in the middle of the deck! This is a real fooler and a nice whimsical plot idea. There’s a virtually self-working version and also a slightly more ‘technical’ version if you want to fry magicians too. A great start to the DVD!

The spectator ‘merely thinks’ of a card, and it appears amongst a packet of aces held by the spectator. As seems to be the case with a few of the routines – it requires more boldness than moves (though there is a more advanced handling provided too). Another worker from my point of view.

A slightly zany lie-detector type effect where you (of course) locate the spectator’s card from a shuffled deck. Some really sneaky thinking here which you could easily apply to other effects.

The magician makes a mistake in trying to locate the spectator’s freely chosen card just by looking into their eyes. All this is magically righted as their card appears in the packet in their hand instantaneously.

The spectator makes up a card in their mind, which then disappears from the deck and is discovered already predicted. Easy to do and packs a punch. Shares some similarities with a Mark Elsdon effect (But Not Here) but is different in plot and method.

To a plot based on ‘poker tells’ you fish to read the spectator’s mind. For me, this is the weakest effect on the disk and the presentation is a bit drawn out. More positively it makes a nice change from the pick a card type routine, and is a really ‘lateral’ use of a standard move, but this just doesn’t do it for me.

This uses a borrowed, shuffled deck, and you can locate a card merely thought of by the spectator. Looks super clean and fair and needs no preparation. This could well become the ‘go to’ impromptu effect when you’re asked to show someone a trick. Nice!

The Gap Principle is Ryan’s name for a key part of the method in a number of the effects on this disk. In an extra section this principle is explored in conversation with Liam Montier. It’s super sneaky and allows for a really fair looking control of a freely chosen card. Once you’ve got your head round this you will see the principle has a lot of applications in your own effects.

A new feature on this DVD (well it’s the first time I’ve seen it) is the Bullet explanation – essentially a stripped down explanation of the effect. This is useful if perhaps you’ve gone back to the DVD and just want a reminder of the details of the routine without all the talking that goes on in the detailed explanation. I can see this becoming a regular feature.

In other notes, this is the first time I’ve laughed out loud at a credits section. You’ll just have to see for yourself because I’m not spoiling it for you!

All in all this is another strong DVD from BBM – I can see everything in here playing well in the real world and with a decent presentation really doing the job.
Effortless Effects is available from Merchant of Magic (with thanks to BBM (who kindly provided the review copy).