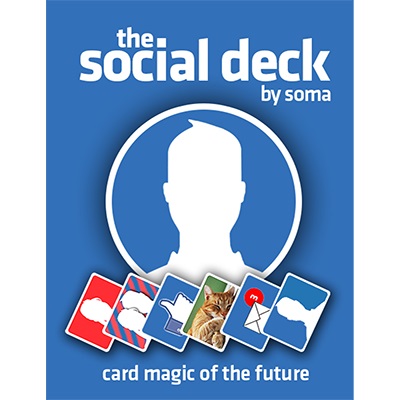 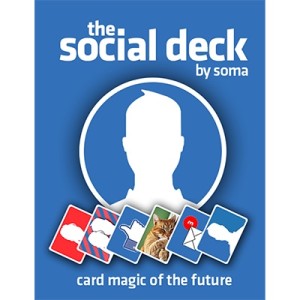 Soma – World Champion of stage magic turns his hand to close up with a specially produced deck of cards around the ubiquitous phenomenon of social media. In his introduction he says it is a new era of card magic – which is a bold claim. So let’s have a look at what you get and what you can do with it…

It’s clear that a good deal of care and thought has gone into the production of this set. The cards are of good quality – printed by USPCC. There is a nicely printed ‘cheat sheet’ which reminds you of the setup for the various effects taught on the DVD, and each set comes with a registration code to allow you to watch the material in HD online and to access some extra effects and resources. The DVD is clear and easy to navigate. Explanation is steady and clear (never laboured) in an unobtrusive setting.

What about the effects?

One Team – four profile pictures travel to a single card. Short and sweet.
Couples – a bit like the first routine, but forming a boy/girl couple card. I didn’t like the patter line (‘hitting’ on someone) but a nice and visual effect.
Friend Request – a strong routine where the spectator shuffles the cards and then stops you as you deal through them. Two previously tabled cards predict the number of ‘friends’ and the gender split. Nice.
Gallery – a series of effects around the theme of gallery pictures – which appear, change and duplicate.
One in eight – this is a simple but effect routine where the spectator manages to choose the only odd card out from a circle of 8 cards.
Birthday Message – social commentary in a card trick? To a story about receiving presents on your birthday, 4 presents disappear and the last one turns into a Facebook message. I normally like ‘story’ based effects but this felt a little too contrived for me.
Social Graphics – a randomly chosen ‘profile picture card’ changes colour, then gets increasingly smudged and finally turns into a prediction revealing how many cards were dealt at the start of the routine. A well thought out routine – though my favourite bit was the way Soma says ‘smudged’…
Boys and Girls – an ‘oil and water’ routine with a more engaging patter routine than normal! This is a really nice 3 phase routine (with phases by Joshua Jay, Soma himself and Ray Kosby) – where the spectator actually helps with the final mix. I haven’t made a close study of oil and water effects, but I really liked this routine.
Houdini 1-2-3-4 – a sort of ambitious card routine with Harry Houdini’s ‘profile picture’. There are some really nice ideas here, but I wonder if the plot line is of more interest to magicians than to lay people. But some clever combining of a variety of tricks into a coherent theme.
Social Money – a blank card chosen by the spectator becomes printed with a half dollar coin – which then materialises into the real thing.
Metal to ink – almost the reverse of the above – a half dollar disappears, printing itself on a blank card in the process.
Online Dating – after a ‘random selection’ process the only ‘couple’ card is found out of a selection of single men and women. I thought this was the weakest effect on the disk.

There is some discussion of setting up the deck so you can perform a series of routines on the trot and also thoughts on a couple of extra special cards that are supplied. Soma recommends not performing more than 4 or 5 effects on the trot – for me it would be more like 2 or 3 – but the discussion is helpful.
The extra content online is useful – it allows you to access the original routines anywhere and also explains a few more tricks. Some of these are quite strong, but also require a second Social Deck. I think this is a really helpful addition to the DVD and would like to see more dealers adopting this kind of approach.

Elementary sleight of hand needed for most of the effects – for which there is minimal explanation. I don’t think this would be a problem unless you’re a complete beginner (DL, break, double undercut, top change). Some do require slightly more advanced handling (palming, olour change etc) and the same proviso applies – they’re explained but only very briefly.

As you would expect, these are not radically ‘new’ tricks – you’ll be familiar with some of the plots and methods – but they are nicely worked out with the social media theme – and many more possibilities are there if you get thinking. I don’t think this is a new era in card magic. But social media looks like it’s here to stay, and so, I think is the Social Deck.

The Social Deck is available from all good magic shops – it’s £29.50 at MagicShop.co.uk

(Many thanks to Soma who supplied our review copy – he is also the man behind this AMAZING VIDEO which we posted some years ago – music with Bicycle Cards.)