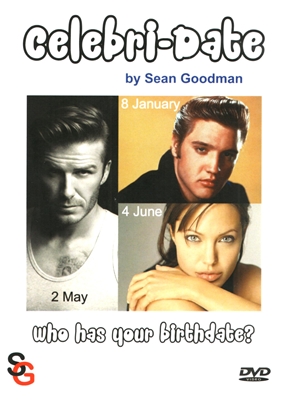 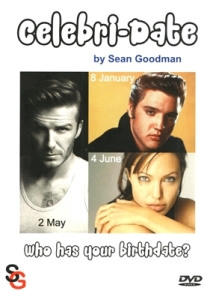 There’s a little bit of me that’s particularly chuffed to publish this CelebriDate review on 19th September. But you’ll have to read to the end to find out why…

I had the pleasure of meeting Sean Goodman at our visit to Davenports Magic Kingdom this summer. He’s a softly-spoken and engaging entertainer and we’ve enjoyed his previous releases (Genetics, TickTock and Star Struck) – so we were looking forward to the chance to review CelebriDate.

What’s the effect? It’s a little misleading to describe the effect, since a number of possible presentations are possible. The one we’re most likely to use would look a bit like this: you hand out a diary which is filled with the birthdays of 366 celebrities; a spectator then writes down a special date on a business card; another spectator freely selects a card from a deck of cards; this card reminds you of a famous person which, of course, turns out to be the one at the date selected by the spectator.

The common theme in Sean’s work is simplicity – he always takes the simplest route to the outcome he is looking for. If you’re the sort of magician who is only excited by the latest and greatest new-fangled method then this won’t excite you at all. But if you remember the first rule of magic – that it’s the effect (on the spectator) not the method that matters you will want to look at this.

You are provided with a nicely printed (unfeked) paperback diary. My review copy arrived with a slightly battered corner – and my impression is that if you’re using it a lot then you will probably have to replace it before too long – but it looks convincing enough. There are a good variety of different kinds of ‘celebrities’ in there – from historical figures like Rembrandt to current actors and sports stars.

The DVD explains the ‘structure’ of the routine and then outlines a number of different methods for each part. There are pros and cons to the different routines suggested – the one I have described is the one that works best for me, but you might prefer a different one. Sean explains everything clearly with all the detail necessary.

It is quite difficult to review this kind of mental magic since often the ‘baldness’ of the method can sometimes makes it hard to imagine the effect on the audience (and I haven’t had a chance to road test this yet). However, my suspicion is that the structure of the routine will sufficiently obscure the method, and the use of someone’s birthday will automatically create an emotional hook/interest – so this really ought to get some good reactions. You could even combine it with StarStruck to make a really pleasing routine.

I already perform a ‘traditional’ (i.e. playing card based) diary trick, but I can see lots of advantages to the celebrity theme – especially with a younger or family audience. Well worth a punt at £23.99 (at the time of writing). Available from MagicShop.co.uk.

PS in case you are wondering, 19th September is Sean’s birthday! And no, I’m not some kind of obsessive stalker – but he does mention that more than once on the DVD. Happy Birthday Sean!