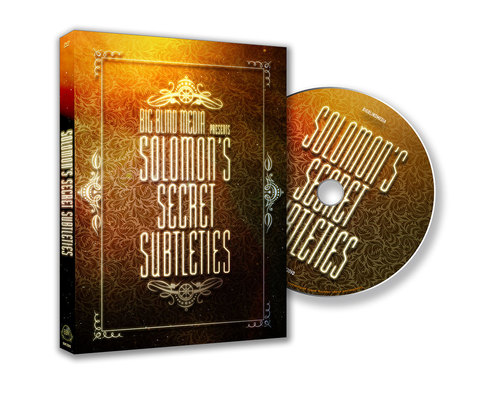 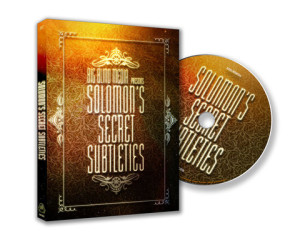 It’s been quite a while since David Solomon has put out a new DVD – we looked at the epic Card Solutions of Solomon back in 2011. So we were looking forward to seeing his newest offering. We’ll dive straight in to the tricks and then make some more general comments at the end.

A beautifully clean looking effect where the spectator cuts the pack into four piles, the top card of each pile is an indicator, and the card at each position matches – the four kings – as an extra kicker, the bottom of each pile shows the four aces. All but self-working – and a real killer.

A whimsical little effect where an Ace and Jack of spades swap places twice and then leap to the middle of the deck.

The spectator’s chosen card vanishes from a set of four random selections – and reappears at the position you reach when you add up the values of the other three cards. That sounds confusing but is quite magical. Slightly less direct in method and effect than some of the other items on the disk and does require some slightly more advanced technique.

A card selected by the spectator is located in a process of ‘folding up’ a blanket made of face up and face down cards. If that sounds weird, it is! But it is a fooling effect – not least because you probably won’t understand how it works even if you know how it works! And as an added bonus you can work from a shuffled deck.

This is a really nice slow motion transposition of 4 red and 4 black cards followed up by an instantaneous repeat of the same. I think this is a beautifully crafted routine loaded with plenty of magic. You can pretty much set it up on the fly so it could well be entering the impromptu collection…

A follow the leader type effect using a magnetism theme. Very easy to do – and the one simple move leaves you so far ahead you won’t believe it.

A twisting the aces type routine with a royal flush finish. A neat routine with plenty of surprises – and surprisingly economical in construction.

Another variation on the clock trick with a blank card surprise at the end. This did little for me, and by its nature is quite procedural (and requires a set up). That being said, it has a few nice subtleties which make it seem fairer than many alternatives. Not one of the strongest items on the disk.

A very clever variation on Simon Aronson’s classic effect. A freely shuffled and cut deck is mixed up face up and face down. The spectator freely chooses a number – and that number of cards are found to be face up. Requires a bit of maths/thinking on your feet – but a very impressive effect if you can nail it.

A quirky little spelling effect – where the spectator spells to their own freely chosen card. Some memory work required and a slightly unclear explanation here.

This is a really nice 4 ace trick where the aces travel from packet to packet rather than all in one go. This requires some moves – but there isn’t much heat on most of them, and so it should be within reach of most intermediate card magicians. Nicely routined.

From a freely shuffled deck the magician makes two predictions which then match two cards the spectator freely cuts too. The use of a gimmicked card (supplied – but you’ve almost certainly got one) makes for a clean handling, but for me the impact of the effect isn’t much greater than the classic Gemini Twins – in fact in many ways the handling appears clunkier. And the use of a gaff card means it’s not genuinely ‘anytime’ unlike the Gemini effect.

A novel routine based on a Peter Duffie idea. The Jacks repeatedly jump to the top of a pile of Aces and then at the end of the trick the Aces turn into royal flush. In spite of the slightly curious name (which is explained!) this is a really nice effect with a lot of magic and an unexpected climax.

A card is selected and returned to the deck then a small packet of cards is mixed by the spectator and dealt into four piles. The four piles reveal the identity of the chosen card and then their combined value reveals the chosen card’s location in the balance of the deck. Another whimsical little plot with an extra surprise at the end. Quite a bit of set up but not too difficult to do.

We’ve spoken before of Solomon as a creator rather than a performer and I have a sneaking suspicion that watching some of these effects live with a better performer would give them some zing. I’m aware that the way you respond to a performer is very individual – so I can only speak from my own perspective here.

One of the things I love about Solomon is his evident joy and enthusiasm in the method and construction of the effect – here is an enthusiast at work – and I enjoyed some of the stories he told on the way. Less positively his explanations are not the clearest I’ve ever seen on a DVD. Liam does a valiant job of trying to ask helpful questions to make things clearer where Solomon has rushed over something (and a few subtitles are added for the same reason) – but compared to the general quality of teaching on BBM disks this is a little disappointing.

One nice extra feature which I don’t recall seeing on any other DVDs is a separate menu item for ‘setup’ – so you can see the setup for the trick without having to watch the explanation again. This is a useful feature – but also points to the fact that many of the effects do require quite complicated setups.

I would love Owen to explain the thinking behind the somewhat quirky titles/menus – and in particular why they feature a slightly out of focus floating table lamp!

So all in all we’re blowing a bit hot and cold on this one. There are a couple of effects which we will definitely pursue, and several which (in performance) may yield reactions strong enough to justify the setup required. Solomon will never be my favourite performer, but you will learn a lot about constructing a routine from his work.

Available direct from MoM (with thanks to BBM who kindly supplied a review copy) £19.99 (at time of writing).