Out of sight out of your mind – review 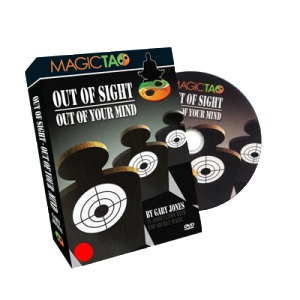 Out of sight (for the sake of brevity I’m not going to use its full title every time!) is a great new release from Gary Jones and put out by MagicTao. The effect is both simple and striking. Two spectators simply think of a card from the pack and you are able to deal down to it without them saying anything! It really is that direct.

The method relies on boldness rather than sleight of hand – which means it should be within the reach of all. But you will need a little confidence to do this the first time. However, the reactions should more than re-assure you that it is worth the risk.

You are supplied with a special deck – which is based on another deck you may already be familiar with (everything is credited on the DVD but I don’t want to say more here for risk of exposure). It comes in Bicycle stock – though you could make it up in any stock you wanted.

The effect is all but self-working. You need a little bit of basic card handling but there is no real memory work or sleight of hand. It re-sets almost instantly – so is ideal for walkaround – the only downside is that the deck can’t really be used for anything else. But for me, the strength of the effect means this is worth the pocket-space.

The teaching DVD is clear and includes a live performance and some studio performances. There are variations for using one or two spectators – and a few alternative options if you are less confident in performing – but I personally think the original two-spectator handling is the strongest. The DVD explains everything you need to know – down to how to fan a deck (!) and a few ideas in case you get it wrong.

I’m not sure that there is much more to say – except I can’t wait to get using this in the real world. You’re not getting an ingenious new principle – but you are getting a well thought through and powerful routine which you should be able to perform fairly quickly. This comes highly recommended and certainly won’t end up at the back of your magic cupboard out of sight and out of your mind!

Available direct from Merchant of Magic for £22.99 (at time of writing)

(Thanks to MagicTao for kindly providing the review copy)

Gary Jonesout of sight out of your mind