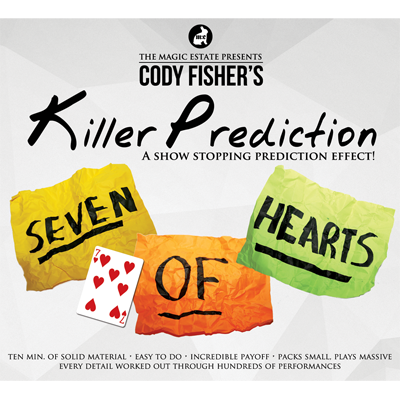 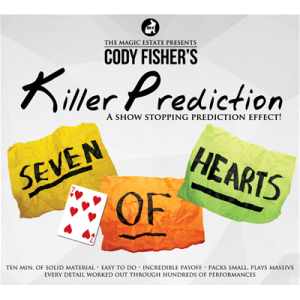 Killer Prediction is a really interesting take on a very well known card effect. I don’t think anyone is going to complain about exposure if I say that the routine depends on the use of an Invisible Deck – a relatively low-cost item which you probably already own (but you will have to buy if you don’t already have one).

The genius of this routine is that it makes the ID entirely suitable for a platform performance and adds a brilliant kicker ending where some paper balls which have been used to select audience members are unfolded to reveal the name of the freely constructed card written on the sheets before the trick even began.

I am completely sold out on the important magic truism that effect is everything, method is (almost) nothing. And if you’re performing in the real-world for real people you will know this to be the case. Which is one of the things which makes reviewing quite challenging because magicians sometimes take a different view.

But either way, the effect that the audience is left with seems to me extremely strong – and the clever construction of the routine flew past me when I watched it the first time. Cody goes into a lot of detail about why he does things the way he does and so there is much to learn from the DVD. You won’t find any radically new principles here, but there’s some clever thinking and wording going on which adds much to the overall strength of the effect.

On the downside, in addition to the necessary deck (which isn’t supplied – only an instructional DVD), you will also need to make a modest investment to make up the rest of the necessary. But this is a very modest additional expense – and for the overall value of the routine seems to me very worthwhile.

Teaching is clear and detailed, and it is nice to see a live performance included – which always gets a thumbs up from me. He explains a variation using the Brainwave Deck instead of the ID, but for my money I would probably stick to the ID version.

A small excursus on Invisible Decks

On the subject of IDs, I will share my own experience. In spite of our name, I have found Bicycle Invisible Decks to sometimes be a little bit too ‘slippy’ which makes it harder for me to use, so for many years I have favoured the Royal Magic (non Bicycle) version which had a bit more ‘stick’. But I’ve just got my hands on a Card Shark version in a Pheonix Deck and this is my favourite version to date – and will become my regular deck. It has the added advantage that it is made in their ‘Parlour’ size which makes it more visible in a stage setting than a standard Poker deck. End of diversion.

All in all, I like this a lot. Although I don’t do as many platform shows I can see me making this up and adding it to the set, since you get a good amount of magic for a modest investment. It is not difficult to do, so will leave you plenty of time to work on your performance. Which is just the way I like it.
Available from Merchant of Magic for only £31.99 at time of writing.