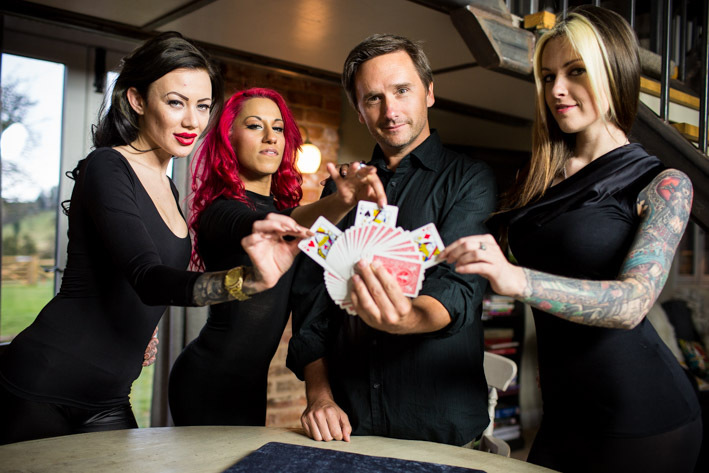 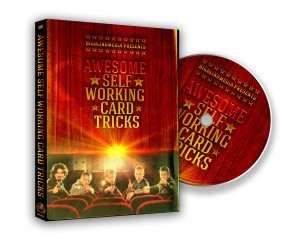 BBM are building quite a name for themselves in the self-working/easy to do magic range – and we always look forward to their new releases. Having gone through Ultimate Self-Working Card Tricks Vol 1, Vol 2 and Vol 3 their latest release is the more modestly titled Awesome Self Working Card Tricks – here’s our review…

We’ll jump straight into the tricks first of all before making some more general comments.

Your thoughts are mine – John Carey
You reveal a spectator’s thought of card which then magically turns face up in the deck and turns out to be from a different pack. There are some nice touches here but for me it was one of the less striking effects on the disk – which makes it a shame that it is most likely the first one you’ll see.

Compatability – Wayne Dobson
Here’s a clever effect with a nice premise – testing your compatibility with the spectator. Despite an incredibly fair looking procedure you and the spectator end up having signed the same card without knowing it. Can be done with a borrowed shuffled deck. There’s a little bit of mental maths to do – but with a bit of practise you’ll be baffling your audiences.

Wayne Man – Wayne Dobson
This is a fantastic pseudo-memorised deck presentation which is incredibly easy to do – but if you can sell it you will absolutely knock their socks off. I love the simplicity of this and directness – and it can be done with a borrowed shuffled deck. This probably won’t fool magicians but is a brilliant application of an under-used principle.

Future Deck – Jack Vosburgh
From a classic book (Scarne on Card Tricks) this is an effective prediction trick where a freely chosen card matches one you previously set aside in the card box. It requires a bit of set up (and will be a one trick deck) but all this preparation makes it incredibly easy to do.

Automatic Ace Triumph – Kuniyasu Fujiwara
This is an unusual effect (originally published in the well named Japanese Ingenious) in which having mixed the aces up in amongst a larger packet of cards, some face up and some face down, in the fairest possible way the cards instantly right themselves leaving only the Aces face up. Now I know how it works, I still don’t know how it works! It’s a little bit ‘procedural’ but in the right context it could work. You’ve got to try it out!

Emotional Reaction – Dai Vernon
A subtle little routine, as you’d expect from Vernon, using a very well known technique but in a very well hidden way. This enables you to locate a card the spectator has peeked and lost in the fairest (looking!) possible way. Reveal it in your favourite way. Again this can be done with a borrowed and shuffled deck.

Power of Thought – Paul Curry
This is a very powerful coincidence effect with two decks of cards. The spectator thinks of a card from the first deck – and it turns out to be the only one which matches with the second deck as they are dealt out together. This fooled me first time – which is quite rare – and the method is so simple yet devious you’ll love it. Some set up required but re-sets quite easily for subsequent performances. (Paul Curry is clearly a genius – if you liked this, check out Worlds Beyond, the book it comes from – full of more Curry magic)

What a Turn Up – Kaymar Magic
A small packet ‘do as I do’ – where you and the spectator both turn over a single card in a packet behind your back and they are found to match. Not a massive puzzler – but easy to do and a nice kicker at the end when all the other cards are seen to be jokers. It has the benefit of slipping in your pocket or wallet when you need a no-pressure trick to perform.

Route 1 – Dave Forrest
This is a very clever and fair looking ACAAN effect utilising two decks of cards. I love the sneaky and subtle method here – a great example of Dave Forrest’s lateral thinking. You will need to do a bit of work to set this up but it is well worth the effort. A few variations are suggested too.

Double Salto – William B Gibson
You and the spectator have half the deck each, then each choose a card and return it in the other person’s half. In an instant both cards reverse themselves in the re-assembled deck. Super simple to do – but with a strong impact on your spectator. You can do this any time with a one second setup. This is a classic effect.

Further than that – Stewart James
You read the spectator’s mind, spell to their card, produce the aces and a straight royal flush. Quite a lot of magic for almost no effort! There’s a setup (of course) but otherwise self-working – though a false cut or shuffle will significantly improve the impact of this. A great little trick. 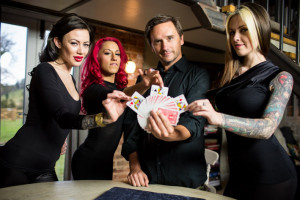 So is it really awesome?

Yes – I think it is. The list of contributors alone should be enough to tell you that! The DVD is as usual very well produced. It has been shot in a variety of locations with a range of performers and the usual good-looking ladies to assist! Explanations are all clear and concise and for the most part the effects really are self working – in the sense of requiring no sleight of hand.

I keep wondering when they will run out of material for these kinds of disks, but I have to say that this feels like one of the strongest releases yet. They seem to have plumbed a few of the more classic routines which many newer magicians may have missed and made them more accessible by making a DVD of them. So I’m highly impressed by the collection – although one or two effects feel less strong I could see me using almost all of them in the right setting.

Highly recommended – and available direct from Merchant of Magic – £23.99