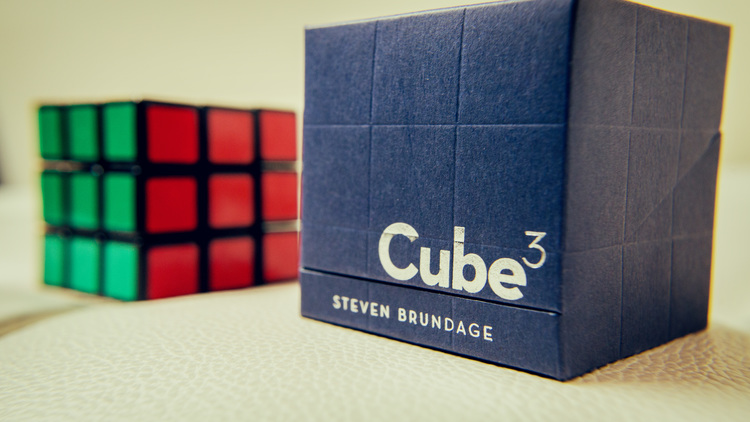 I’ve always had a fascination with the cube – which might tell you something about the way my mind works. I once went to an 80s party dressed up as a giant one. But I’m not going to show you the photos. There have been lots of great effects released over the years using the cube but I think Cube 3 is in a slightly different category as I will try to explain in this review. 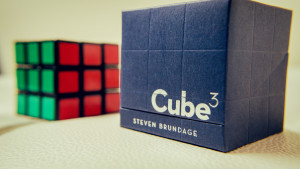 First thing’s first, the packaging is amazing! The cube comes in a really nicely produced box which also includes a really cute USB drive which contains all the tuition. Top marks for presentation – these things are only details but it shouts straight away that this is a quality product.

The cube itself is not your regular cube that you buy in the toy shop – this is a special ‘speed cube’ designed to move freely and quickly. Which it does. Though in my case not as silently as the instructions promised.

Steve Brundage is a real enthusiast which comes across and makes him a very easy person to listen to. And his teaching is first rate. The pace is good, everything is clearly and carefully explained. Things are repeated when they need to be. This is high quality teaching and is all shot very nicely.

I also really appreciated the honesty from the outset. Because here’s the thing – you are going to actually learn how to solve the Rubik’s Cube. This isn’t a gaff cube, and whilst there’s some clever routining going on, you are essentially solving the cube! But Steve is clear straight away, you’re not going to crack this in 20 mins.

But don’t let that put you off – because I think you’ll be surprised how quickly you will get the hang of it. If you devoted a whole afternoon to this, I reckon you would be a decent way towards having learnt the basic solve.

The USB stick contains 2 MP4 files which you can watch on any computer. The first one teaches how to solve the cube. It’s around 1 ½ hours long and the first 45 minutes or so goes through the solve, breaking it down into easy phases. There is then roughly the same amount of time going through worked examples – slowly explained and then shown at greater speed. This is very thorough, and I was pleasantly surprised by the difficulty level. True, you will need to put in some work to get this fluent, but the teaching is good and clear.

The second video contains the routines. It starts with 20 minutes or so explaining some of Steve’s own history with the cube, and some of the basic moves (and things like how to hold the cube) – then the rest teaches the routines.

6 routines are taught – though several of them are variants on each other. First comes the Bag solve – which does what it says on the tin. A mixed up cube goes into a paper bag and comes out solved.

Next is probably my favourite – the Imagination solve – this is like a slow motion solve of the cube which appears to happen without any moves as you simply rotate the cube in your hand.

Then the Toss up solve – which again does what it says on the tin. This is followed by the similar but different Behind the back toss up solve – if your catching is anything like mine, that will need work on first!

There are two more solves, first the Slow motion solve – which is a bit of a misnomer since the actual solve happens quite quickly. Then, to my mind the weakest routine on the disk, the Color change solve – where one face slowly solves itself as squares ‘change colour’ as you pass your hand over them. Very angly this one.

The video continues with presentation ideas (from motivational speaking to trade shows), cube facts (some of which you could incorporate into you routine) and thoughts on Speed Solving the cube – a competitive art in its own right. He then covers Cube Maintenance – tuning, mending, storing, you name it and even a short section on flourishes.

This is a comprehensive tool kit for anyone with an interest in the cube – and the routines themselves are very visual and impressive. The visual nature of the effects and ubiquity of the cube means you could even perform this in a country where you couldn’t speak the language to great effect. And you can pretty much set up for the effects in front of the spectator – as you talk to them whilst you mix up the cube.

I really like this. It is massively comprehensive, some of the best teaching I’ve seen and the effects are brilliant. There is, of course, a payoff – and you will have to invest a serious chunk of time to get these good. But I think it will be time well spent – and it will probably make you stand out from the crowd – and all those other people who can’t be bothered to make the effort. And because it uses a real cube everything can be examined without any worries. Wonderful.

If I was being really critical I have two minor niggles. Firstly, the fact that you get an mp4 file rather than a DVD means there is no way to jump to particular sections of the teaching. It meant I resorted to scribbling down the timings for where each section began – something I would recommend doing at the first viewing if you’re likely to want to do that. And unless you’re already a cube ninja I suspect you will. The USB stick is an elegant, and I imagine cost-effective way of distributing the routines, but does have that downside. Secondly, there are some really helpful pdf crib sheets for solving the cube. I would have loved to see a similar crib sheet for the routines – setting out the order of the necessary moves. That would have been really helpful for me in practise.

But these are tiny niggles, and so if you think you have the time/attitude to learn this it comes highly recommended. You can get it direct from MagicShop.co.uk for £26.99 (at the time of writing).

And to whet your appetite, why not enjoy this footage of Steve fooling Penn and Teller with some of the routines on this very set.