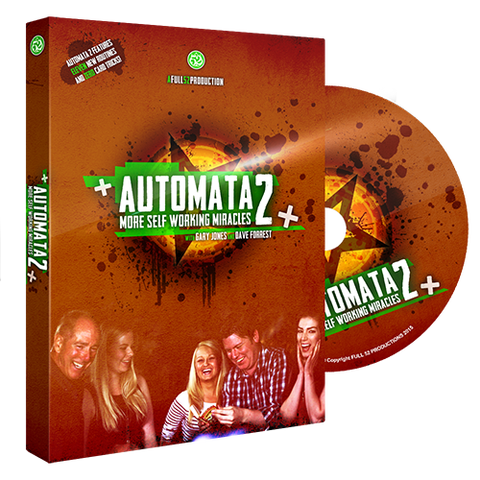 Automata was a BRILLIANT release. One of the stand out items of 2014. So we were really excited to review Automata 2 – another whole disk of largely self-working non-card based miracles. So let’s dive straight in with the tricks… 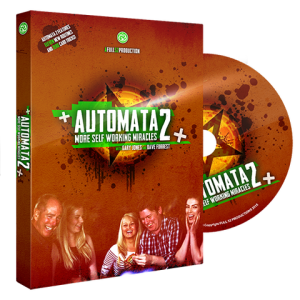 An impossibly clean looking escape of a borrowed finger ring from a knotted loop of dental floss trapped in a cup of water. A slightly bizarre premise – but a really clever idea which looks like real magic. Ends clean and examinable – entirely self working. The tiny downers are the need for a little bit of pre-preparation and a cup of water in your performing area – but I can see many contexts where this would be a real worker.

This is Dave’s take on a self-working book test using (though not limited to) a book of quotations. In order to make this self-working there is a slightly drawn out (see how I’m resisting the use of the word contrived) process for selecting the page. I don’t think this is an inherent drawback – but does require some personality/presentational ability to carry it through. Dave has this in spades which makes it an entertaining routine – and as the reaction of his spectator shows. There are also a number of levels of subtlety/dressing which hide the principle quite well. I love book tests – and the use of a quotation book certainly adds lots of scope for extra reveals and presentation.

This is a really clever idea which enables you to do a self-working coin bend. You show the spectator two contrasting coins, they choose one, and it bends whilst in their hand. That’s really the way it plays. It requires a gimmicked coin which you may already have (especially if you own Automata 1 – no more hints!). There is also an extension of the routine which gives you a double bend and still virtually no moves, and other ideas which use the principle in different ways! The very simple handling is completely disarming – and I can certainly see this making its way into my walkaround set. Great stuff.

This is a clever idea using the latest technology! You send the spectator a photo of themselves, and then they make a choice from a selection of cards with the names of different superheroes on them. When they look at the picture it shows them looking like their freely chosen superhero! You will need a smart phone to do the routine as presented (though you could, of course, do the whole thing with just an ordinary prediction, but the photo is much more effective). This is a really fun routine – the selection process is engaging and easy to do. Makes me wish I had a smart phone!

This is a prediction effect using three dice and a nice premise about being ‘out by one’ all the time. A clever principle is in play here which is surprisingly deceptive. Not my favourite routine on the disk but worth a look.

This starts off looking like a memory test, and turns into a coin which vanishes and re-appears on a card previously signed by the spectator. Uses a couple of old principles to create a nice routine – which could also leave a business card in their possession at the end. An unusual and self-working trick.

A poker chip passes through a solid table top. A very simple method first found in Bobo, but with a modern twist. It looks like clever slight of hand but a very simple ‘gimmick’ does all the work for you. I’m not sure it makes a routine in itself but could be a nice extra in the context of a longer routine.

Three spectators draw pictures on business cards and you correctly identify who drew which one – revealing the final picture without even looking at it. Gary explains how you can make the necessary wallet very cheaply – though I can see myself using this routine with the Jaks Wallet. There is something very poweful about this routine which far outweighs the simplicity of the method – and the emotional involvement of drawing a picture always engages the spectators. Well worth a go.

This is a clever mind reading effect where you can reveal the song a spectator is merely thinking of after a very fair looking procedure mixing up a stack of cards with different songs and artists on them. The clever principle used here is not new, but is not widely known – and you will fool yourself when you use it. This is a nice routine – and I could also imagine re-using the principle with other applications.

This is a sort of just chance routine using a wallet with four different coloured compartments. The spectator(s) chooses 3 out of 4 pockets and, of course, the remaining one is the one with the cash. This is an old principle (which I first met in a wonderful Larry Becker book) applied to a prop which you can buy online (Full 52 can supply these if you can’t find your own). Easy to do, very clean and very fooling for a spectator.

A nice little prediction effect where a set of business cards are mixed face up and face down according to the spectator’s choices. You correctly predict two outcomes and then the final card is found to be your own business card. It is essentially a Peter Duffie routine (from Cards by all means) re-imagined with business cards. This one didn’t do that much for me but is certainly in the puzzling category. You can re-use the principle in a number of ways – I rather like the idea of using it with lottery cards.

The interaction between Dave and Gary makes the teaching segments engaging and everything is clearly explained. They bounce off each other well and often chip in thoughts and subtleties which are really helpful. Almost all the routines are in the hands with very easy re-set. Several involve business cards – which is always a bonus if you’re looking for more work!

We think this is another cracking DVD and are excited to hear that a 3rd disk in the series is in the offing (with the return of Chris Congreave). There is a great variety of routines here, all of which are very easy to do. But don’t despise them because of their simplicity – these are almost all strong effects which will play very well in the real world.
Highly recommended.

Available direct from MagicShop.co.uk (with thanks to Full 52 who kindly supplied the review copy). £19.99 (at time of writing).