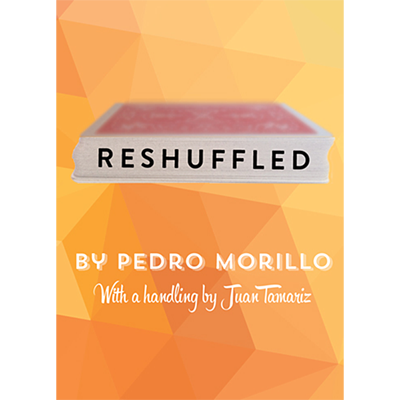 If you’re familiar with Paul Gertner’s original Unshuffled effect (published in his classic Steel and Silver – now rather hard to get hold of as a book, but Unshuffled is on Vol 3 of his DVD series), then you will know what a strong piece of magic this is. In Reshuffled, Pedro Morillo takes Gertner’s original effect and adds a very surprising extra climax. 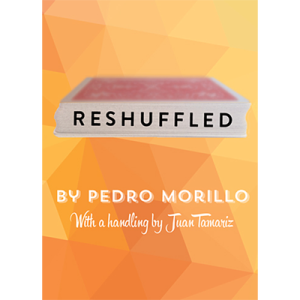 In case you’re not familiar with the effect, it plays a bit like this. Performer introduces a deck of cards with the word ‘shuffled’ written on the side of it. Spectator chooses a card which is then lost in the pack. During a series of perfect shuffles, the word on the edge of the pack keeps changing, finally changing into the name of the chosen card. The extra kicker comes when all the cards (which have been very freely shown throughout the routine) turn into the same card as the chosen card.

It’s a great twist on a solid routine. The deck is cleverly gimmicked to mean that the final change requires no slight of hand (this is not a new concept, but has been used in various decks in the past). With any change there is a payoff. This obviously adds a strong extra climax, but also slightly reduces the freedom with which you can handle the deck on the way. At the same time it does make the force (sorry – you did realise there must be one of them) in many ways much cleaner – so there are pluses and minuses to this.

The main part of the routine is largely unchanged from the original – and it will require you to do a perfect faro shuffle. This is not a trivial thing to get right every time, so that will put some people off. But if you’re prepared to put the work in you will have a very powerful effect in your hands.

The legend that is Juan Tamariz has come up with an alternative handling which doesn’t require a perfect faro shuffle – instead relying on a number of manual ‘interleaving’ processes. This obviously opens the effect up to a wider range of performers, however in my view the routine is made much less strong – it is a slower and clunkier handling. It also requires an extra card you’ll have to make up or buy. Although I like Morillo’s attempt to justify this with an engaging patter idea, it just doesn’t do it for me.

Teaching is provided via a link to an online video. The way you set up your deck is very clearly explained – and you will need to mark the sides of the deck yourself – you only get one chance to get that right! The teaching of the routine itself is slightly harder to understand due to Morillo’s quite thick Spanish accent – but to be honest, if you can do the perfect faro then the routine is more or less self-working. The deck itself is printed by USPCC – some people find these decks harder to do a perfect faro with but once you’ve broken the deck in a bit it should be perfectly possible.

Two minor downsides would be that the continual faroing of the deck will reduce it’s life – so I hope they will make cheap replacement decks available – since historically decks gaffed in this way have been a tad on the pricey side. The routine is also really primarily suited for a seated formal setting since it is really necessary to use a table. Nick Einhorn has apparently come up with an in-the-hands handling, but I haven’t seen that so can’t comment.

So Reshuffled is a difficult one to give a verdict on. The effect is certainly astonishing and will get great audience reactions. However, you really need to put in the work on a perfect faro if you’re going to perform this – so enter with your eyes wide open! I like the extra climax this deck enables, but one could argue that it is almost ‘too perfect’ and so flags up the earlier force. If you took that view you might prefer to buy Gertner’s DVD and learn the original (which you could make up with any deck) and get some extra routines to boot.

The decision, as they say, is yours. Available direct from MagicShop.co.uk for only £21.99 (at the time of writing)