Recreation is the latest ebook release from the creative mind of Michael Murray.  We’re a big fan of Michael’s work – he is a clever and original thinker – and so we were very interested to read his latest take on the ACAAN plot.  This, as regular readers will know, is something of a pet subject for me.

The headline effect, Recreation, comes at the whole idea of ACAAN from a different angle.  Rather than a freely chosen card being at a freely chosen number, the effect is rather the revelation of a card and number remembered by the spectator from a freely shuffled deck. 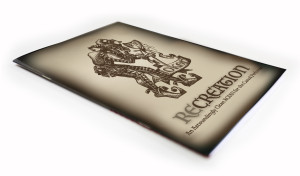 It’s an interesting direction to come at the effect from, and the structure of the (original) routine requires that it take place in the context of a longer series of entertainments – with a delay between the choice and the revelation.  Some variations on the method are given which would, in theory, allow greater freedom about this.  Although the premise of the routine actually provides a logical reason for the gap which the method requires.

I enjoy the way Michael writes and this booklet is no exception. As he describes Recreation you get to the point where the routine is completed and the method still not revealed.  The method I created in my mind at that point turned out to be one of the variations described later – and I have to say that, for me, this method (and the freedom it gives) is preferable to the original idea.

It is difficult to say more without risking exposure.  Suffice to say that Michael’s idea is very sneaky, but for me I just couldn’t see myself performing it that way in the real world.  But as always with Mr Murray you get several pages of extra ideas and variations – and in these are some wonderful gems.

There are also 3 extra ‘ACAAN’ routines.  First up is TACAAN (A table top ACAAN).  You will need a little confidence to perform this one and it is not certain but it is a strong effect.  The spectator remembers a card at a number, then the pack is shuffled (freely) and their card ends up in the same place.

MIRACAAN is a variation on TACAAN but is more of a revelation of a freely thought of card and number.  PSYCAAN takes this idea a step further but is probably more suitable for using with magicians rather than laypeople.

Michael is very widely read and one of the wonderful things about reading his work is the way you benefit from his gleanings amongst the ideas of others – so there’s a really useful ‘fishing’ sequence in one of the routines and a beaut of a linguistic deception in another.

For me, then, the best thing about this release is that it stimulates some ideas and adds some more weapons to the armoury.  I don’t think I would actually perform any of these as they are in the real world.  But another performer might slot them straight in, and either way you will benefit from and enjoy reading this excellent little (23pages) booklet.

At only £5.99 direct from MindFX (who kindly provided the review copy) it is well worth a look.