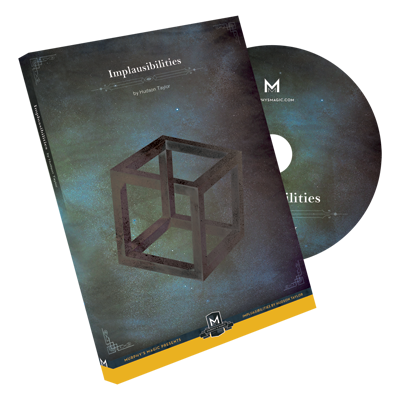 We’ll say right at the outset, Implausibilities is not a beginner’s DVD. The routines require a number of more advanced skills e.g. perfect Faro. But before that puts you off, there’s a significant teaching section (about 15 mins) on how to Faro. There’s some good detail here – including tips and technique and developing muscle memory – but it’s still going to take you some work if you can’t already do this. I have never spent the time mastering a perfect Faro, but I have to admit that even after this short teaching spell I was achieving better results – 80%+ accurately weaved – so I think with some time this is within reach of all of us. 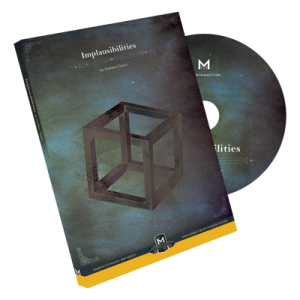 Before I make a few more general comments, let’s get in to the review of the effects.

This is a nice effect where spectator apparently reads another spectator’s mind – managing to stop dealing at a card that the other spectator has only thought of. It looks very fair but for me involved quite a drawn out process – which suits his laid back style but might not suit yours. The explanation is slightly disjointed, but part of the method does require a bit of ‘jazzing’ so I suppose some of us will need some help with understanding that. Very clever multiple methods going on here. It doesn’t require advanced card handling but it does really need a table. He teaches both a set up and an impromptu version. Worth a look.

A very clever ‘finders’ routine where 3 chosen cards are located in a squeaky clean way despite having been lost in freely shuffled and cut sections of the deck. This is one of the routines which requires a perfect faro and is enough to encourage you to learn it – it’s a very subtle and clever piece of magic and the presentation works well.

I’ll admit it – this fooled me badly when I watched it the first time. It is a very clean and fair looking ACAAN routine based on an ingenious Alex Elmsley principle. It’s not quite a pure ACAAN – one spectator removes an unknown quantity of cards and then a card chosen by another spectator and shuffled into the deck is found at that number. This is probably technically a ‘mathematical’ card trick – but it doesn’t have that feel at all and is brilliantly constructed. And this trick alone would be enough to encourage me to learn my perfect Faro. I really like this. And the genius thing is you don’t even know what the card or the number is before the climax! A minor variation is taught which makes you even more ‘hands off’ but also reduces the success rate!

Building on ideas of Leipzig, Rusdeck and Bannon this is a lovely matching cards/do as I do routine. The strongest element of this, for me, is the beautiful presentational hook which really turns this into a meaningful piece of magic rather than just a trick. Some setup is required and, you guessed it, a perfect faro. But a pleasing little effect.

A bonus section of almost an hour teaching some useful sleights and controls. The sleights are well explained and some extra wrinkles taught too. I’ll just outline briefly what they achieve.

Dropshift – 1 handed control from centre to bottom in action of spreading cards on the table. A useful, sneaky and not too difficult move.
Shovel Control – this time you control a card as you’re dribbling the pack to the table (an in the hands variation is also taught).
Center Shift – shifting a card from the centre of the deck to the top as it is apparently pushed in to the middle. Quite tricky!
Parifax Change – a variation on the Erdnase colour change.
Mechanical Popout – based on an Ed Marlo move, enables you to pop a chosen card out of the deck one-handed.

Hudson Taylor comes across as a very nice guy and is very thoughtful about what he does and how he does it. He is very articulate and is excellent at crediting sources which I always appreciate. It is very apparent that he uses these routines himself and has thought carefully about why he does what he does and how to connect and communicate with it.

Explanations are thorough – in some cases I almost felt like there was too much detail. None of the routines require anything other than an ordinary deck of cards, and most are impromptu. The sleights he teaches would have many applications and are worth studying.

In short, if you like your cards and are prepared to put in some practise then I would highly recommend Implausibilities. The routines are extremely powerful – and once you’ve mastered the techniques, not too difficult to do.

Available direct from Merchant of Magic for £22.99 (at the time of writing).