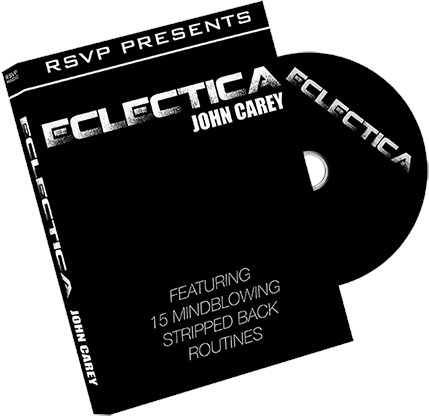 As is often the case, I had a pile of items waiting to be reviewed, but the decision ‘which next’ was easy to make when I saw some John Carey in the pile. I have really enjoyed John’s work in the past so I had high hopes for Eclectica. As usual, I’ll review the effects first before making some more general comments. 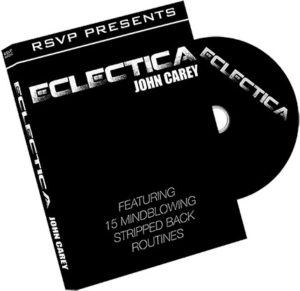 Backs to the wall – based on Dai Vernon’s ‘All backs’ routine this is a nice effect where the cards appear to be printed with backs on both sides, but then become printed. The solid backs on the NOC playing cards look particularly good with this. You’ll need basic card handling skills (holding breaks, dribble force, etc.) which aren’t taught in any detail – but there is no tricky finger flinging here (unless you include the Erdnase colour change which is a little knacky – but an alternative is suggested). A solid (irony intended) routine building on the shoulders of others.

Bluff Cull/Ensemble – a great technique for culling cards which is hidden in plain sight, leading on to a ‘spectator cuts the aces’ routine. The culling is covered by some pattering which won’t suit everyone, but it seems like a nice solution to the challenge. The cutting the aces routine is really nice – using a variety of subtle techniques which are all easy to do. Nice.

Three Phase Daley – extends the classic two card transposition effect into something greater. Two aces and jokers repeatedly change places. I like this routine a lot. In the performance/explanation I found the similarity in design between the NOC Aces and Jokers rather confusing (the NOK joker is just a star in the middle of the card – so could easily be confused for an ace to my mind) – so I would perform this with more visually distinctive cards. But a great routine and easy to do.

Mental Sandwich – nb this is the first of three effects on the DVD for which there is no performance video so the DVD goes straight to the explanation (confusingly the performance is listed on the menu, but that also takes you to the explanation). The spectator merely thinks of a card from a packet of 5 taken from a shuffled deck. The 5 cards are then lost in the pack and the chosen card is instantly located between the 2 jokers.  Some nice thinking here – utilising subtleties old and new.  Not too tricky, though it does require a bit of culling.  There’s some extra teaching on the cull technique provided separately – which is handy since it is used in a few of the effects.

Sent and received – the performer telepathically sends a card to the spectator who is shown to be correct. A lovely homage to Dai Vernon using a sneaky and very easy technique – a good one to have in mind for a performance with a borrowed shuffled deck.

Top, Middle and Bottom – the spectator eliminates cards from the top, middle and bottom of the pack which is shuffled along the way, finally selecting a card. This card is fairly lost as the spectator shuffles and cuts the card away into the deck. You can then reveal the card they’re “merely thinking of” and, if you choose to, locate it in an instant. Another great little routine – nothing complicated here but an entertaining effect.

Slow Motion Triumph – this is a packet version of the triumph effect where the cards gradually right themselves after they have been mixed face up and down – finally leaving only the spectator’s chosen card the right way round. On the way you’ll learn a lovely Justin Higham small packet false shuffle which is beautiful. You’ll need another technique which is taught in ore detail earlier on the DVD

Telekinetic – to a nice premise about ‘telekinesis’ cards repeatedly turn over within the pack, the final one being the spectator’s chosen card. There’s a small set up which then pretty much makes this one fly with very little effort on your part. Another goody!

Splistville – another one which has no performance video, only an explanation. Inspired by Paul Harris’s Las Vegas Split, this is quirky effect.  A face up four appears in the middle of the deck, and is then “split” into two ‘twos’ and then into four aces. This didn’t do too much for me – though it might have felt stronger if we’d seen the effect performed first.

Homage to Bannon – a ‘reverse sandwich’ effect where the two jokers appear and then the whole deck becomes sandwiched between jokers with the exception of the spectator’s card. John’s take on a Bannon effect – need I say more to assure you of the quality?

Whispers – the jokers ‘whisper’ the identity of 3 cards chosen by the spectator. As an added climax, the jokers turn into the first two chosen cards. Simple to perform, strong, effective. A number of effects on the DVD (including this one) rely on a sort of small packet ‘repeated ambitious card’ phase – so you might not to perform more than one of them in a set.

Assisted Ambitions – a spectator’s selection repeatedly jumps to the top of a small packet of cards, and then the three ‘indifferent’ cards instantly change to match the first selection. Influenced in lots of ways by the excellent John Bannon, this is another strong routine – though note my comments earlier about the ambitious sequence. I particularly like the penultimate phase of the routine where the chosen card rises through the packet though everything is held in their fingertips.

Invisible Interlude – a card effect with a coin, or a coin piece with a card? You decide. After a series of coin vanishes and reproductions, the coin vanishes and reappears on top of the spectator’s chosen card in the middle of the deck. This will require some basic coin handling skills but is a nice routine for involving your audience if you can manage it. John briefly teaches all the moves involves and gives references if you want to investigate them further.

Two’s company and? – this is the final one with no live performance section. It is a great sponge ball routine which has a different shape to the one you normally see magicians do! It’s got a few good moves and forms a pleasing little ensemble.

One card and one thought – the first spectator selects a card and then the second one creates one in their mind – and they miraculously match. Based on an Al Leech idea this is a very practical solution to the effect. There is a little bit of set up involved, but the set up enables a very clean looking effect which nicely involves your spectators.

Everything is well attributed and the explanations are peppered with little tips and ‘questions’ to consider. John’s something of a magical magpie – he’s widely read which means he’s unearthed some gems of moves and put them together into clever routines.

His magic is very efficient – achieving a lot of magic with minimal moves – in this respect he’s similar to John Bannon whom he obviously admires. None of the effects use gaff cards – and most can be done with a borrowed shuffled deck. I would think anyone would find a couple of routines that suit them here – and most will find several. Recommended.

Eclectica is available from Merchant of Magic for £24.99 (at the time of writing).