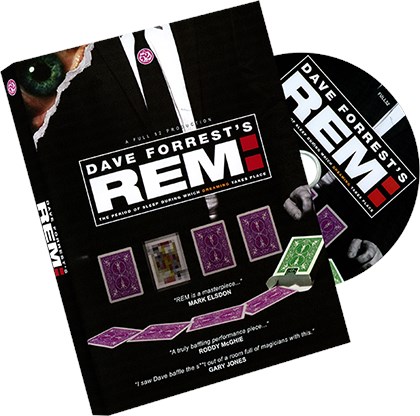 Dave Forrest is one of the cleverest magic inventors around at the moment and REM is a fine recent example of his work. This is a multi-level prediction with a brilliant premise which engages the audience. Despite numerous very fair-looking choices you are able to show your spectator a photograph which shows three different predictions to be 100% correct. It is all themed around a dream which the performer has had and the elements of which correspond to the spectator’s choices. If you are familiar with his effect ‘The Man Who Paints the Future’ it has some similarity with that, but it has been completely re-designed to fit a close up context. 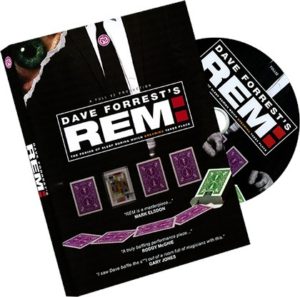 You receive a DVD which features a live performance and thorough explanations. The DVD also includes artwork so that you can print your own photograph for the prediction.

You will need to supply some blank cards (you can use playing cards or just any old bits of card) and write on them in different colours. You’ll also need a deck of cards (Bicycle of course! though other decks are available).

The explanation is clear (as long as you’re ok with Scottish accents!) and detailed. There are lots of different levels of subtlety going on here. It’s one of those effects which is difficult to assess from the point of view of difficulty. It doesn’t require lots of technical expertise – but it does require a little linguistic subtlety – so you need to be confident to speak and to ‘jazz’ a little depending on the choices the spectator makes.

In addition to the ‘self-working’ version, he also teaches an alternative handling using a slightly different force which may require some further skills. It has a different type of reveal at the end which will appeal to some people more. Personally, I think I prefer the original version.

The good, the bad, and the borrowed…

Dave has very cleverly taken a number of old (and newer!) principles and combined and extended them to make a very strong and fooling effect. He is good at attributing the different elements as he goes along – and one whole element is actually borrowed from a brilliant Mark Elsdon routine we have reviewed elsewhere.

Make no mistake, REM is an involved routine which takes some time. For that reason, I don’t think it would fit many table-hopping scenarios – it is more of a performance piece in a more formal setting, or where you have longer with your spectator than the ‘gaps between courses’ normally allow. Related to this, I would be just slightly concerned that the spectator might forget the card they are thinking of, since there is quite a lot of presentation until the final reveal comes along.

Notwithstanding these small reservations, I really like this. The premise is engaging and the final prediction is a complete surprise. There are some really subtle techniques going on – some of which I could see me reapplying in other contexts. There are no multiple outs on the prediction so the reveals really are squeaky clean. I’ll definitely be using this!

REM is available from Merchant of Magic for £27.50 (at the time of writing).