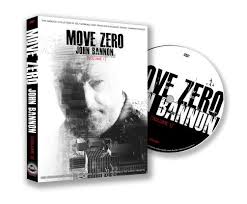 It’s Bannon, it’s self-working, you’re going to love it. But I guess you’re probably going to want a little more than that in this review of Move Zero.

Bannon is a great magician and a clear teacher. He starts this first in a proposed series of DVDs with a definition of what self-working magic is. Throughout the DVD Bannon continues to explain his philosophy of what makes a strong ‘self-working’ trick. The concision of his explanations matches the concision of his effects and it is particularly interesting to hear about his personal favourites from all the effects he’s created over the years. But let’s take a look at the magic taught on this DVD.

Collusion
Two spectators place jokers at positions they choose themselves, and the cards at these positions are used to create a new card. This is then located by dealing down to the number made by adding the spectators’ two numbers. This is a lovely twist on the ‘Gemini’ principle which turns it into a pseudo-ACAAN. A lovely twist combined with a nice premise and, of course, dead easy to do with only minimal setup. He even explains a way to set up on the fly without too much effort.

Sort of Psychic
This is a lovely effect where under the premise of testing the spectator’s intuition they are able to locate their chosen card by simply cutting the deck. This is a beautiful example of how the presentation and framing of an effect can make an enormous difference. It takes a potentially dry procedural trick into an engaging effect. A great one to have up your sleeve when you’re asked to do a trick.

Ulterior
A spectator chooses a card which is lost in the deck. The magician then removes a few cards and the spectator manages to eliminate all but the chosen card. Although this is move-free, it does require some linguistic subtlety. Bannon covers this in some detail but it does require a little ‘jazzing’. For me this is not one of the strongest effects on the DVD, however the whole thing is really an ulterior motive for setting up a stack within a freely shuffled deck. In other words, having performed this effect you are then in a position to perform an even stronger effect which you’ve set up without the spectator noticing! Neat.

Prophet Motive
After an enormous amount of random shuffling and dealing on the part of the spectator they then manage to cut to a card which matches one you put aside before the whole thing began. This is another great ‘spur of the moment’ effect which is very easy to do but packs as they say a lot of ‘bang for your buck’. Bannon teaches a number of different tweaks to the presentation and takes you through some clever subtleties.

Ion Man
This is a quirky little prediction effect (based on a Max Maven trick) where the spectator chooses one of three imaginary coins, then chooses whether it is heads or tails up, and you demonstrate that you have predicted all their choices in advance. This is all about sleight of mouth – one of my favourite kinds of magic. An unusual little prediction and a neat idea.

Ban-nihilation
The spectator shuffles the deck and then cuts the deck somewhere between two ‘marker’ cards. The card at that location is found to be the card predicted on the back of the marker cards. A couple of little subtleties make this a super-convincing and super-easy effect to do – so it’s presentation all the way.

Four Sided Gemini
Three randomly selected cards match a fourth you have already set aside. This is really a slightly different presentation for the method used in Collusion. A clever routine with a nice presentation – you’ll do this often.

Perennial
Again, this is really a nice presentation for a principle you’ve seen elsewhere on the DVD. I like the presentation – where you predict a card which has been chosen via the random elements of an unknown date selected by the spectator. You can do this anywhere with any deck with no setup. Another fabulous little effect. 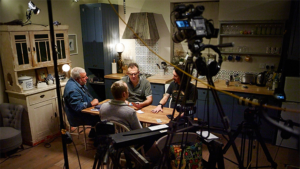 It is perhaps slightly paradoxical that a DVD called Move Zero teaches you a number of different ‘moves’ – but none of these can be described as ‘sleights’ but are useful tools for performing the tricks on the DVD and many others. Here they are:

Jay Ose False Cut – not really a move since if you can’t cut a deck of cards to the table you really shouldn’t be handling cards. But a very deceptive looking false cut. He also teaches a variation where the spectator does the work!

Cross Cut Force – another classic yet simple way of forcing a card. Bannon teaches you some of the psychology that will make this even more deceptive. Also a variation on this called the Deal & Cross Cut Force which adds a further apparent level of fairness.

Balducci/Cut Deeper Force – another ‘self-working’ force which is used in a number of the routines.

Rosetta Control – a nice way of helping a spectator who can’t riffle shuffle a deck to achieve the same effect – and also to control a card or cards in the process.

Remote Control – This is a clever away of allowing a spectator who can riffle shuffle do so whilst still keeping control of a particular card.

Equivoque – a powerful mentalism technique which is used in a number of different effects on the DVD. Bannon shares a few thoughts on this – but to be honest I felt like this section was a little light on detail given that he describes himself as a ‘student of equivoque.’ I think this is a bit of an omission since on a ‘self-working’ DVD, this is in many ways a sophisticated technique. True, it doesn’t require any ‘moves’ – but the mental and linguistic gymnastics involved in using equivoque well could arguably take this out of that category. I love equivoque and have read quite a bit around it myself and used many tricks utilising the technique over the years, so none of the effects proved problematic for me – but if you’re an out and out beginner you may need a little more help.

Bring on Volume 2. Which is to say, we love it! The teaching is clear and it’s shot in a low-key understated way. There are some really strong, easy to do, and pretty much impromptu effects here. I will try to work a few of them into my memory banks so they are available at any request. This is a great DVD which you must buy!

Available from the Merchant of Magic for £25.50 at the time of writing. (Many thanks to Big Blind Media who kindly supplied the review copy.)