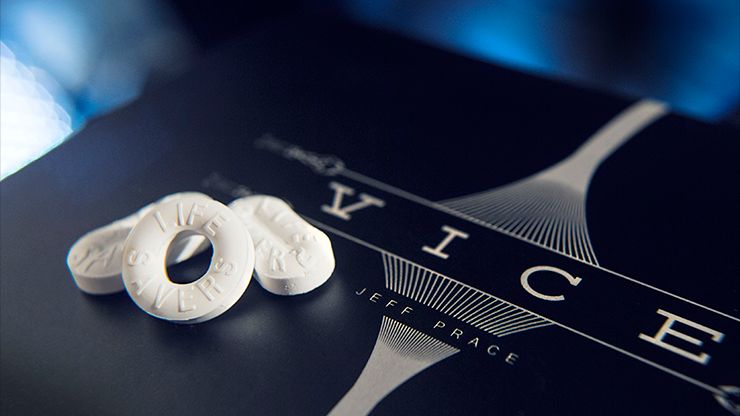 Jeff Prace is a young magician I had never heard of, but the premise of Vice is a wonderful visual bit of magic which I was keen to take a peek at. The effect is simple to describe – you visibly squeeze a Lifesaver mint (UK readers – think Polo – more of this later) into a squished shape and then can hand it out for examination and eating!

This is the sort of effect that any street magician worth his salt would kill for. It happens right in front of your eyes and leaves (until it dissolves or crunches in their mouth!) an impossible souvenir that will last in their memories.

The method is direct and straightforward. You are supplied with a couple of gimmicks (you only use one in performance, so you get a spare – a nice touch) to get the visual part and then (hope I’m not tipping too much here) 50 real ‘pre-squished’ mints for you to hand out. 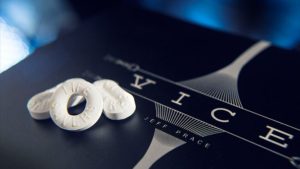 The first part is easy – easier than wrapping a birthday present. The second part is rather more fiddly – and you may need a second pair of hands to help – but overall it is still not too tricky to construct. And it ought to last a decent length of time. You will need to supply a couple of things you will probably already have lying around your home.

If you don’t want to make up the gimmick, then it only requires a modicum of extra sleight of hand to cover it.

Like many recent releases Vice comes with a link to online teaching. I’ve occasionally had a couple of issues with the streaming from Murphy’s so you may prefer to download. It runs to a little over forty minutes of teaching and covers everything in a good level of detail.

There’s a bit of banter in the studio performances, and a slightly awkward live performance, and Jeff is a competent and clear teacher. My only complaint (with my tongue in my cheek) is the repeated use of the somewhat dubious word ‘smoosh’ to describe the squished mint!

I deliberately added an ‘s’ to this title since you are actually taught three different variant handlings. Different performers will favour one over another – that’s for you to choose. They each use what are essentially coin sleights modified for use with mints – so if you’ve done any coin magic you’ll be doing them straight away. In fact, with the size of the mint and the great visuals that the gimmick provides, I think the sleights are easier than normal coin magic.

An extra kicker is taught in which you visibly squish the mint printed on the packet! This is a great extra touch – and the necessary artwork can be downloaded for you to print yourself. (UK readers see below)

He also teaches two extra routines – a linking polo effect and a ‘karate polo’ effect where you throw a mint in the air and ‘catch’ it on a biro. These are explained very briefly but it’s a nice touch to add these extra ideas.

From a general point of view I love this idea. It is a super routine and the clever but simple construction allows both amazing visuals and a minty clean finish! You get a good supply of squished mints – though you’ll obviously need to buy refills if you give them out. I believe these will be available separately. Re-set is pretty quick and it doesn’t take up much space in the pocket. And it would be ideal for ‘impromptu’ performance when you’re out and about.

The one negative comes from my perspective as a UK writer. We don’t have ‘Lifesavers’ here we have Polos. But all the gimmicks are clearly labelled ‘Lifesaver.’ Now on one level this doesn’t matter – because it is very unlikely a spectator would notice or worry about that kind of detail – so this may just be magician’s guilt. And for the main effect you can almost certainly get away with that. It would, really, rule out the extra kicker – since the Polo label on the packet doesn’t really work visually in the same way (and the artwork provided doesn’t have a ‘squashed’ Polo logo). But this is a pretty small point. And if you’re really bothered, I guess you could just justify having some mints you brought over from America – and have you seen this weird thing they can do?

All in all we love the concept and think this is a great release at a very reasonable price.

Vice is available in the UK from Merchant of Magic for £27.99 (at the time of writing).