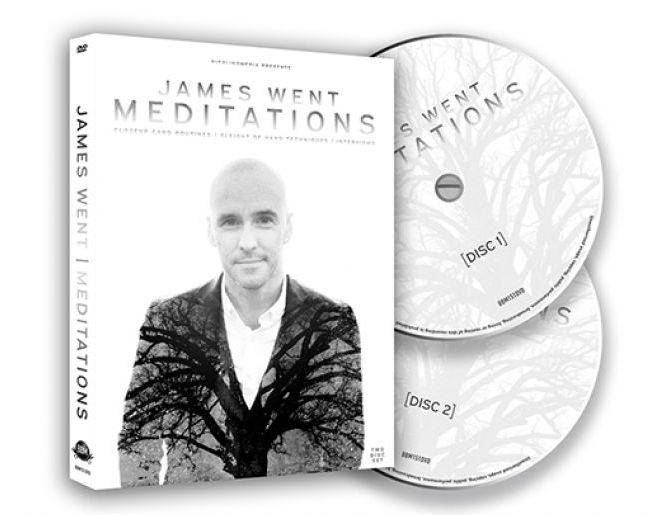 Meditations is a double DVD set, the debut release of the very talented Welsh magician, James Went. In spite of my age, I first came across James through the wonderful children’s television series Help My Supply Teacher is Magic. But as this set demonstrates, he is a very clever and thoughtful magician in his own right.

This releases oozes class (is that even possible? Can class be oozed? Or is oozing not classy?) – even from the DVD cover. I love the simplicity and elegance of the tree silhouette on the outline of his jacket. But that’s enough about externals, what about the content?

Right from the introduction, James’ passion and concern for the details of an effect comes through. He’s read widely (and attributes brilliantly) and has clearly worked at the routines at length. The DVDs are shot to BBM’s usual high standards, and each disk contains effects, techniques and some interview sections. 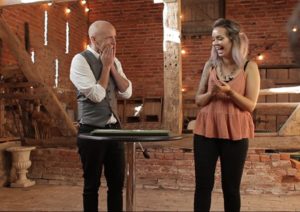 Inevitable
James starts with a really strong routine – a distant cousin of the open prediction plot. A spectator chooses one of two decks of cards and it is set aside. Then the other deck is shuffled and they get to select any card. This is turned over and the value of the card is counted down in the deck to reveal another card. These two values are added together to create a new number and they count down to the card at that number in their deck. This is the card you predicted at the outset. A clean and strong routine, easy to do – definitely worth playing with.

Roy’s Sandwich
This is a nice sandwich routine where the two red aces, inserted at random locations near the top and bottom of the deck manage to move to capture a card merely glimpsed by the spectator earlier. In the (optional) second phase this is mixed with a kind of triumph effect where the deck is mixed up (face up and down) and instantly righted at the same time as locating the chosen card. This is heavily influenced by a Roy Walton routine as its name implies. This requires a little more technical skill (the moves are explained in another section of the DVD) but the second phase, in particular is extremely easy because of the structure of the routine. Beautiful magic.

For Krenzel
A card is merely peeked by your spectator – you’re then able to read their mind and reveal the card, which then instantly reverses itself in the deck. This is basically a routine which showcases a move which James created. The choreography beautifully covers the move – which is worth a short investment of time to learn. 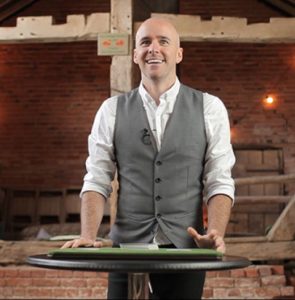 Conditional Triumph
This is a great example of how presentation is king. James justifies the ‘Triumph’ plot by making a ‘find a card’ trick seem more and more impressive. This really works well with James’ personality and the premise primes your spectator for a good reaction. It can be done with a borrowed, shuffled deck, and doesn’t require too many knuckles to be busted for a great effect.

Sandwich Thing
A quick sandwich routine – combining a number of ideas by other people into one snappy routine. A card is selected and lost in the middle of the deck, and a face up king placed on the top and bottom of the deck – these instantly locate the chosen selection in the middle of the deck. Then the two kings visibly jump out of the deck trapping the selection a second time. And then a moment later the kings are back on the top and bottom of the pack and the selection is in your pocket. Again, there’s a little card handling required. But if you’ve been doing card magic for any time it should be within reach.

Poker Con
In this entertaining routine, the spectator is involved as your ‘confederate’ in a poker routine when, from a well-mixed deck, the performer manages to deal four cards to complete a perfect hand with a card the spectator chose at random. Requires some setup but utilises a lovely simple but convincing false shuffle which is justified by the plot narrative.

Selected Daley
This is the first thing James published (in a lovely ebook I own – Celtic Cabal). A selected card is lost in a deck. Four Aces are discovered in the course of a faux gambling demonstration (during which, a la Daley’s Last Trick, the red and black aces repeatedly transpose) and then the selection appears in the middle of it. A nice technique for controlling the chosen card from the middle of the deck which will require some practise but is worth the effort.

Broken Triumph
Another take on the Triumph plot. A spectator glimpses a card and then shuffles the deck. The performer can then both read their mind to reveal the card and then perform the standard Triumph effect – where a mixed face up and face down deck instantly rights itself with the exception of the chosen (“merely thought of”) card.

Collectors
This is a traditional collectors plot – but what makes this so nice is again James’ presentation and the routining which is very slick.

Searchers
Like a slow motion version of the earlier sandwich trick where the 2 aces move towards the spectator’s selection in two stages! Fair bit of handling required. 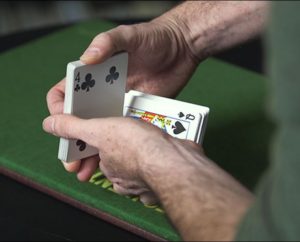 4 of a Kind Production
Does what it says on the in – a fancy way of producing four of a kind. Not too tricky and nice if you like this kind of thing. And if you do, there’s another version too!

Tit Peak – Tabled Injog Turnover Peak
This is a move to peek a card in the move of handing a deck out to be shuffled by a spectator. A little bit of a knack, but pretty straightforward and versatile move. There’s also another variation taught which can be done standing without a table and without being contrived at all, the acronym this time is TITTIES…

Top Card Production
This is a way of producing the top card apparently from the middle of the deck. A useful and fairly easy little technique.

Jack’s Ginger Snap
A variation on a Jack Tighe move – again making a card look a lot like it comes from the middle of the deck. A nice little move.

Spread Peak
Again, does what it says on the tin – a peak which is made during a spread on the table. This man is obsessed with peaks. This is quite disarming.

Relaxed Pass
The pass is another move James rates highly – interesting how some sleights come in and out of fashion. As its name suggests this one is deliberately casual to avoid the awkwardness sometimes associated with this kind of move. James has combined parts of two other moves to make this pass and it does achieve he casual feel he is aiming for.

Thoughts on Controls
James teaches a couple of controls whilst explaining his thinking around this key area of card magic. Nodding his head in the direction of a Roberto Giobbi essay (from Confidences) there are some helpful tips here around the psychology of making your controls more convincing.

Spread Pass
It’s another pass people. The selected card is passed as the spread is squared up. You’ll need to work at this to get it smooth but it is a very useful move and James gives you several tips born of playing with the move incessantly.

Spread Half Pass
This is the technique used in Roy’s Sandwich (and turns up quite a bit in Roy Walton’s work). A potentially under-used move and well worth getting your fingers around. 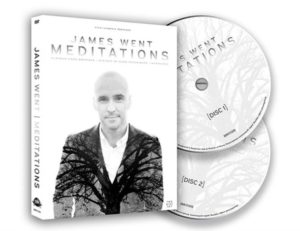 As much as I love magic, I enjoy getting to know people even more, so I always look forward to interview sections on these kind of DVDs. They contain and nice mix of serious and light-hearted questions. You do get to see a bit of the real James and he comes across as a really nice guy.

One major encouragement to any aspiring professionals is that he started out in magic (relatively) late in life an yet has achieved a great deal in a short time. It’s never too late to learn. Oh, and like me, he’s a big fan of magic books – what’s not to like?!

The story behind how he got involved in Help My Supply Teacher is Magic is also really fascinating and he comes across as a very humble guy. I really enjoyed these sections.

This is an impressive debut and I hope it brings James more recognition in the magic community. There are some great effects and useful techniques.

Whilst I love his relaxed and personable performance style I don’t think his teaching is quite as clear as that other BBM stalwart, Liam Montier. James often goes a little quicker and seems to assume more. To be fair, many of the releases Liam has taught on have been aimed at beginners and Meditations is probably a little more advanced than that.

Some of the more complicated routines have a nice feature – an extra fast recap for practise purposes so you can refresh your memory or practise without having to go through the whole teaching slot. And as often on BBM disks, there are some fun messages on screen and little bits of banter – as if the magic weren’t enough.

A great release for any lover of card magic. Meditations comes recommended and is available direct from the Merchant of Magic for £34.50 (at the time of writing).

Many thanks to BBM who kindly supplied the review copy.