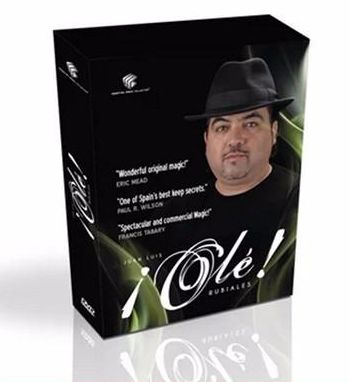 Ole is another beautiful release in the Essential Magic Collection series featuring the unique magic of Spanish magician Juan Luis Rubiales. Like many of these releases it is a 4-DVD set, and is so full of content (4 discs, 9 hours, 34 routines!) that we’re going to spread the review out over 2 parts (you can read part 2 here). So we’ll crack on with Disk 1 and 2.

This first DVD contains routines suitable for a semi-staged or parlour setting. I’ll run through the effects and some comments (I’ve noted where they are ‘studio’ performances rather than live ones).

Bill Coincidence – a borrowed banknote is folded up and left to one side. A spectator shuffles a deck of cards face up and face down making lots of choices on the way. At the end of this process all the face down cards are removed from the deck and placed in a glass. They then turn out to reveal the serial number from the bank note. Nicely routined – easy to do (owing a lot to a John Bannon routine) – and some thoughtful presentational touches.

Bread Deck – fun comedy effect where you ask a spectator to treat a loaf of bread as if it is a deck of cards. After a lot of fun you reveal the card the spectator has selected. This is mainly about the fun not the magic. And although it is ‘easy’ to do it will require good spectator management and presentation skills to sell this one. 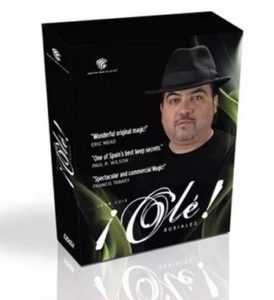 Three Fly Cookies – You can probably guess what this one is about. 3 cookies (biscuits) travel one by one from one hand to the other. It’s crazy – but in his hands it works!

Fished Card – This is the classic ‘Lasooing a card’ effect with an initial series of rope tricks and a comedy finish. Don’t look here for a radically new method – but learn from a great presentation – which makes some sense of why you would perform the trick in the first place. Oddly the last part of the explanation went into Spanish.

Invisible Deck (studio performance). Starts with a ‘standard’ ID style routine but ends in a quite different place – where you produce the single card (i.e. not the deck) from your pocket. There are a few nice subtleties here, but the method feels a bit clunky to me. On the other hand you do only require a normal deck.

Card in Balloon (studio performance). As with the Fished Card, I really like the way his presentation justifies the use of the balloon. There’s a lot to be learnt from the way he’s thought about these things. It is a very short explanation but covers all that is necessary.

Forget and Remember – studio performance – this is a slightly drawn out performance for my style (but the Spanish invented the Siesta – so I probably need to learn from them right?!). But in essence two spectators look at a different card each, and then apparently forget the name of their card. Then one spectator remembers the card that the other spectator has chosen and is actually sitting on! And in a final phase the spectator apparently forgets all that has happened in the previous section! Quirky, but not really my kind of thing. But a great example of taking a fairly simple procedure and making a feature out of it. 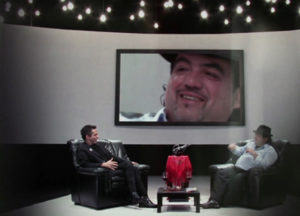 Each DVD contains a variety of extra features. For me, one of the highlights of the whole set was the extended interview which was split over the four DVDs. Luis de Matos discusses life and magic with Rubiales whilst they sip glasses of wine. I will cover all the segments together here.

They discuss Rubiales own journey in magic – how he got started, how he became a professional, how he stopped and how he came back to it. In the second section they talk about magic competitions and how to find your performing character. In the third, it becomes more personal as he talks about his wife and children. We learn how the Opongo box came to be so-named, about the relationship with his grandmother, and about his hobby of caricature drawing.

The fourth and final segment is a little more philopsophical and plumbs the depths of topics like the nature of magic, the direction of magic as an art form, how he feels about other people performing his material, and what his own favourite releases are.

I am fascinated by people and their stories and found these segments to be delightful and moving. They are all in Spanish but with subtitles for those of us who don’t speak the language. He comes across as a passionate and wonderfully humane person. These were great. 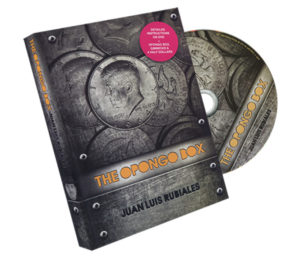 The other ‘extra’ on the first DVD is an explanation of The Opongo Box – which is a kind of Okito/Boston/Slot Box all in one. This has been released separately and I presume is all the same material on that DVD. it is very interesting to watch, but not that much use without the box itself! But perhaps it would help you decide whether to purchase it yourself.

This DVD mainly consists of 2 close-up acts in themselves and a detailed explanation of their different elements.

The Jacks – Rubiales’ pet card routine – which combines a number of classic effects – with his own unique twist…. Without an enormous amount of explanation it would be difficult to do this justice, but it takes classic effects like Twisting the Aces, Reset, Travelers etc. and combines them into a routine packed with magic and flowing beautifully.

Dice Command – is another beautifully blended routine, which takes as its simple premise the idea that a set of dice control the behaviour of the playing cards. Again, hard to do justice to this without a detailed explanation.

In addition to the interview already mentioned, the extras on this DVD are two pdfs. These look to be extracts from previously published articles in a magazine. The first is on on the classic stabbed card plot. The second is an impossible travellers routine. These are a nice extra, especially for those of us who like printed material as much as video!

I hope this gives you a flavour of the first two DVDs in the Ole set. I will make a few more general comments about the set overall at the end of the second section of this review.

If you’ve already heard enough and can’t wait to purchase Ole – you can get it from the Merchant of Magic.