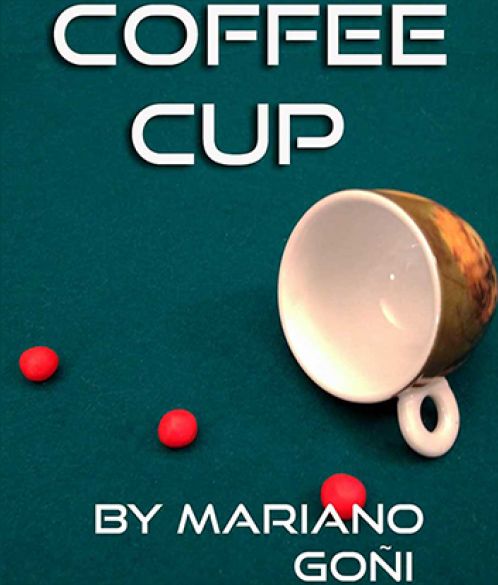 Coffee Cup brings together several things I love – magic with cups and balls and beautiful and elegant magic. If you know anything of the breadth of this wonderful art of ours, then you will be familiar with the Spanish legend who is Rene Lavand. The routine we have here is directly inspired by Lavand’s poetic masterpiece (see the clip at the end of this review) – but where his depends on exquisitely executed sleight of hand, Goni’s Coffee Cup relies on some sneaky gaffs to produce a very similar outcome.

Everything but the coffee cup!

Coffee Cup comes with the plasticine and gimmicks you need to make your props. You will, however, need to provide your own coffee cup! There is also a link to the online teaching – just over 20 minutes of explanation.

As we have said, it is inspired by Rene Lavand’s beautiful routine – but the idea of using a coffee cup and balls is an old one (and they also reference Hugard’s Magic Manual as another source). 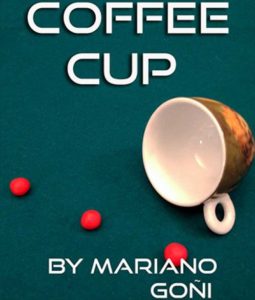 The basic routine involves three balls and a cup. Two balls are placed in the cup and one discarded, yet it keeps on returning to the cup. In a final surprise after all three balls are discarded a larger ball appears in the cup. In other words, it’s a bit like two in the hand, one in the pocket, but using a cup. And the cup is handled very cleanly – mainly with only one hand – which appears to eliminate any suspicion of sleight of hand.

The teaching section also include a ‘street’ handling – but this adds very little and doesn’t feel enormously practical.

Using plasticine balls is a nice idea which aids the handling and the (basic) sleights involved. It also means you can readily replace them if for any reason you need to.

I don’t want to give too much away, but in some ways this is akin to the chop cup – but with a ‘more sophisticated’ gimmick. In can’t quite decide if that adds or removes from the strength of the routine, but it does allow for a very free handling of the props before and after. And it also facilitates the very disarming handling. (Apologies – that is an unfortunate choice of words since it is so reminiscent of Lavand’s 1-handed routine!)

The method means that you need some set up to perform this. In an ideal world you would be in your own (controlled) formal close up setting. It could be used for table–hopping – but not so easily as many other routines of the kind.

I haven’t actually seen the explanation of Lavand’s routine, but from what I understand Lavand’s is a pure sleight of hand routine which could therefore be done more or less impromptu with fewer constraints.

The jury is slightly out for me on this one. I still remember the first time I saw Lavand’s routine – and that is over 20 years ago – it is a beautiful and powerful effect. Coffee Cup is extremely clever, but in bringing this effect into the realm of someone with less technical skill, it somehow feels to lose something.

The explanation/teaching is basic but adequate with plenty to get you started. It is the sort of routine you might want to jazz a bit anyway. There is a useful ‘recap’ video without words to help you learn the routine. A live performance, as ever, would have been much appreciated.

Coffee Cup is available from the Merchant of Magic for £34.99 (at the time of writing)

Well done for getting this far. Here is your reward. Rene Lavand’s beautiful masterpiece…