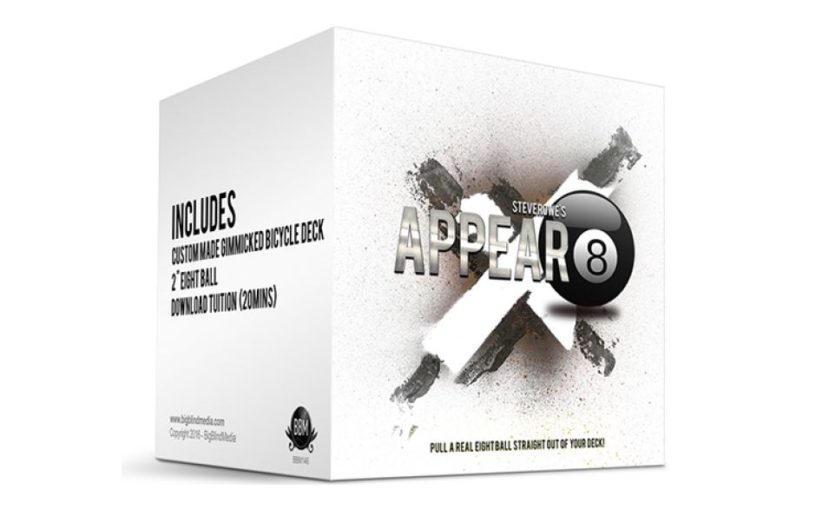 Appear-8 was quite a success at the recent Blackpool Magician’s Conference – so we were pleased to put it through its paces in review. We’ve been impressed with Steve’s ideas in the past (e.g. the excellent Mint) – would this one perform so well?

The effect is simple (and very visual) – you show a card box with a picture of an 8-ball on it – and the ball visually pops out – leaving no picture on the box and a very real 8-ball in your hand.

You get a link to an online teaching video which runs just short of 20 minutes. You also get the regular 8-ball, and the cleverly gimmicked card box. Did I mention it is all made up and ready to go? No craft skills required here! The whole thing comes well-packaged in a nice sturdy cardboard box.

Appear-8 is very easy to do requiring minimal sleight of hand. Everything is well explained on the video including tips on how to protect the gimmick. It even teaches you how to make a deck holder from gaffer tape!

The effect is extremely visual. The gimmick is nicely-made but you may need to be a little careful of angles. Reset is more or less instantaneous. 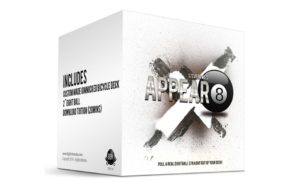 When I just watched the effect on its own, I have to say my first question was ‘Why?’ Why would you have an 8-ball printed on a card box? Why would you want to produce one? It’s a lovely visual thing but would it stand alone?

However, the more I thought about it the more pluses I could see. There is something wonderfully physical and solid about an 8-ball (it makes a great sound when dropped on the table!) – which makes the effect very surprising. John Bannon has kindly given permission to include an idea from his wonderful Smoke and Mirrors book which suddenly builds the production into a routine and gives it a certain logic.

Big kudos for providing a well-made gimmick which is ready-made – so you can play with it out of the box without needing a black belt in crafting. Oh, and I love the pun in the title. Appear-8 is a great little release, available from Merchant of Magic for £29.50 (at the time of writing).

(with thanks to  BBM and Murphys Magic who both independently supplied a review copy!)