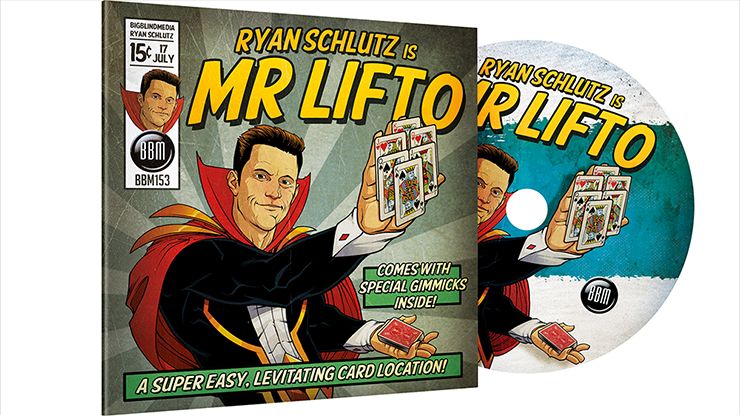 Mr Lifto is a pleasingly visual effect which is simple to describe. The spectator chooses a card which is lost in the deck. The magician then removes a bunch of cards from the deck which proceed to stick to his obviously empty hand. In a flash, all the cards fall away but the magician manages to catch one – the chosen card.

Like so many of BBM’s releases, this is a largely self-working routine. You will need very basic card handling skills – but not really any sleight of hand. Ryan has a fun presentation which involves the spectators well – and as has already been mentioned it is highly visual.

You are provided with the gimmicks you need to ‘do the magic.’ The main gimmicks should last a very long time. A little extra something will need replacing – but it is readily available, and the DVD suggests a number of different alternatives so you should be able to source the necessary easily and at low cost. You’ll need to provide your own deck of Bicycle Cards. 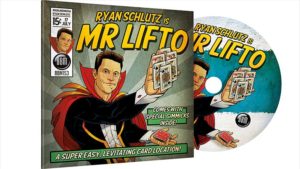 It’s hard to find much more to say about this. Teaching is via DVD which includes a short ‘studio’ performance and very clear explanation of how the whole things works. The DVD runs at less than 20 minutes but is clearly shot and easy to follow. I enjoyed the jaunty background music on one of the sections!

There’s not really any re-set, and the deck can (with only tiny reservations) easily be used for other effects too. The gimmick itself, might lend itself to other routines with some imagination.

Mr Lifto is a great little release. It isn’t the most stunning effect we’ve ever seen – but it has great visuals and is easy to do so we would consider it well worth a look.
You can pick up Mr Lifto from the Merchant of Magic (who also have a nice video review if you want a second opinion!). £21.50 (Mr Lifto is also available in blue)

With thanks to BBM who kindly provided the review copy.