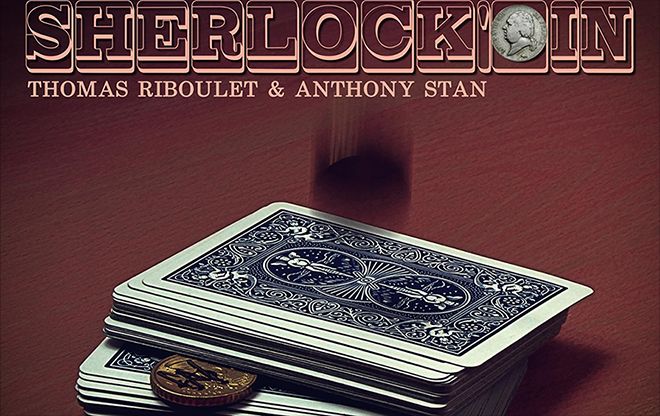 A card trick, also using a signed coin, that’s easy to do? Sherlock’oin sounds like it ticks lots of boxes – but how did it fare under our review?

The effect is easily described. A card is chosen and lost in the middle of the deck which is returned to the case. Then a coin is borrowed and signed and vanishes instantly. It reappears inside the deck, inside the case, resting on top of the chosen card.

Anthony also teaches a variation where a signed coin is in view right until after the spectator has taken the deck. A little more sleight of hand is required but it is still fairly straightforward.

You receive a neat package containing a highly gaffed deck of cards! The box is gaffed and so are a number of the cards themselves. The good news is that this is all done for you – so no construction required here. That being said, they do supply some special ‘something’ which would enable you to repair/replace some of the gimmicks – though the instructions for doing so are not yet available online. There is, however, a link to about 40 minutes of online instruction. 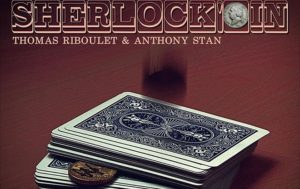 When I first saw the trailer it reminded me of an old Jay Sankey release – In a Flash – and it is good to see this credited on the website. Someone (Eugene Burger???) once said “There are few tricks that can’t be improved by the judicious use of flash paper” (I may have just made that up!) – and in some ways I prefer the plot and simplicity of handling of the Sankey effect.

On the other hand, it is probably fair to say you can have a bit more freedom in handling the Sherlock’oin cards – and could probably perform another effect or two with the deck before or after. This would be harder with In a Flash.

The clever gimmicks do make the handling of Sherlock’oin very straightforward. However, I found the vanish to be a bit fiddly with a light coin. I suspect that with a bit more practise this would come good, particularly as the gimmick ‘wore in’ a bit. The vanish is certainly incredibly visual and would give the impression that you were a black belt in sleight of hand!

The gimmick puts some constraints on the size of coin you can use – and in the UK I think that would restrict you to a 1p, 5p, 20p or old £1 coin. (I’ve not been able to try with a new £1 coin – but having checked the dimensions online I think they would be too big; as are 2p and 50p coins). However, I see no reason why you couldn’t perform the effect with a lady’s finger ring – and the impact might be even greater.

Teaching is clear and everything has been put together really well. I would expect the gimmicks to last for a decent length of time in normal use.
So there’s lots to like about this. But I remain slightly unconvinced. Sometimes magic creators go so far out of their way to make things ‘easy’ to perform, that the solution is more ‘complicated’ than necessary. I think this feels a bit like that. For that reason for my tastes I prefer the simplicity and the spectacle of In a Flash. But for those who prefer the slightly higher degree of freedom with these cards, and the potential for a very visual and fooling vanish, Sherlock’oin is well worth a look.

Sherlock’oin is available from the Merchant of Magic for £32.36 (at the time of writing)