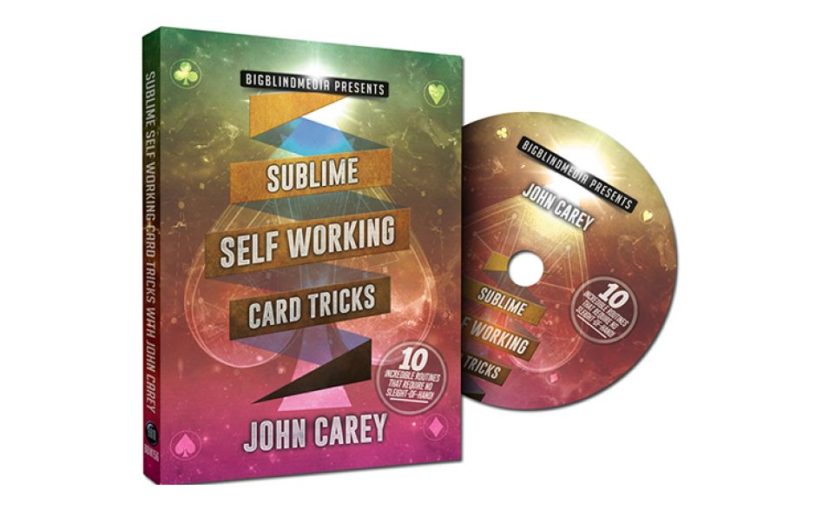 BBM have an impressive reputation for putting out DVDs of high quality self-working magic, so does this latest release from John Carey carry on the tradition? Read our Sublime Self Working Card Tricks review to find out more.

John Carey is a real understated gentleman of magic and we have looked at and enjoyed many other of his releases before. This latest release promises “10 incredible routines that require no sleight of hand”. Let’s get straight into the routines.

Opening Time – you name a card – they choose a number – and they match! The performance of this was amazing. In performance you won’t always get quite such a strong result. But with any outcome you still have an extremely strong and all but self-working effect. Some lovely subtlety built into this simple routine.

Think as I think – to a nice premise about learning how to handle playing cards the spectator makes all the choices as they shuffle and cut their cards and choose one. Yet amazingly you end up thinking of the same card. This is disarmingly fair and incredibly simple. (first published in crafted with carey – and if you like his work this is well worth a look)

One hand one pocket – this is very clever. The spectator mixes some cards up and chooses one. The performer takes the cards in one hand (the other hand has been in his pocket since before the trick began) and deals them out – and the spectator’s card is seen to have disappeared. When the performer removes his hand from the pocket it contains the missing card! A simple little gimmick makes this one self-working. I love the plot and the simplicity. Great routine.

Yes you caan – this is a great simple card at any number variant. The spectator thinks of a number and further randomizes it. Then looks at the card against that number on a ’52 on 1’ card from your pocket. This is found to match the card already predicted in an envelope at the beginning. This uses a clever mathematical force and a bit of subtlety to make a strong routine. Instant reset and minimal pocket space. What’s not to like? You will need to print a special 52-on-1 card for this – pdf supplied on dvd.

Scattered – This is a sort of ‘invisible deck’ kind of feeling routine where the spectator makes lots of choices and yet the outcome of their choices is shown to be predicted. There’s a little bit of set up but most of the work is done with clever wording. I’m a bit ambivalent about this – I generally enjoy this kind of effect but am so familiar with the various techniques that it felt like there was little new here. But if you’ve not performed this kind of thing before this is an easy introduction.

A la goldman – this is a ‘do as I do’ kind of effect which starts with both you and the spectator shuffling the cards very fairly – and yet after a super clean looking procedure you have both chosen the same card. This is a great easy to do effect with no set up required. Wonderful.

Dice Caan – a card is chosen based on the roll of three dice. This is found to be the card predicted at the beginning. This may be to do with my mathematical bias or my mis-spent use – but I would hazard that the principle on which this is based is very well known – even amongst non-magicians. This made this one of the weaker items on the DVD for me.

Sync – a spectator ‘creates’ a card by combining a suit they’re only thinking of with a value they have cut to from a shuffled deck – and yet you are able to show you’ve thought of the closest match. There are some nice subtleties in this which give you a lot of bang for your buck!

Make believe – (the only) non-card effect on the DVD. The spectator examines three imaginary coins and makes some choices about who is going to hold what. And yet the coin only thought of appears in the performer’s hand. A nice use of an old gaff which makes a pleasing little routine. I think I would have done a little more ‘verbal work’ and given the spectator a further degree of freedom – but if you’re starting out with this kind of routine, this would be a very easy starting point. 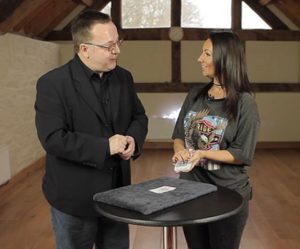 Redford unplugged – based on an effect by Patrick Redford – from a shuffled deck, three cards are chosen for three spectators and based on some random decisions they are distributed in different ways while the performers back is turned. Yet you are able to reveal who carried out which actions and the chosen card. This is a whole lot of window dressing for a very simple force. With a bit of presentational skill this could be a very entertaining routine.

As John himself says, these are not magician-foolers but are designed for performance in the real world. That being said, the most frequent word in my review is probably ‘simple’ – and sometimes these felt almost too simple. I think there are 2 or 3 routines that would play very strongly, but several that slightly underwhelm.

The possible caveat here is that John himself has a very understated performing style – and it is possible that with your own performance style these could fly a little more. This would be a superb DVD for someone who was very new to card magic, and a good DVD for someone who has been around a bit more and is looking for one or two more impromptu effects to have in his repertoire.

Sublime self working card tricks is available from the Merchant of Magic for £25.50 (at the time of writing).

(With thanks to BBM who kindly provided the review copy)