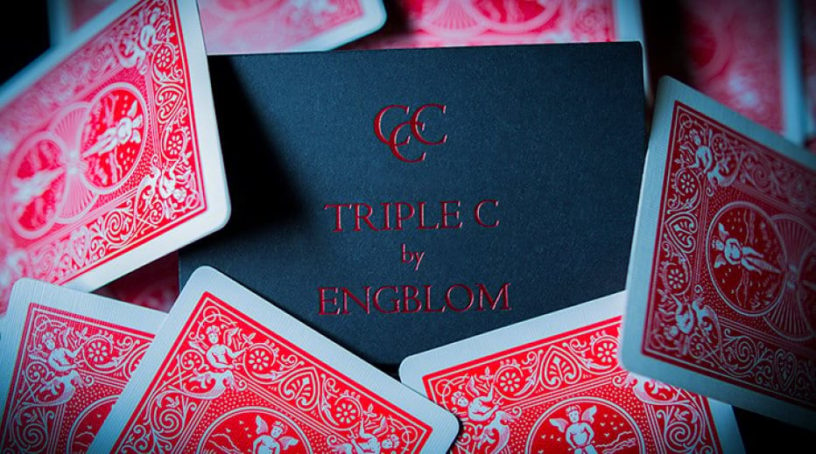 Triple C is billed as Christian Engblom’s prized and closely guarded secret which he is releasing to the magic fraternity after years of keeping it (largely) to himself. So what is it? Find out in our review…

Triple C is actually an idea that has been around for a very long time – it is a particular way of gaffing pack of cards which enables you to control one or more cards very easily. It also enables an extremely ‘free and fair’ handling of the deck which makes the idea that you are controlling anything seem impossible.

Although the idea was published a long time ago, as the saying goes, the easiest way to bury an idea is to publish it. And in 30+ years of reading magic books and magazines I have never seen any significant routines utilising the principle. Engblom has refined his own techniques which work with this principle and, by way of a taster, given us three great routines using these.

You receive a factory prepared deck of Bicycle Cards, and a link to online video instruction. Unusually, this has been split into several different videos – performances, introduction, explanations, etc – which makes it quite easy to watch just the bits you want.

Name Spell – spectator freely shuffles the deck and removes and remembers a card. Then they return it to the deck which they can shuffle and cut again. They then spell their name to locate their card. It looks quite impossible. And it does require a little bit of ‘jazzing’ on your behalf. I would say this is not an effect for the absolute beginner – but it is so strong if you can get it down. There are some really clever ideas in the explanation which will help you with the jazz!

Poker Demo – the spectator chooses any four of a kind and loses them in the deck. They then specify any number of hands of poker and indicate which is to be the ‘lucky’ one – then as you deal out the hands, their four of a kind all appear in the hand they have specified. The technique involved in this may initially put you off – but the way the deck is gimmicked actually makes this easier than it would be with a normal deck. Another real fooler, but not for the beginner.

He Knows – this is a great two spectator routine. The first spectator chooses a card and loses it in the deck. Then the second spectator is able to name the card! A lovely ‘instant stooge’ kind of effect which could be a lot of fun with an obliging spectator. This is probably the easiest of the three routines taught. 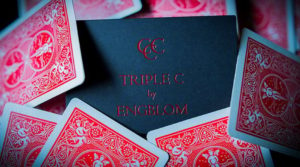 Triple C or A minus?

The teaching is clear – but some of the more advanced moves are only briefly shown. For this reason I would recommend it to an absolute beginner. Although the special deck does some of the work for you, the core technique which Engblom teaches will require a fair bit of practise to get it smooth. I hope you’re not the kind of magician that a bit of work would discourage! And there are more simple techniques you could use to get started with the deck.

The additional ideas section teaches a few other techniques which could take advantage of this special deck and should spur you on to think of other applications.

I really love the tricks which all fooled me on first viewing – these are ‘magician foolers’ for sure. The way the deck is gimmicked does allow a significant degree of freedom in the handling which is wonderful, but you will need to bring to this a certain amount of sleight of hand too.

You can use it as your ‘regular’ performing deck with no concerns and the way it is gimmicked makes it very versatile. Refills decks are also available at a very reasonable price.

All in all there is a lot to like here. If you’re prepared to put in the work, Triple C will enable you to perform some real miracles.

Triple C is available from MagicShop.co.uk for £27.99 (at the time of writing). It is also available in blue. Refills can be found here.