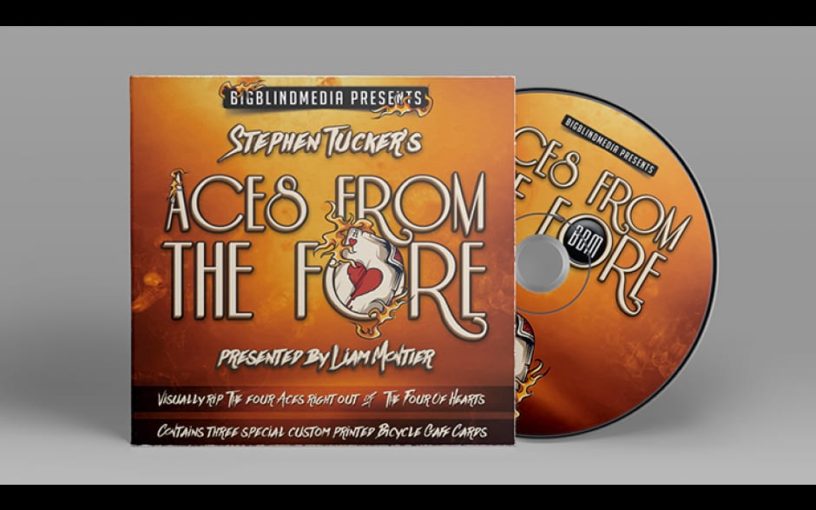 Aces from the Fore is a new release from Stephen Tucker put out on a BBM DVD. It is a lovely visual effect. After claiming you will locate the four aces, you actually produce a 4 of hearts. But then you ‘split’ the four into four aces, one at a time. It really does look like you pluck the pips off the card.

You are provided with some specially gimmicked cards and an instructional DVD. You will need to provide your own deck of Bicycle (or equivalent) cards.

The DVD teaches a very simple handling which is so easy to do – yet still looks very impressive. If you have greater card-handling expertise there are a few options – including a really nice extra display (which actually requires very little extra work).

Another great feature of the routine is that it sets you up perfectly to run into McDonalds Aces. If you don’t know this routine (where have you been?) it is an absolute classic – and incredibly clean looking four ace trick. Liam’s handling is very nice and I like the way that he uses a slightly different set of moves for each Ace.

Liam also teaches a regular deck (ungaffed) version of Aces from the Fore. This is a sort of combination of the title effect and an ambitious card routine. If you already perform an ACR you will be able to do this no problem. And if you don’t, everything is taught clearly. The gaffs definitely allow for a cleaner/clearer routine – but if you want to be able to perform this anywhere it is a nice inclusion. It does require a set up. If that puts you off fear not! He also teaches an impromptu version – with a borrowed shuffled deck!

The impromptu version actually has a slightly different – but no less effective – effect. From a (borrowed) shuffled deck, two spectators each choose a card. You then promise to find it – but actually locate a different card. This card is equivalent to their two cards ‘added up’ – and you proceed magically to separate the card into their two choices. Nice 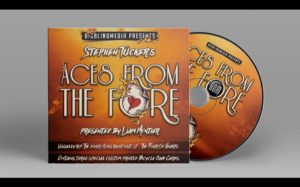 Aces from the Fore is – on its own – a great trick. It is very easy for the spectator to follow i.e. the effect is clear; it looks very magical; and it is very easy to do. The possibility of running straight into MacDonalds Aces means you’re ready to go for a powerhouse card routine with almost no effort required.

Unusually for a BBM release there are a couple of minor ommissons on the explanation side. For example, I didn’t see an explanation of the Elmsley Count which is used in the McDonald’s Aces routine. Nor the force used in some of the variations. However, you will probably already have ‘your favourite method’ for the latter, and teaching for the former is easily available.

On the plus side, it was nice to see Liam back on form with more energy in his teaching than the last release of his that we reviewed.

This is a really great release and comes highly recommended. Aces from the Fore is released tomorrow available from the Merchant of Magic for £18.50 (at the time of writing).

(With thanks to BBM who kindly provided the review copy).