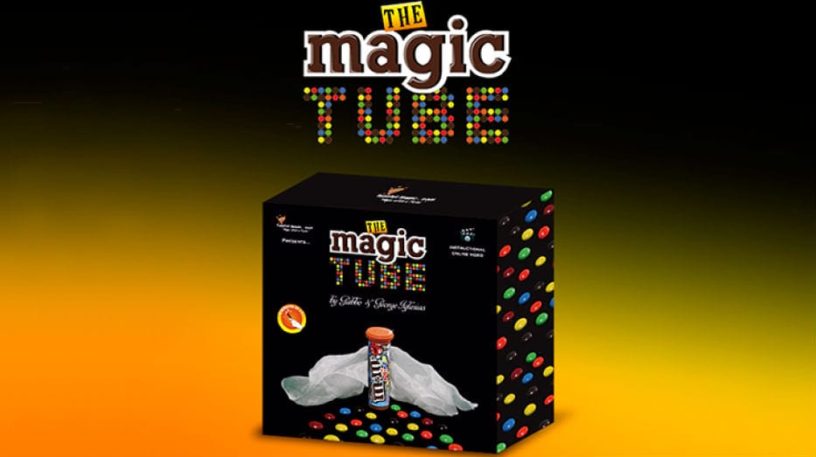 The Magic Tube is a little different from most of the magic tricks that we review. At first glance, it looks a bit like it might be a children’s magic effect, but as we discovered, it is actually more versatile than that. 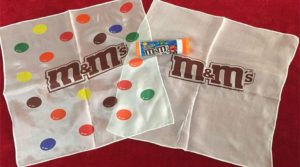 Well the Magic Tube for a start. Which is just an M&Ms minis tub – and still smells of chocolate! You also get two specially printed silks and a special something – which you may already own… And the almost obligatory link to an online instructional video. This lasts about 30 minutes and has jaunty, verging on annoying, background music. It teaches 5 effects…

Travelling Silk and chocolate production – inside an M&M tube is a silk printed with M&Ms. This vanishes in the magician’s hands and reappears in the tube which your spectator is holding. You repeat the vanish of the silk and this time it reappears in the tube, but the M&Ms have vanished from the silk. But when you remove it from the tube, a number of real M&Ms have appeared. 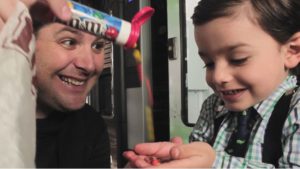 This is the ‘base’ routine and it is nicely constructed with a few neat little subtleties. I think it would appeal particularly to children – and his son (who features on the live performance) is very cute!

Colour Transformation – I really liked this effect. You pour a few M&Ms out of a tube and then with the help of 2 spectators eliminate all but one. Suddenly all the remaining M&Ms change to the colour chosen. This uses a force which is well known but which works brilliantly with M&Ms – especially when using 2 spectators. Great idea.

Colour Revelation – Another mindreading effect where you can reveal how many M&Ms a spectator has secretly removed from a tube. And then reveal all the colours of them too. This is a really subtle little routine. I like it a lot.

There’s another routine which is a sort of a variation on these last two where the M&Ms change into the same colour in the spectator’s hand. But I thought this lacked something of the directness of the other two. 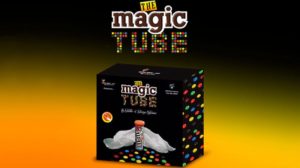 Raising M&Ms This is the 5th ‘bonus’ effect and is a bit random! You pour some M&Ms out of the tube. Then the remaining M&Ms ‘rise up’ and overflow out of the tube. You’ll require a few extra things not included to perform this – if you really want to – but they’re all readily available. I thought this was a bit of a lame duck…

I always think that live performances can be really helpful in assessing a magic trick and so it was good that all the routines on The Magic Tube are performed to ‘real people’ – though the ‘signature’ routine was only to his young son!

The mind-reading effects were both very effective and made the use of ‘The Magic Tube’ effectively invisible – where else would you store M&Ms. I like the way the effect focuses on the sweets in these routines and the subtlety of some of the ideas. As mentioned at the beginning, they are also suitable for adults taking this out of the realm of a purely children’s effect.

Perhaps best of all, you get to eat a lot of M&Ms in preparation and in practise!

The Magic Tube is available from MagicShop.co.uk for £37.50