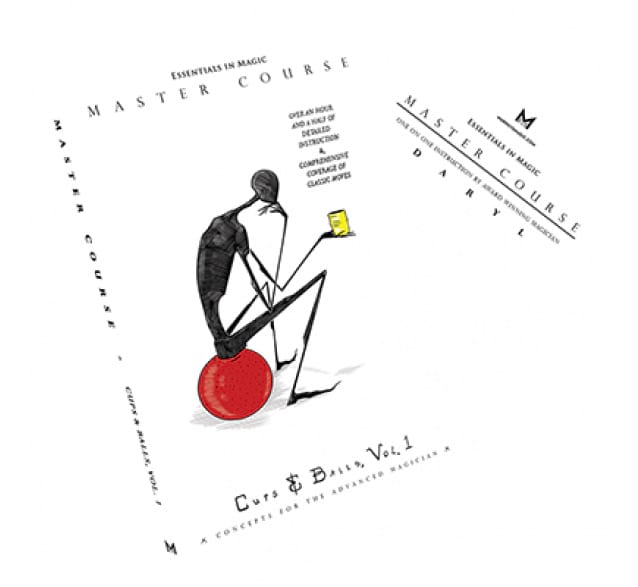 The Master Course in Cups and Balls is a 2 DVD (or download) training course featuring the much lamented Daryl. Our review is going to cover both volumes to give you a flavour of the set. The DVDs are dubbed in English, Spanish and Chinese which probably covers a good number of viewers!

First impressions… not the best

I must admit that when I first started watching I felt like the course was a bit confused about its level. Daryl was at pains to point out this was a master course and that you should first watch a ‘basic’ course (presumably this companion disc). 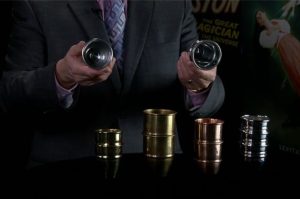 However, in spite of that, the first 20 minutes or so is spent showing you different types of props you could use and even classifying them. It felt slightly pointless and slightly pretentious – but the saving grace is that Daryl is such a good communicator that it isn’t too wearing. And the somewhat portentous cymbal roll for each main title screen made me chuckle!

The definitions section was more obviously useful – since it is helpful to be able accurately to describe moves etc. And the discussion on misdirection was also helpful.

Daryl then takes you through all the basic moves you can imagine: how to load cups, how to palm balls, fake transfers and shuttle passes etc. etc. But it is not just the basic moves – many more advanced techniques are taught and useful moves like the Charlie Miller move. And all the classic bits of business – like cup through cup (and some nice finesses on that) or deeper on the inside than outside, or wand through cup.

The teaching is excellent and clear – with multiple camera angles being used where that is helpful. And at this point I want to suggest that it is actually an excellent starting point in and of itself – there is no need to watch a primer first.

In addition to teaching the moves, there are plenty of tips along the way and it is here that Daryl’s enormous knowledge and research come in to play. There are tips from Slydini and Michael Ammar. Insights on different performing conditions. And many references to routines and performances by other great magicians (Tommy Wonder, David Williamson, Dai Vernon and Jay Marshall to name just a few) – which would give you a ton of further work to research if you are serious about developing your routine.

The final element on the first DVD is Daryl’s routine. Now although this is a great routine, I was a little disappointed. Because on a DVD titled Master Course in Cups and Balls you might have expected a full on 3 cup routine. But Daryl’s routine is more akin to a Chop Cup routine – with one cup – albeit an ungimmicked one. It is a super routine, but I was looking forward to seeing Daryl’s own unique take on a 3 cup routine. But maybe that’s just me.

The nice thing about his routine is it is more or less impromptu. This is great because with only minimal preparation you can borrow all the key elements. It is well structured and there is some really helpful coverage and reflection on the final loads. 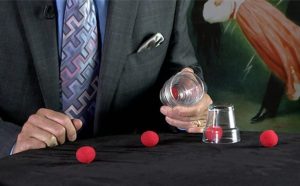 The second disk definitely assumes you have seen the first since it contains less detail on the individual moves and elements. Instead it simply teaches three routines. A nice touch is the way they are taught with see through glasses so you can see what is going on!

First up is Nick Trost’s essentially sleight free routine. I didn’t even know Nick Trost had done a cups and balls routine! If I’m honest it felt a trifle long to me – a few too many phases – but nonetheless it would make a great routine to start with and includes some nice subtleties.

Next up is the big daddy – Dai Vernon’s routine. So many modern routines based on this. There’s a reason it’s a classic. And Daryl performs it beautifully. Everything is clearly explained, again with clear glasses.

In a nice touch there is a second performance after the explanation to help you learn the timing of the thing.

The third routine was new to me – to my shame – since it is apparently in the Stars of Magic book (it is – I just checked my original edition!). It is Dai Vernon’s impromptu routine. It has a certain amount of overlap with his normal routine but some interesting variations. 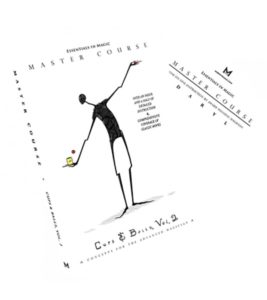 Again, there are lots of tips on audience interaction and handling – even the type of clothing you should wear! Daryl knows what he’s talking about and so this is full of gems.

At £14.99 a volume these are a very good value introduction to this classic of the magic world which helpfully brings together both the essential moves and some classic routines from different places. The Master Course in Cups and Balls would be an excellent place to start your voyage of discovery and a handy reference even for those who have been performing for a while.

You can purchase the Master Course in Cups and Balls Volume 1 and Volume 2 from our friends at MagicShop.co.uk.