Close Up Magic, Cups and Balls

Cups and Balls – a Bicycle-Cards.co.uk introduction

Though I’m no master, I love the Cups and Balls. It has spawned so many creative variations over the years, and even when you know the basic methods it is still a joy to see the effect performed well. No less a magician than Professor Hoffman called the cups and balls “the groundwork of all legerdemain” and Houdini apparently commented to the effect that “No one should consider themselves a magician unless they can perform the cups and balls.” 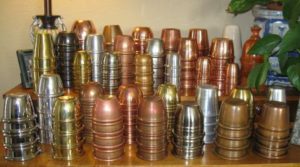 All that being said, I would encourage all aspiring magicians to get familiar with this classic effect. So over the next few months I intend to do some reviews on some materials to help you learn. And I will gather all our Cups and Balls related posts here.  Be warned.  As you can see from the photo it is very easy for people to get a little obsessive about collecting cups…

First things first, if you want to learn the Cups and Balls you will obviously need a set of cups!

Choosing your cups and balls

Like many things in life, you can spend as much or as little as you like on these. If you take your magic seriously then I would advise that you look beyond the sort of very basic plastic set that looks like something in a child’s magic set. Though if you’re really on a tight budget you can pick up a plastic set for less than £3!

However, if you’re a little more serious about the magic thing, you will probably want to pick up some kind of metal set. They typically come in aluminium, copper or brass. 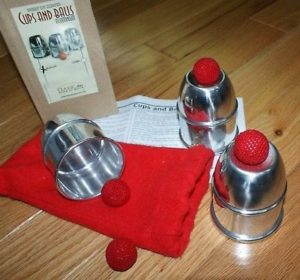 A good basic set would be this Combo set from Bazar de Magia.  A combi set includes one cup which is gaffed as a Chop Cup – which means you can use it for either kind of routine. This makes the set very good value. This set is very similar to my first set though mine was produced by Morrissey, the now defunct Canadian magic company who specialised in lovely metal work.

The slight trouble with an aluminium set is they can feel quite light. I have grown to prefer a heavier cup – so this copper set – which doesn’t include a chop cup – might be more suitable. But it is somewhat more expensive given the current price of copper! 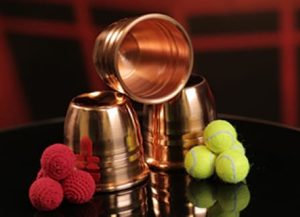 In a similar vein, but to my mind nicer looking cups are the PFD Cups and Balls. They also come with a good selection of balls which is a bonus.

If these feel a little on the expensive side, then I have been told by a friend I trust that the Indian produced cups and balls are very good – but I have never personally handled them.

Finally, if you really want to make a serious investment on some pro quality cups, I would highly recommend the ones produced by Brett Sherwood. These are the bees’ knees. And you can read an account of my encounter with Brett and see some photos of the cups.  My working set is a Sherwood combo set.

Resources for learning the Cups and Balls

(I will update this as I get round to writing further reviews.)

The Chop Cup is, of course, a very different beast from the Cups and Balls. But for the sake of completeness I will include links to some Chop Cup Reviews below, since I have a bit of a thing about chop cups…