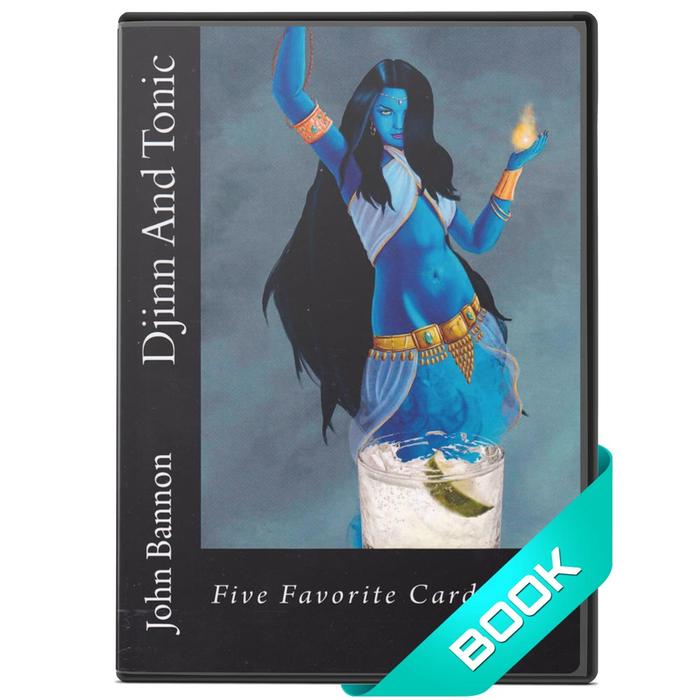 By way of a late hat tip to National Gin Day (which I just missed!) we’re going to review another limited edition John Bannon release, amusingly entitled Djinn and Tonic. This little booklet containing five fine card tricks complements Lucky,  which we reviewed earlier, as the supporting act on his recent lecture tour.

All of the effects in the booklet have been in print before – so if, like me, you are a Bannon aficionado, you may well be familiar with some or all of them. If not, you’re in for a treat!

What’s on the menu?

Montinator 5.0 (see also Fractilicious and The Full Monty if you prefer to learn in DVD format; it was also apparently published in High Caliber – but I still haven’t tracked down a copy of that – hint hint!) is an absolute beauty. Loads of magic packed into a neat little packet with an entertaining plot.

The spectator tries to keep track of one queen (with a different coloured back) amongst a packet of jokers (all of which have the name of the card on their backs) – yet suddenly they change into 3 queens and one joker. That bald description doesn’t do justice to a punchy and fooling trick which is fairly easy to do. Oh, and did I mention all the cards are included (though my comments on the cards which are supplied with Lucky also apply here).

Collusion – elsewhere I have described this as a pseudo-ACAAN. I think these days I might call it a distant cousin. But I love this effect. 2 spectators create a card and a number in an extremely fair-looking way – and yet that card is at that number in the deck. I enjoyed his ‘thinking out loud’ about the dressing for the effect. Love it. So easy to do and yet very fooling. Can’t work out why I haven’t used it more. Going (back) into my repertoire.

Origami Poker (revisited) – I first came across Bannon’s work on this idea back in the superb Dear Mr Fantasy and have subsequently seen it on Move Zero 3 and Bullets After Dark. In effect, after a crazy fair looking mixing procedure with all sorts of freedom you end up with a Royal Flush. I don’t think I rate this effect quite as highly as Bannon (though it is very clever) – but I love the way he writes it up – in the narrative styles which made Dear Mr Fantasy such a fun book to read!

Power of Poker – is an wonderfully clever effect where the spectator makes all the choices and yet you still control the outcome and win the poker match. Again, I saw this first in Dear Mr Fantasy (and it reappeared in Move Zero 4 and Bullets After Dark) and having read this again I’m going to go and make it up in Jumbo Cards and add it to one of my stage sets!

The Bannon Triumph/Play It Straight – (From Impossibilia, Six. Impossible. Things and Bullets after Dark) – a twist on the classic Triumph effect where clever routining reduces most of the work. A card is selected and the rest of the deck mixed face up and face down. In a flash all the cards turn face down apart from one suit of cards. The missing card in the suit is the spectator’s choice. 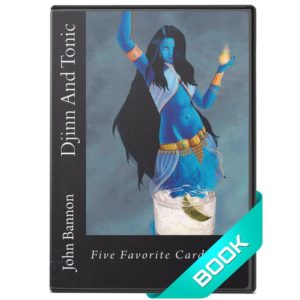 This is, no doubt, an excellent trick. And as Triumph’s go it is pretty easy to do – which is a massive bonus. But I personally prefer the original Triumph premise and find the outcome here just a little bit of an anti-climax. But each to their own. All that being said, Bannon suggests using it after performing the original Triumph and that could have legs…

Djinn and Tonic is a superb little booklet. I’ll be honest – if you already have a good collection of Bannon material then there won’t be too much new. But if you’re new to Bannon this would be a great introduction to some of his best effects. And the inclusion of the cards for Montinator 5.0 means you can get going straight away.

A good release. And available in the UK exclusively from our chums at Big Blind Media for £19.97 (at the time of writing – but also part of this great value bundle if you’re quick.

With many thanks to BBM for supplying the review copy.