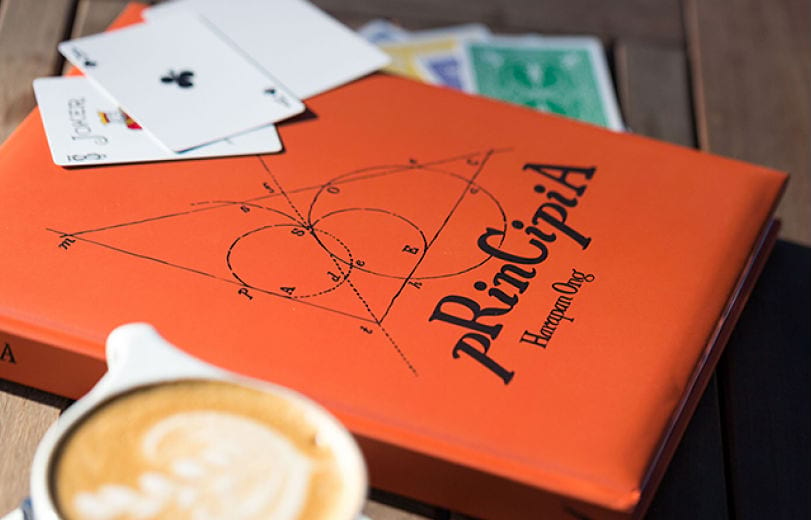 Principia is a book I’ve been excited about reading for over a year. Unfortunately life circumstances have prevented me from spending any time within its beautiful covers… until now. So here, probably in time for the second print run (!), is our Principia review…

If you’ve not come across Harapan Ong, he is a Physics teacher from Singapore, and also a very talented magician. And in this unusual book, he merges those two worlds by teaching some of his excellent magical material in the style of a series of science papers.

I think reading John Bannon’s seminal Dear Mr Fantasy was my first introduction into the world of quirkily written magic books – and I loved it then. I’m a die-hard magic book fan with more magic books than you can shake a stick at (ask my wife – she’ll tell you…) – but I have never come across one like this.

In truth, the description of the method (in Principia terms, the ‘result’) is fairly conventional. However, it is the elements around it which contribute to the overall style. Each ‘paper’ begins with an abstract giving you an overview of the effect and some comment on method. An introduction then analyses the background/inspiration/development of the effect and a section called ‘methodoloy’ summarises the requirements. After the main description of the handling (the ‘result’) there is some analysis (strengths and weaknesses of the handling) and a conclusion. Both the abstract and the conclusion often highlight areas for future exploration/development.

Although I am not a scientist in the professional sense, I studied some science in the past, and I definitely have an analytical and problem-solving-shaped brain. So this structure to the book, though unusual at first, really grew on me. I’m a firm believer that any magician worth his salt ought to be thinking about developing their own routines, and twists on existing routines etc. And this style of description was very stimulating in that regard. The ‘academic’ style also includes excellent referencing/crediting – which is another important concern of mine in magic.

Back to first Principias

This is a big book – large format (dimensions) running to over 250 pages. It is lavishly illustrated and the 2-column format works really well to ensure the beautiful line-drawings are in an appropriate place in relation to the explanatory text. A suitably scientific-looking illustration adorns the orange cover. My only slight negative note on the look of the thing is the ‘puffy’ nature of the covers. I prefer simple board covers – but this is entirely subjective and affects nothing!

I’m reviewing the first edition – which came with an accompanying packet of gaffed cards to do some of the effects described. If you’re too late for the second edition, most of these gaffs are readily available in standard Bicycle gaffs – but there are one or two which are a little harder to get hold of. I don’t really know why Vanishing Inc don’t sell these separately – and I’m sure they will do before long.

The book opens with a generous forward from Joshua Jay – who has been something of a mentor in Harapan’s development as a magician. This is followed by a brief introduction from the author which explains some of the book’s form and inspiration.

Before we get to the tricks, there is an introductory essay called Thinking Like a Physicist. This draws out some of Harapan’s philosophy of magic as well as making some interesting comparisons between the two fields of magic and physics. He emphasises three priorities in striving for ‘beauty’ – economy, unexpectedness and inevitability. Whilst those last two might seem to be contradictory I find myself with a lot of sympathy for these priorities.

There are far too many effects to describe in detail. So I will describe the shape of the contents and then simply highlight some of the effects which appealed to me.

The first section of the book describes some of Ong’s thinking on classic plots in card magic. He often starts with an existing move or routine and seeks to streamline the handling or add a new twist. You’ll find Ace effects, Sandwich tricks, Triumph routines, four of a kind productions and much more.

There were many strong effects here. I particularly enjoyed the blending of Dr Daley’s Last Trick with a Sandwich effect (3 variations) – which seemed like an excellent addition to a trick which is already strong. If you like ‘Twisting the Aces’ type effects, then Twisting Morph adds an extra kicker to this plot and is economically routined. I also enjoyed Direct Triple Prediction (which does what it says on the tin!) – and was amused that the idea that occurred to me as I was reading it was then highlighted in the analysis at the end! I could see this going straight in to my repertoire.

The subheading for this chapter is ‘More involved and unconventional card plots’ and that feels like a fair summary. I’ll be honest, I was less-grabbed by some of these routines, though there were some routines with clever gimmicks (you need to make or in some cases buy) to produce some fun visual effects.

I was probably most taken with Perspective – which is a really interesting twist on the Do as I Do plot – with lots of magical moments. I also enjoyed the plot of a little packet trick called Countdown Packet – where the face values of the cards change with the number of cards in the packet as you keep removing cards. This felt like a great plot and a decent method.

The packet tricks have landed. I have been a packet trick junkie since I first discovered Rainbow Cascade in Davenports in the 80s or 90s. So I was looking forward to this chapter. But when I got to it I was a little disappointed. It felt like there was a bit of an over-reliance on a 2 for 4 count which doesn’t seem that strong to me. On the other hand, I really appreciated the attempts to routine small packets with the random extra cards that come with some of the many new decks. That is something I have meant to have a go at for some time. I didn’t think these were amazing, but they were a good starting point for further exploration.

Beyond the Standard Model

This one is subtitled ‘Curious effects and gags for card magic.’ It contains some interesting ideas but they sometimes feel more theoretically elegant than practical. First is an exploration of that curious phenomenon of ‘Ambigrams’ – writing which says two things depending on which way up the writing is. It felt, here, like he had set himself some constraints and found a solution without really giving much thought to entertaining magic – this was clever but a little contrived.

Checkmate takes the idea of an 8-ball production and changes the gag to streamline the production – the chess piece produced being smaller. I can see some reasons to do this, but it seems to lose some of the impact. Have a break is an amusing idea if you want to make magicians laugh but I’m not sure I would use it in the real world. I really liked the Flexacard concept – which appeals to the maths geek in me (I’ve always been fascinated by these kind of objects) – but again I think probably more of a private amusement than something for performance.

The effects in this chapter are designed specifically for performing on video – which is very much home territory for Harapan who first launched his work in this arena. I liked the fun concept of the Frog Price – and the clever use of a principle normally used in a quite different way for 2 + 2 = 4. The ‘Hybrid Flexagon’ described under the heading of 4,3,2,1 is something I will almost certainly have a go at making, but I’m not sure it really fits the criteria of the chapter.

This final chapter was a really interesting one for me. In it Harapan explores the concept of multiple pathways in magic effects, with particular reference to the Trick That Cannot Be Explained. I enjoyed reading his thoughts from the point of view of the construction (and interpretation) of magic effects and some of the ideas there are worth pondering if you are serious about shaping your magic for greater effect.

I had some philosophical disagreements with his discussion of evolution and intelligent design in some of the essays – and not just because I am coming from a somewhat different worldview to his. I feel that the analogy was somewhat strained – not least because (as he identifies on p224) the magician himself plays a significant role in the artificial selection of the optimum path. The relative weakness (to my mind) of some of the argument in these essays doesn’t detract from the usefulness of the ideas and concepts he explores.

Principia is a beautiful and stimulating book which would grace any magician’s library. I was impressed by the clarity of the explanations – his background in teaching definitely comes into play here. This is a book you will want to peruse slowly – with a deck of cards and a bottle of wine (or your own favourite tipple) – since there is much to enjoy and reflect upon. For my money the first (and largest – almost 36%) section of the book contained the strongest material. But there is plenty within the rest of the book to get you thinking and exploring. Highly recommended.

You can pick up Principia from MagicShop.co.uk for £48.99 (at the time of writing).