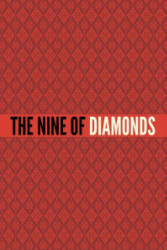 The Nine of Diamonds is the first volume published by a group of Scottish magicians who meet regularly under the same name. It is a nicely produced book – well (photographically) illustrated throughout – and each chapter is preceded by a story about the significance of the Nine of Diamonds – a traditionally unlucky card. It is these kinds of small touches which show the care which has gone into the book and make it a pleasure to read.

Don’t judge a book by its cover – so the ancient wisdom goes. But I have to say that first impressions here were very pleasing. I am a great fan of magic books and have a reasonable collection, but in a world where every other book is a paperback (perfect-bound or otherwise!) it was nice to receive a hardback book with an understated and stylish cover.

In a reversal of the often traditional order, the first chapter details the sleights and techniques used in some of the following routines. For those that want to get straight in to the magic this might seem surprising, but there is a certain logic to giving you the moves needed before you get to the actual routines. The moves, as you would expect, are primarily card-based, but there is also a coin sleight and a couple of stacked decks. Most of the sleights originate in the group, but the credits for each move and its development are given. There are some useful little moves here – some are a bit ‘knacky.’ But then most good things need working for…

The next three chapters contain 17 effects and there isn’t time to review them all in detail.  But here are some highlights and reflections.

We’ll start in chapter 4, titled ‘Some Assembly Required‘ which points to the non-impromptu nature of these effects.

ACAAN.  As an ACAAN geek, this was the first routine I turned to.  [NB: Each effect has a quirky caption, quote or comment before it (another of the little details I really appreciate about the thought that has gone into this book) and the ACAAN quote tickled me – “Amaze your fellow magicians, bore your friends”.]  There is some clever thinking in this routine (which owes a little to one of my all time favourite ACAANs – Barrie Richardson’s Impromptu ACAAN) but as its creator hints, it is probably more of a magician fooler than an everyday worker.  A great addition to the genre though.

I Don’t Trost You is a neat little Poker deal with some subtle handling to fool the spectators.  Buckley’s Angels is a really entertaining routine – a reworking of a classic routine from the 40s.  It requires a few sleights you will probably already know but manages to pack a lot of magic into a small space.  Really strong.  Another Flippin’ Collectors does what it says on the tin, but requires a bit more competence or practise!

Sesame Street is a sort of Do as I Do come prediction routine.  I really like the routining, and a small set up means there is not too much hard work to do.  Very clever.  Lazy Man’s Memory Test is a simplified version of a three-phase routine by Bill Malone which doesn’t require the memory work!  The final effect in this chapter, Two Faced Mother FIRPer is a card to card case routine with no palming, but it does require the FIRP move, taught in chapter 1.

Continuing to work backwards, chapter 3 is entitled ‘Minus 52‘ since it contains non-playing-card magic.  A Small Price to Pay is a prediction routine using coins.  There is a Quick’n’Dirty 3-Fly routine which still requires more competence with coins than I have!  This is also true of Quick’n’Dirty Hanging Coins which is described as an impromptu dance with three coins.  The final routine in this chapter is called The Zen Stack.  I have a fondness of mental magic and this is a sneaky stack for an ESP deck which to my mind has many uses beyond the ‘thought transference demonstration’ outlined here.  Very clever thinking.

Chapter 2  is called ‘OK Show Me Something‘ and contains half a dozen card effects.  Jack’s Departure is a variation on Elmsley’s classic ‘Point of Departure’.  To an entertaining patter routine a chosen card vanishes from amongst four of a kind a reappears in the deck.  Amass Aces is a nice borrowed deck routine where the aces are used to locate the mates of a previously unseen selected card.  The routining is clean but does require a few moves you may already know.

Regurgitator requires a couple of moves taught in chapter 1 – both of which are a bit ‘knacky’ – but provides an amusing way of locating a chosen card from the ‘mouth’ of pair of playing cards.  In Radical Decency two Jokers visually transform into two signed and lost selections.  Still Smiling is a sandwich effect.  If I’m honest, this one didn’t do much for me.  Sorry.  Frankenstein’s Bunny is quite an involved routine where the four queens locate a chosen bunny rabbit!  It is well explained and illustrated to teach the various moves required.

Although I really enjoyed the magic in this book, magic books aren’t just about the magic.  I loved the informal and quirky writing style and all the thought that has gone into the presentation of the book which make it an enjoyable read on top of everything else.  They also do a good job of crediting influences and references which is important.  All in all this is a first-rate first volume – I’m looking forward to the next one?!…

Available for £24.99 direct from the authors at The Nine of Diamonds.