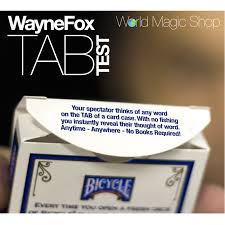 We love a bit of mind reading and we’ve almost always got a pack of Bicycle Cards on us – so we were instantly intrigued by the concept of the Tab Test. Interestingly the normal ad copy doesn’t actually describe the effect – but in essence it is a piece of mind-reading where the magician can divine the word simply thought of by the spectator from the tab of a card box.

Although I don’t like the way we throw around the word ‘organic’ today –there is something natural about using the card case for some mind-reading – which can either add variety to your card set or transition into a mentalism segment. You’re provided with a number of gimmicks which seem well made and enable more than one outcome if you’re repeating it in an evening.

The teaching is clear, the DVD simple but nicely produced, and a couple of variations are taught – including a version which will leave your business card in the spectator’s hand.

Hmmm. I’m not sure there are real ‘bad’ points, but there are some less good things! The ‘tabs’ you are provided with don’t match current Bicycle tuck cases. Now I am not one of those who think this is a deal breaker – because how many spectators know what a tuck case really looks like? So this is probably simply overthink/magician’s guilt for some people.

To be most effective the performance does require a bit of careful scripting and a certain amount of boldness. In my mind, almost any mental magic effect worth its salt needs both of these – but I’m just warning you that you might not be able to perform the strongest version straight away. This is one of those tricky things to evaluate – it isn’t something ‘difficult’ you are required to do – but does require confidence to sell it fully.

There’s a lot we like about this, but with a few reservations. Although Wayne describes it as a big set piece – I’m not sure that I see that. It feels like a smaller effect – perhaps, as suggested, making that transition into a set of mental effects. It has the potential to be genuinely fooling, but feels a little over-priced at £26.99 (at the time of writing).

Available in the UK direct from MagicShop.co.uk.
Review copy kindly supplied by Murphys Magic – to whom all dealer enquiries should be made.