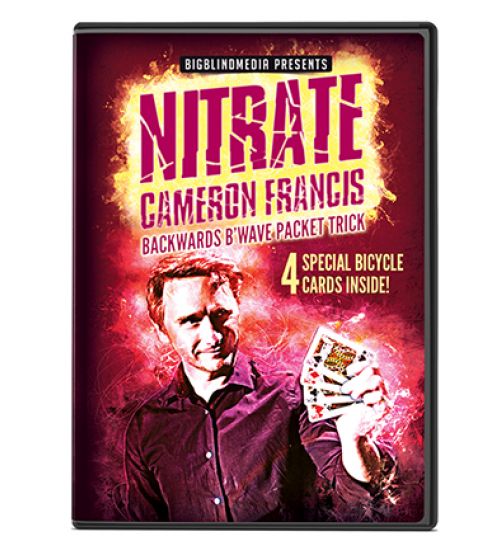 Nitrate is the latest release from the genius that is Cameron Francis. He takes a well-travelled plot (B’wave) and using a different method brings some great extra climaxes to the routine. And this review is doing double duty this month as Trick of the Month.

Briefly, the spectator chooses one of the four kings. This turns out to be the only face up card in a pack of 4. Then all the other cards are shown to be blank. The King is tabled and in an instant turns blank – and the remaining 3 cards turn blank. Everything can be examined at the end. Actually, that last bit isn’t true. But their jaws will be dropping so much you can just quietly pocket the cards. 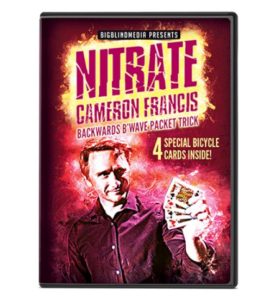 You get all the necessary cards, and also (and I love this) both printed instructions – you know, using words – and a link to a video explanation. The video lasts about 16 minutes and includes explanations of the necessary sleights.

But if you’ve been around in magic for a while you’ll be able to jump to the chase much more quickly with the printed explanation.

The video is nicely filmed to normal BBM standards with clear explanations aided by the unflappable Liam Montier. It includes brief explanations of the Boris Wild’s Kiss Count, Vallerino’s Rumba Count and some more widely known counts and moves.

Nitrate is a really fun effect to perform and packs a lot of magic into a short space of time using just four cards. 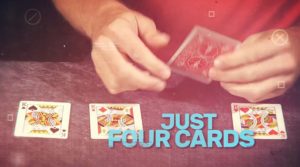 Cameron is clear – his presentation is a magic trick not a mentalism effect – and I think that’s a great call. A few ‘normal’ packet trick moves are required – but if you’ve been in card magic for any length of time you will have no problems with this.

Often in packet tricks that include this kind of instantaneous transformation often use some extra gaffs (which have often been treated roughly – let the reader understand) – one of the great strengths of Nitrate is that the cards can be handled so freely.

I know that I am a bit of a Cameron Francis fanboy – but Nitrate really is a very good addition to the world of packet cards. Many people ‘improve’ a standard and end up with a complicated or confusing routine. Cameron has managed to give a logical plot to justify his changes and produced a super piece of magic.

Buy it, you won’t be disappointed. Nitrate is available at magicshop.co.uk for £18.99 (at the time of writing).