A clutch of new Bicycle Cards

It has been some time since we’ve looked properly at any new Bicycle cards, and the following four decks had been languishing unloved in our cupboard for a few months. So as the sun was shining we thought we’d put them (briefly) through their paces and take a few pictures to share with you.   (Apologies for the table – I was on holiday and failed to bring a nice close up mat with me…)

Let’s look at the decks in turn. 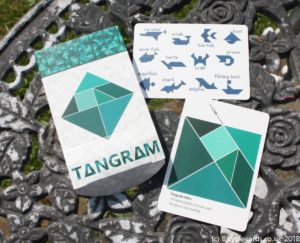 First up is in some ways the weakest of the four. I’ve been playing with tangrams since I was a kid and even bought my own children a set to play with – so I love the concept. It is a novel idea and it is great fun to have a card with a tangram to cut out and play with – and another with some shapes to try to make. 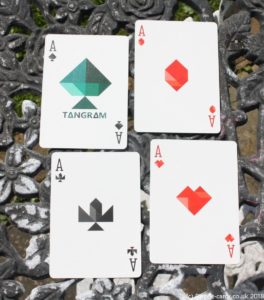 But as a deck of cards it has some flaws. Although it is a clever idea to carry the tangram idea into the suit pips, in reality I found them quite difficult to distinguish – which would be a bit of a problem in either 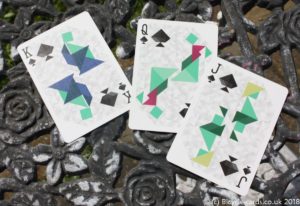 play or magic. The extremely stylised court cards did little for me.

The back design is ok but not that attractive nor does it particularly lend itself to attractive fans or flourishing. I think I liked the Jokers best. Handling is fine on nice USPCC playing card stock.

A mixed bag really, but not a bad deck for the collector or the Tangram enthusiast!

The Tangram Deck is available from MoM for £9.99 (at the time of writing). 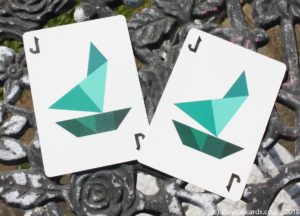 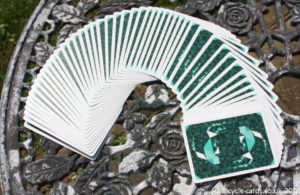 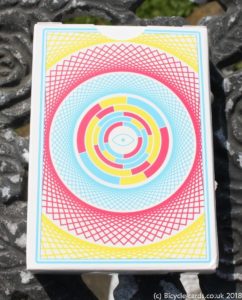 The stand out feature of the Wonder Playing Cards is their bold back design. Reminiscent of the sort of thing you could produce if you were a black belt in spyrograph (remember those?!) – in bold printing press colours which are pleasing to the eye. I’m not sure how well the design lends itself to spreads and fans – but a lot of fun to spin! 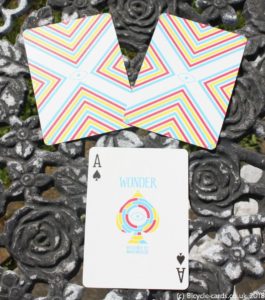 The faces are standard USPCC faces apart from the Ace of Spades. I really like the attractive Jokers – and the way the harsh diagonals contrast with the spirals of the main design. The deck also comes with a double backed card which is always useful for magic. And an extra four of hearts. I’m not sure why, but who knows when you might need an extra four of hearts!

A nice little deck.  The Wonder Playing Cards are available from MoM for £9.99 (at the time of writing). 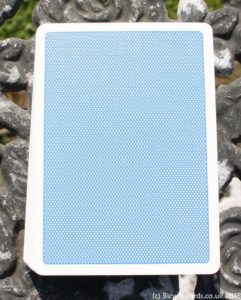 Pacakged in an unassuming blue tuck case, I think the Blue Steel Deck is my favourite of the collection today.

It has an elegant, stylish but understated back design.  For some reason it reminded me (but is not really anything  like!) the classic Bee – but it has a border unlike the Bees.

The deck has standard faces with the exception of a custom ace of spades – which is big and bold – just the way I like Aces! 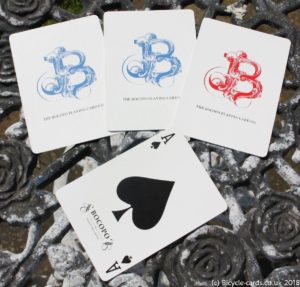 I particularly like the jokers – unusually the deck has 3 – 2 blue and 1 red  – but apart from the colour they are identical which could make for some attractive colour change effects.

All in all a pleasingly stylish deck which I could see working nicely for magic or regular use.

Blue Steel Playing cards are £9.99 at MoM (at the time of writing). 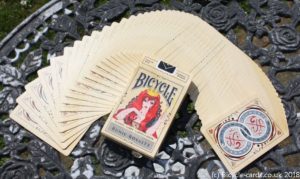 The final deck we’re looking at today is an odd one out from the rest.  It is a super limited edition (1,000 only) deck originally funded on Kickstarter (in conjunction with the same team who produced the interesting Alice in Wonderland Deck). 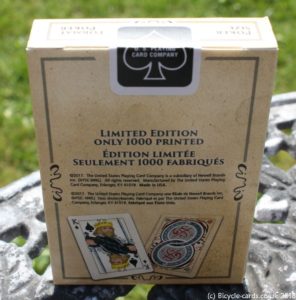 The first thing we noticed was that they are the only deck in this selection with a seal on the tuck case.  A small, but significant, feature.

They feature an ‘aged’ design i.e. both faces and backs have been coloured to appear aged – which leads to a mellow and pleasing colouring.

The Jokers are very striking, and both they and the court cards feature custom drawn modern ‘cartoon’ style imagery.  There’s a lot of detail here and I can see these appealing to lots of users.  All the pips and indices on all the cards have been custom drawn and make a pleasant change from the standard USPCC design on so many other decks. 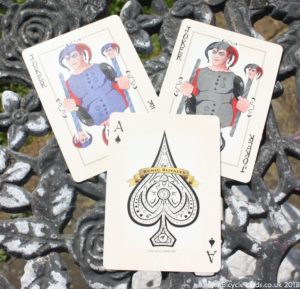 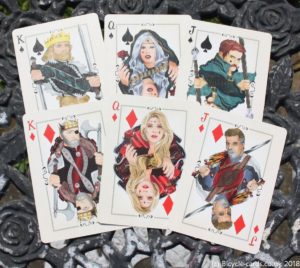 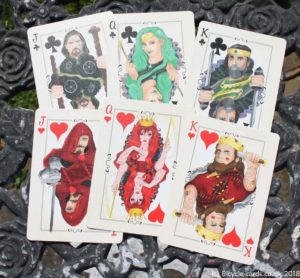 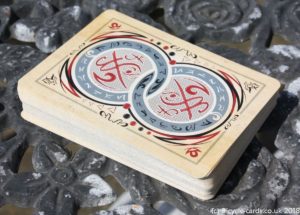 The back design is intriguing and I could see it fitting a number of interesting presentations.  Including a double-ended court-card is another really useful (and unusual) feature for a deck which might be used by magicians.  Mentalists, too, could find this useful.

This one’s going to appeal to magicians and collectors I would think. 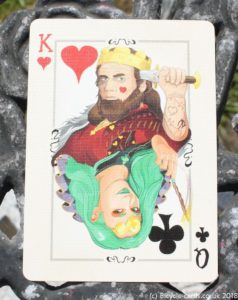 PlayingCardDecks.com are available from MoM for £17.99 (at the time of writing).

And a final word for all those who love cardistry.  I’m not sure any of the decks we’ve looked at today would really suit that kind of thing. 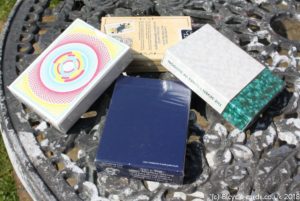 We hope you’ve enjoyed our round up of these new bicycle cards.  Keep checking back for more card and magic news and reviews.

Review decks kindly provided by Murphys Magic to whom dealer enquiries should be directed (apart from the Runic Royalty Deck which came from PlayingCardDecks.com).