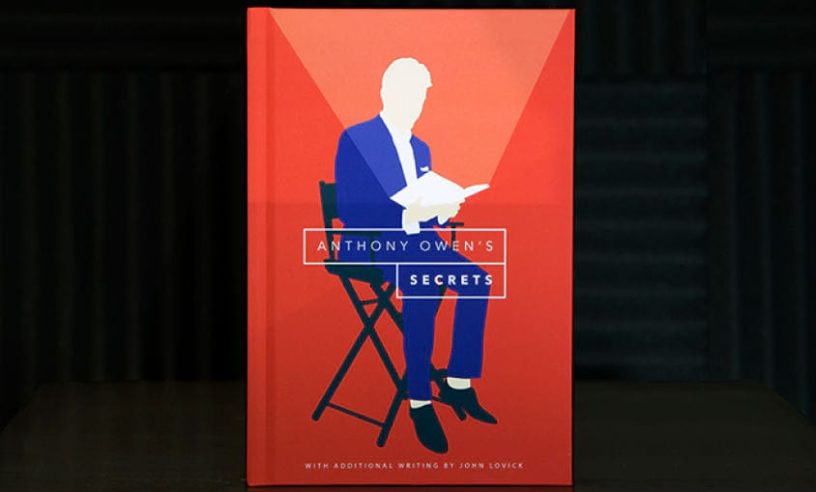 Anything with Anthony Owen’s name on it is bound to be worth a look – and the wonderful book Secrets is no exception. It is a curated collection of the best of his magic from the last 25 years – and it is full of gems. Some of them have been published before, or even released as stand-alone effects, but there’s plenty of new material too.

If you’re new to this magic business, Owen’s may be the best known magician you’ve never heard of – since for the last few years he has spent more time behind the camera and creating magic for other more well known magicians. Odds are you’ll have seen some of this material on TV!

Like all of Vanishing Incs’ books Secrets is beautifully produced. It is a 237 page hardback book (no dustjacket) with a simple, stylized cover, clear and helpful illustrations from Tony Dunn. The writing style is crisp and engaging with a gentle humour often thrown in.

What about the tricks…?

These are spread over 8 chapters – and there is some brilliant stuff here. A review of this length can’t go into exhaustive detail about all the effects. Instead I will make do with drawing attention to some highlights. But I really don’t think I found a bad trick in here.

In the first chapter he gets stuck in (did you see what I did there?!) to an area he is well-known for developing (see for example the Sticky Blue Book). It starts with his super-clean and super-easy Oil and Water routine (and some developments by others of that routine) but there is so much more. A brainwave type effect with a borrowed deck; a super prediction effect using Ikea products, a signature transfer effect, the fabulous Miracle Monte 2.0 and much more. Strong stuff.

Chapter two looks at a sleight and some variations on it, followed by some routines (by card magic luminaries Roy Walton and Peter Duffie) using it. A nice move, but the effects felt a little contrived to me.

The next chapter is all about the coins. It was interesting to read a routine using the cigarette through coin gimmick which I don’t see used so much these days – perhaps because it is increasingly difficult to smoke in public places. Anthony’s routine uses a pencil so may yet breath life into that clever gimmicked coin. Some nice touches here. There’s also a clever matrix routine – where you don’t touch the coins with your hands! 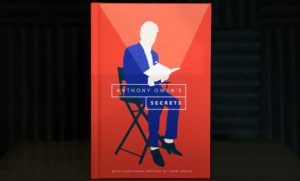 Chapter four is devoted to variations on that all time classic – Out of This World. Some clever thinking on an already devious trick here. Worth a ponder.

A variety of card effects fill the next chapter. There are some killer effects here. I particularly like the John Lenahan collaboration called the Miracle Card which is a version of Alex Elmsley’s Between Your Palms. It has a whimsical plot and the climax is strong. The Birthday Deck is also a great distant cousin of the diary effect in which you accurately predict someone’s birthday. Definitely worth making this one up.

Anthony’s opener (from when he performed more often) will teach you some useful things about approaching a group in a strolling situation. This and a couple of other unusual tricks fill chapter 6. I was intrigued by the collaboration with Marc Paul which I can best describe as the Anniversary Waltz with a matchbook! It is guaranteed to score you a perfect date!

I have a fondness for mentalism which is the subject of chapter 7. It starts with an excellent take on the Kolossal Killer – which has some very nice touches. Then a very bold take on Eddie Joseph’s Premonition, a variation on the ACAAN plot which is really sneaky and a great Lottery Prediction.

The final chapter covers tricks inspired by or for performance on television. One of my favourites in this chapter is the Ring on Notepad in which a notepad of instructions for a new trick becomes the final destination of a spectator’s borrowed ring. There’s a highly involved routine in which the performer takes a gulp of coffee and then proceeds to ‘separate’ it into its constituent parts -water, coffee granules, sugar and milk!

There are also some fun routines which can be done interactively – over the phone, via skype, or on screen when you get your own television series! The chapter ends with some tips on performing for television (or YouTube, etc.) – and if you want to do any of this you really should listen to Mr Owen who has decades of experience in the field!

I thoroughly enjoyed reading Secrets. Owen’s enthusiasm for his art seeps through the pages and I sense a kindred spirit in one who loves to read magic books and come up with new ideas. I don’t think there is a weak effect in the book (though obviously not every effect will suit every performer) and there is something to learn for everyone.

There are some great little performing hints and tips hidden in the instructions – so a careful reading of this book will pay dividends even if you didn’t end up using a single effect from the book. But I think you probably will.
Buy it. Read it. Enjoy it. Make up some of the effects and fool your audience badly.

You can pick up a copy of Secrets from MagicShop.co.uk for £41.99 (at the time of writing).