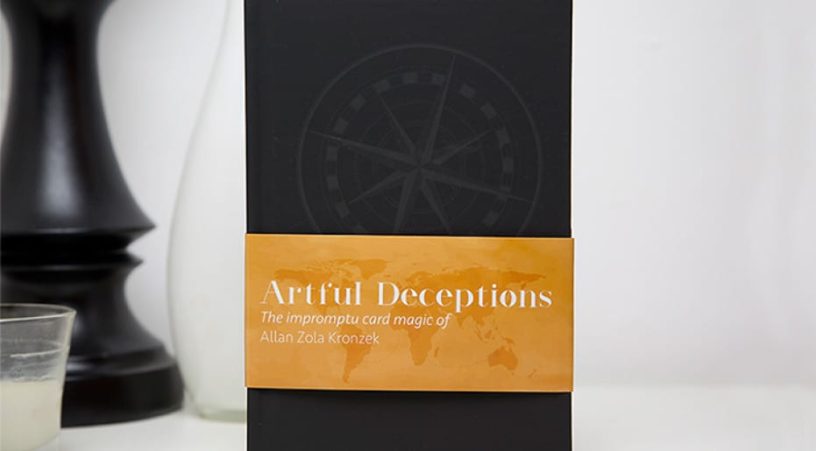 Artful Deceptions is definitely an understated magic book. A slim volume, at only 94 pages, with a discreet bordering on minimal cover, but don’t be fooled. It is well worth your attention, as this brief review will try to explain.

Allan Zola Kronzek may well be a name that you’ve not come across before. I first came across his name in relation to an earlier book – The Secrets of Alkazar. This inexpensive volume is pitched as a beginners’ book – but friends on magic forum raved about it so I picked a copy up. And sure enough it is well worth a look for magicians of any level – since he has a deep understanding of how the setting and performance of an effect changes everything – making this a more valuable volume than most beginners would appreciate. But I digress…

Magic and the Art of Play

Kronzek’s philosophy of magic is briefly encapsulated in the introduction which places close up magic firmly in the realm of play. And it is this insight which shapes the routines in Artful Deceptions. Most of the effects in the book are ‘classics’ but Kronzek brings to them a presentational hook and framing which dramatically improves them. Apart from the final chapter which is a presentation (not a method) for the Bill Switch (see Switch if you want details on the working), all the effects use cards and are pretty much impromptu. I’ll take you through the effects.

Playing With the Jokers – is an effect Kronzek uses as an opener when strolling. It is a whimsical location of a spectator’s card – as the two jokers vanish and sandwich it. But it comes in three phases, each getting stronger. Whether you like it or not, learn from the framing which sets your spectators at ease.

The Mirror – is, to my mind, the most engaging presentation I’ve ever seen of a trick I probably wrote off decades ago! It is a setting for the venerable ‘Do as I Do’ – which lifts it right out of its normal ‘mildly puzzling’ mode and makes it an engaging piece of theatre. Love this.

True Romance – applies similar thinking to the classic Gemini Twins effect which many of us perform. I love the framing here – which probably beats Anniversary Waltz in terms of pure ‘significance’ for a couple of spectators. But it does require a few more moves than the original. Worth the effort though – and you will learn a move which you probably haven’t seen before.

Strange Attraction – using the move you’ve just mastered in the previous effect, this is a quicky in which a spectator touches any card in the deck and manages to find two other cards previously only glimpsed by two other spectators. Very clever and worth a look.

Buried Treasure – with the aid of a compass, a spectator’s card which has been lost is relocated. I didn’t enjoy this one so much, but again it shows a solid grasp of framing an effect in a more engaging way. And maybe you’ll love it!

Think of One – a real sneaky mind-reading effect in which you divine a spectator’s card that they have only thought of. This one requires a certain amount of presentational confidence and brain work, but again the script is worth examining for many useful features.

Texting the Visitor – is a quirky presentational angle for Larry Jennings’ effect ‘The Visitor’. There are some nice subtleties here and the presentation brings a trick which I would otherwise find rather dull into a much more interesting place.

Destiny, Change and Free Will – riffing off an idea from Card College Vol 1 – this is a super effect where the spectator locates their own card using a ‘coin of destiny’. But the card is also shown to have been predicted from the outset. I love everything about this effect. Once you’ve prepared yourself the coin (which is much less complicated than that clause makes it sound) you’ll be performing this often.

Hypnotizing Ben is the script for the $100 bill switch mentioned earlier – and is a lot of fun. 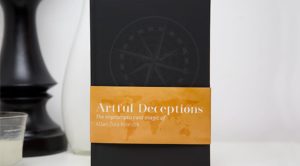 I thoroughly enjoyed reading this little book. Kronzek writes in a clear and engaging way making it a joy to read. The routines are almost without exception very strong – and I can easily imagine using several of the presentations myself. The book is nicely produced and well illustrated – I even like the ‘sleeve’ around the outside. In fact the only thing I can find to criticise is that several slights are referenced but not explained. Sources are given – and if you’ve been performing card magic for any length of time you will already know most if not all of them – but it might have been helpful to include at least a basic description of these.

That one small criticism notwithstanding, I highly recommend this book. Even if you don’t use a single routine, you will learn much from the construction and framing of each piece.
Artful Deceptions is available from MagicShop.co.uk for £25.50 (at the time of writing).