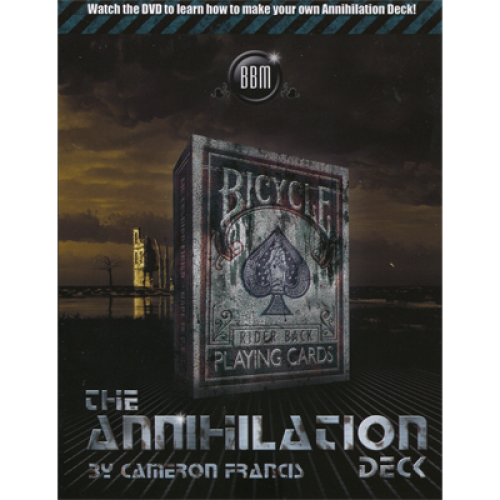 The Annihilation Deck is the latest offering from Cameron Francis, produced by BBM. So what is it? The basic effect is a prediction effect. A card is chosen in a very free way, and then two prediction cards are revealed which are said to reveal the suit and the number. The trick appears to have gone wrong, until the cards are turned over to reveal exactly that drawn in bold marker on the back.

How does it play?

The effect is certainly very clean, if ever-so-slightly contrived (by this I just mean, if you really could predict someone’s choice of card, would drawing the value and the suit on the back of two other cards be the way you would do this – but to be honest quite a lot of magic falls into this category!). The advertising is correct that it requires no memory work or forcing etc. etc. and so it is essentially self-working.  There are lots of things which make this appeal to me very much. It can be done ‘in the hands’ so is good for walk-around.

The deck is obviously ‘prepared’ and so requires some preparation time. However, this won’t take too long and is very clearly explained on the DVD, and once it is done it is done. The trick requires a very simple re-set which can be done easily. 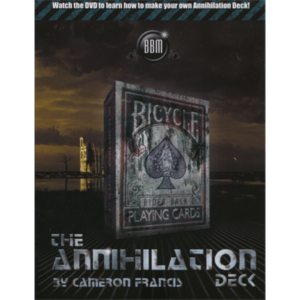 Two variations on the original effect are provided. Total Annihilation seems to be the way Cameron prefers to perform it (there are 3 demo performances of this on the DVD!) and is essentially the same effect, but with the added element of ‘introducing’ the prediction cards at the beginning of the effect. Red Hot Annihilation is a variation in which the prediction cards have a contrasting back colour.

I like the effect, but for me, some of the extra effects on the DVD are even stronger. Do as I Predict is a kind of one deck do-as-I-do, where you and the spectator both freely select a card from a genuinely shuffled deck. Not only do your cards match, but they also match a pair of prediction cards from a contrasting deck which were in open view from the beginning. This is very neat, and requires only minimal sleight of hand, and the deck can be used freely in other effects before and after. It does require use of a table.

Red Lite is another self-working prediction effect in which two cards freely chosen by two spectators are found to predict a ‘randomly’ arrived at card in the deck. This is a clever bringing together of some principles you may already know and I think a strong effect.

But my favourite effect is called Convergence. Regular readers will know of my particular fondness for ACAAN type effects, and that is what we have here. And I love it. Here’s how it looks (BBM’s description):

The magician proposes an experiment in fate as he introduces two decks of card; one red & one blue. The blue deck is placed in front of a spectator and the magician never touches it again. The red deck is removed from its case and shown to have a different number written on the back of each card. A second spectator then names ANY card (Really!). We’ll say it’s the Two of Diamonds. This card is removed from the red deck. Another card is randomly selected, and the number on it’s back is noted (let’s say the number is 29). The spectator now uncases the blue deck. He counts down 29 cards… The 29th card is the Two of Diamonds!

I think this is really strong. The decks can be examined, no memorization or cribs needed, no real sleight of hand and it resets instantly. Obviously you will have to set up the decks which will take a little time, but it seems to me a real worker. I know that it is common place in magic adverts to say ‘worth the price of the whole dvd/book’ but I really do think this one is.

All the effects are explained on a DVD made to BBM’s usual high standards. Some will be annoyed by the graphics and the music, but I personally find them easy to watch and well shot. Some of the ‘subtitles’ made me laugh out loud and I enjoy Cameron’s slightly quirky way. Explanations are all very clear. There are some extra adverts/plugs (including regular references to the Karnival Decks!) – but most of these are in the ‘extras’ section, so you don’t have to watch them. You also get a free deck of Bicycle Cards so you can make up the basic effect straight away.

At only £15.99 direct from MoM I think this is great value. And I’ll be making up Convergence as soon as possible…  [you can also purchase it as a video download]