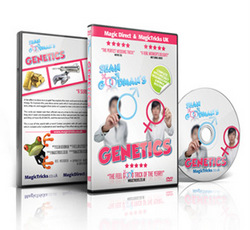 Every so often a routine comes along and you think, this is so good and so commercial and so obvious – why didn’t I think of it before! We think Genetics by Sean Goodman is just such a routine.

“A fabulous effect to show to a couple! You explain that men and women think differently and like different things. To illustrate this, you show some cards which have pictures of various items such as a dog, cat, iron, whip etc. and suggest that some will appeal to men and some to women.

The cards are mixed and then offered one at a time to the man and woman alternately. Any cards they don’t want are discarded. At the end, to their amazement the man’s selections are turned over and they all have BLUE BACKS, and the woman’s have PINK BACKS!”

If you’ve been in magic any length of time, you will probably already know the method.

But nevertheless there’s lots to like here. It is easy to do, which means you can focus on the presentation. Always a plus. It is a rare trick in that it will appeal to men and women alike. There is the opportunity for bags of audience interaction. Oh, and did I mention it is easy to do!

The packaging is attractive and styled after a movie release. The DVD explanation is extremely clear with appealing and obvious navigation. Sean comes across well and I enjoyed his discussion of the creation of the effect. And you will find his habit of nodding to camera at the end of each section to show that it is over either endearing or annoying!

In addition to the basic presentation, there is an alternative presentation, and a bonus effect which could be incorporated into either. For my money, the alternative presentation isn’t as strong, but it would still go down well. And it will help you to think about other possible routines, because, without giving anything away, there is scope with these cards for a number of effects. I am also pleased to see a live performance with ‘real people’ – since that gives you confidence in the effect.

The cards provided are nicely produced and the graphics, in particular, are very pleasing. I have some doubts about how long the cards would last if used regularly – and I know of some folk who have decided to laminate them for this reason. For the price of the effect (£26.99) I do wonder whether some slightly more hard-wearing cards could have been provided. Perhaps they will offer ‘refill’ sets in the future.

My only other minor criticism is to do with the ‘self-working’ nature of the effect. Presentation is important above all things with this kind of effect (well with any effect really), and for the less experienced performer, I wonder whether Sean could have provided a little more advice on this. You do get the opportunity to watch him performing it live, but maybe one or two more specific tips would have been helpful.

A ‘reset’ is involved, between performances. But there is an alternative way of handling the routine which would avoid this. I would have to use both in the real world to comment on this. Similarly a table is preferable, but you could use people’s hands as a stand in. So I don’t think either of these things are issues.

All in all this is a great effect – and it will certainly be making its way into my working set. Highly recommended, especially if you do a lot of wedding/round the tables type maqgic.

Available direct from the producers at MagicDirect.com